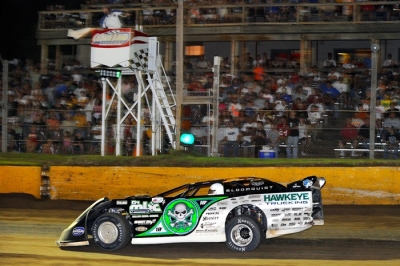 Scott Bloomquist has one lap for $50,000. (thesportswire.net)

Nothing could stop the superstar driver from Mooresburg, Tenn., from pocketing the $50,000 top prize in the 23rd annual event presented by U.S. Steel. He came back from an early spin, a late-race pit stop and a penalty for a red-flag infraction to outduel fellow dirt Late Model legend Billy Moyer of Batesville, Ark., for the lead on lap 96 of the 100-lap World of Outlaws Late Model Series feature. | Complete USA Nationals coverage

Bloomquist, 46, proved to be a survivor, reaching the checkered flag first in a rough-and-tumble race that saw just five cars finish on the lead lap and eight cars still running at the end. The century grind was slowed by 13 caution flags and one red flag and lasted one hour, 18 minutes.

“The track was real demanding,” Bloomquist said of the heavy, high-speed surface conditions that prevailed on the 3/8-mile oval. “We definitely showed you have to have a strong, tough race car to make it through this thing — and we build some good cars.”

Driving his familiar Team Zero by Bloomquist No. 0, the 2004 WoO LMS champion joined Moyer as a five-time winner of the USA Nationals. He came from the 19th starting spot to score his first win of 2010 and his 19th since 2004 on the WoO.

Moyer, 52, settled for a runner-up placing worth $20,000 in his Victory Circle machine after leading laps 60-95, crossing the finish line 1.377 seconds behind Bloomquist. He started last in the 26-car field after gaining entry to the USA Nationals thanks to a provisional spot for being the highest-finishing driver in Thursday's tuneup who didn’t qualify.

Chub Frank of Bear Lake, Pa., finished third in his Rocket car after using a WoO LMS provisional to start 25th. He quietly advanced with help from the race’s heavy attrition, climbing high enough to earn a season-high paycheck of $10,000.

Jonathan Davenport of Blairsville, Ga., who started 16th, finished fourth in the Barry Wright house car and 20th-starter Will Vaught of Crane, Mo., placed fifth in a Warrior machine. Both young racers persevered through several pit stops to end the event as the final drivers on the lead lap.

Steve Francis of Ashland, Ky., finished one lap down in sixth. He lost a circuit after pitting to replace the broken right-rear wheel that flew off his car as he ran fourth on lap 59.

The only other drivers still in action at the finish were Chris Simpson of Oxford, Iowa, who finished seventh despite losing five laps when he pitted for fuel on lap 82 while holding third place, and Earl Pearson Jr. of Jacksonville, Fla., who returned to the track 10 laps down after running into early problems and salvaged an eighth-place finish.

Bloomquist experienced trouble of his own just five laps into the USA Nationals when contact back in the pack sent him spinning into the infield off turn four to bring out the marathon race’s first caution flag. He recovered nicely to reach third place by the 100’s three-quarter mark, but then an overheating engine prompted him to pit during a lap-75 caution period and he returned to the track just in time to avoid being lapped.

With so many competitors already retired from action, however, Bloomquist sat in eighth place when a caution flag flew on lap 78. He hustled forward to put himself in a battle for second with Shannon Babb of Moweaqua, Ill., when a red flag was necessary on lap 89 for Babb, who overran the thick cushion in turn two and barrel-rolled twice but escaped injury in the wild wreck.

Bloomquist was set to restart second behind Moyer, but WoO officials penalized him for moving illegally under red-flag conditions. He was put back to the tail end of the lead-lap cars — fifth place — for the restart.

The penalty barely hampered Bloomquist, who immediately slid back to second when the green flag flew. He then spent several laps in a thrilling, side-by-side race for the lead with Moyer before surging ahead as lap 96 was scored to end the clash of Dirt Late Model titans.

“Billy did a good job,” said Bloomquist, “but we just had a little bit better combination or the bottom.”

Moyer, who won a WoO event Wednesday at Shawano (Wis.) Speedway, graciously accepted the late-race loss to his longtime rival.

“At the beginning of the race I would’ve never thought it would happen that way,” said Moyer, who was shooting for his first USA Nationals victory since 1993. “At the end we just weren’t quite good enough. We almost done it I guess.”

The 48-year-old Frank, meanwhile, couldn’t keep pace with the leaders over the final 11 circuits, but a third-place finish was much more than he could have envisioned after nearly missing the starting field. He had to rely on a provisional after a bad battery ground wire prevented him from using his pole starting spot in the last-chance race.

“We got lucky tonight,” said Frank, who pitted during a lap-19 caution period to raise the ride height of his car. “Sometimes you just gotta use your head. I wish the car would’ve been a little bit better, but it was too tight so I just tried to stay out of trouble and finish the race.”

Many other drivers weren’t as fortunate as Frank. Among the contenders who fell by the wayside early were:

• Don O’Neal of Martinsville, Ind., who steered Larry Moring’s car into the lead on lap two and stayed there until mechanical woes forced him to retire from the race during a lap-19 caution period.

• Darrell Lanigan of Union, Ky., who started from the pole position and led lap one and laps 20-31. He was plagued by an overheating engine, however, and on lap 75 his powerplant seized up, forcing him to stop on the homestretch while running third.

• Defending USA Nationals champion Jimmy Mars of Menomonie, Wis., who roared from the eighth starting spot to the lead by lap 32 but couldn’t stay there. He suddenly headed pitside with mechanical trouble during a lap-59 caution period.

• Tim McCreadie of Watertown, N.Y., who won Thursday's feature. He started fifth and got up to second on a lap-23 restart before slipping back to fourth, where he was running when a flat right-rear tire caused him to pit during a lap-44 caution period. He was back up to fourth when an overheating powerplant forced him to the infield on lap 71.

• Defending WoO champion Josh Richards of Shinnston, W.Va., who suffered a rare DNF when an engine problem caused him to slow while running second on lap 18.

• Shane Clanton of Fayetteville, Ga., who climbed as high as second from the seventh starting spot before an overheating motor forced him out on lap 44.

• Rookie Austin Hubbard of Seaford, Del., who was running second on lap 60 in his first-ever start at Cedar Lake when his Beitler Motorsports car tossed a right-rear wheel and slammed into the wall between turns three and four.

Saturday’s action kicked off with a pair of 15-lap B-Mains won by Matt Miller of Waterville, Ohio, and Brian Birkhofer of Muscatine, Iowa. Tim Fuller of Watertown, N.Y., captured the 12-lap last-chance race.

WoO competitors will be idle until kicking off a five-race swing through the Northeast on Aug. 18 at Grandview Speedway in Bechtelsville, Pa.