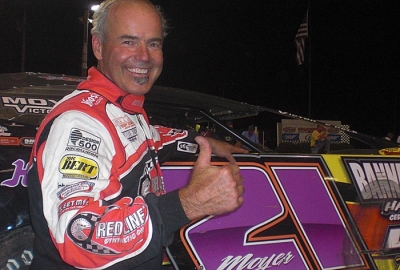 SHAWANO, Wis. (Aug. 4) — Billy Moyer was perfect in Wednesday night’s blockbuster World of Outlaws Late Model Series event at Shawano Speedway. Twenty-one years after falling short in the national tour’s only previous appearance at the half-mile fairgrounds oval, the three-time WoO champion from Batesville, Ark., capped a sweep of the evening’s action with a convincing victory in the 50-lapper in front of a capacity crowd. | Video | Slideshow

“To come out and set a track record (in time trials), win the heat and win the main — you can’t do no better than that,” said the 52-year-old Moyer, who dominated the first incarnation of the WoO (1988-89) run under late WoO sprint car series founder Ted Johnson but experienced a rare finish outside the top five in the tour’s stop on June 5, 1989, at Shawano. “That’s a storybook deal right there.”

Moyer, who started second in his Victory Circle car, outran polesitter Brady Smith of Solon Springs, Wis., to turn one at the initial green flag and never relinquished the lead. He raced unchallenged for the entire distance, beating Smith to the finish line by a margin of 4.991 seconds — nearly a full straightaway — in a race that was slowed by a single caution flag on lap 23.

Smith, 33, held off repeated challenges from fourth-starter Jimmy Mars of Menomonie, Wis., to secure the runner-up payoff in his Team Zero by Bloomquist mount. Mars settled for third place in his MB Customs machine, followed by defending WoO champion Josh Richards of Shinnston, W.Va., and Shane Clanton of Fayetteville, Ga., both in Rocket cars. Richards slipped by Clanton for fourth with an outside move off turn four on lap 41 but didn’t have enough time to catch Smith and Mars.

Moyer, who won a DIRTcar Summernationals event at Shawano in 2002, pushed his WoO all- time-best career win total to 37 with his runaway triumph. He has registered 15 of his victories since 2004, when the tour was restarted under the World Racing Group banner following a 15-year hiatus.

“It was a lot fun there tonight,” said Moyer, who earned $10,225 for his second win in nine WoO starts this season. “When the car’s working that good it’s always a lot more fun than when you gotta work your butt off to get to the end.

“There were little flaws (in the car) there at times — it can always be better — but it got the job done. I’m real happy with the car and (Clements) engine combination we have right now.”

With Moyer racing alone at the head of the pack, he had only a brief moment of trepidation while lapping WoO rookie Austin Hubbard of Seaford, Del., on lap 44. The two cars got close enough in turn one to make Moyer’s heart skip a beat.

“He changed his line just about the time I got behind him,” Moyer said of Hubbard. “It wasn’t a big deal. It seemed like my tires were a little bit better cold and the longer we ran we equaled out, so I didn’t want to waste any time there (lapping Hubbard) because I felt like the tires were fading. I forced the issue a little bit to get going.”

Moyer, whose other WoO victory in 2010 came in April’s Illini 100 at Farmer City (Ill.) Raceway, got himself some momentum to take into this weekend’s 23rd annual USA Nationals presented by U.S. Steel at Cedar Lake Speedway in New Richmond, Wis. He is a five-time winner of the $50,000-to-win event, which this year is part of the WoO tour for the first time since 2005.

Both Smith and Mars, 38, hailed Moyer’s performance. They spent the race in a personal battle for second place, not to mention the honor of their home state’s fans.

“We didn’t have nothing for Billy,” said Smith, who had never before raced at Shawano. “He was just better than we were. I couldn’t keep up with him.

“Jimmy and I raced our butts off for second and we’re just glad we held him off. I just tried to hold my line, be smooth and not make a mistake.”

Mars, who won the last WoO event held in Wisconsin on July 8 at Superior Speedway, thought he might have had a faster car than Smith but simply couldn’t find a way to sneak by his Badger State rival.

“I would’ve liked to have gotten into second and seen if we had anything for (Moyer),” said Mars. “But Brady did a good job. We had a couple shots there, but he did what he needed to do to hold me off.”

Smith’s second runner-up finish of the 2010 WoO left him one spot shy of a heartwarming victory. He was in search of a win for Reed Leupke of Bonduel, Wis., a 4-year-old Brady Smith fan who is battling leukemia. Leupke attended Wednesday’s race with his parents and picked the pole position in the pre-feature draw for Smith, who earlier this year gave Leupke a tour of his race shop.

Brian Birkhofer of Muscatine, Iowa, started and finished sixth after his mid-race attempts to overtake Richards were rebuffed. Tim McCreadie of Watertown, N.Y., made a solid charge from the 16th starting spot to place seventh after finding a unique line around the tricky track that allowed him to pick up four spots during the race’s second half. Darrell Lanigan of Union, Ky., saw his streak of nine consecutive top-three finishes snapped with a quiet eighth-place run, while Steve Francis of Ashland, Ky., and Tim Fuller of Watertown, N.Y., rounded out the top 10.

The race’s lone caution flag, on lap 23, was put out after Clint Smith of Senoia, Ga., slowed with oil-pressure problems in his new engine. He retired to the pit area, finishing 22nd.