Richards cruises at Eriez for his sixth WoO victory 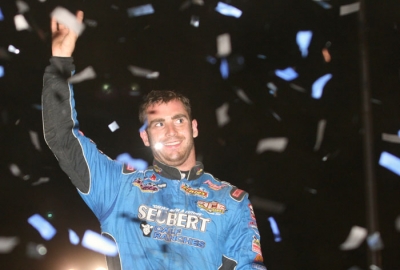 The national tour’s defending champion and current points leader authored one of the season’s most dominating performances, running away from the field after passing Gregg Satterlee of Rochester Mills, Pa., for the lead on lap 11. He had little trouble negotiating lapped traffic on his way to a winning margin of 8.039 seconds — roughly half a lap — over distant runner-up Ron Davies of Erie, Pa.

It was the series-leading sixth win of 2010 for Richards, who had been winless since capturing the first Firecracker 100 semifeature June 24 at Lernerville Speedway in Sarver, Pa. He pocketed $10,675 for his flawless effort in a race that ran caution-free – the second consecutive WoO event to go non-stop from start-to-finish.

“It was an awesome night,” said Richards, who registered his 26th career series victory. “We’ve had a fast car this whole trip but had some bad redraws (for starting spots), so tonight we finally started up front (the pole position) and really got to show what we had. The car was just phenomenal.”

Richards, 22, was outgunned for the top spot at the initial green flag by Satterlee, but once he worked his car into the lead he was never threatened. He lapped up to the 13th-place finisher and took the checkered flag just a few car lengths behind the back of a tight pack of cars that were all within striking distance of fourth place.

Davies, 52, might have been the only driver who appeared capable of making Richards sweat after he swept into second place on lap 20 and cut into the leader’s edge over the next six laps, but his struggles to dispose of lapped cars left him well behind the leader. He settled for a career-best WoO finish.

The red-hot Darrell Lanigan of Union, Ky., finished third after starting sixth, extending his unprecedented streak of consecutive top-three finishes to nine. He won three of the five Ohio-Pennsylvania events and ended the swing second in the WoO points standings, 28 points behind Richards.

Chris Hackett of Erie, Pa., a regular at the third-mile oval, recorded a career-best WoO finish of fourth after starting 11th and making a late-race surge into the top five, and 10th-starter Rick Eckert of York, Pa., placed fifth after Satterlee ceded the position on the final lap by sliding high off turn two and tumbling all the way to 12th in the final rundown.

Steve Francis of Ashland, Ky., finished sixth, missing out on a top-five finish by less a car length after being in the middle of a wild late-race scrum for fourth place and back. Tim McCreadie of Watertown, N.Y., who started eighth, cracked the top five on lap 45 but was shuffled back to seventh at the finish.

Notes: Richards drives the Rocket Chassis house car with a Cornett Racing Engine and sponsorship from Seubert Calf Ranches, Ernie D’s Enterprises, Ace Metal Works and Petroff Towing. ... Ron Davies earned his first career WoO fast-time honor with a lap of 15.586 seconds. ... Eriez standout Mike Knight of Ripley, N.Y., finished 10th, salvaging a night that began with him spinning into the infield during time trials due to a broken steering shaft. ... Among drivers failing to make the feature: Tyler Reddick, Dick Barton, Jill George, Darrell Bossard, Doug Eck, Andy Kania and Bump Hedman, the fourth fastest qualifer. ... WoO competitors have two days off before returning to action on Wednesday for a date at Shawano (Wis.) Speedway. The tour remains in the Badger State for the 23rd annual USA Nationals presented by U.S. Steel on Aug. 5-7 at Cedar Lake Speedway in New Richmond, Wis., a $50,000-to-win event sanctioned by the the series for the first time since 2005.