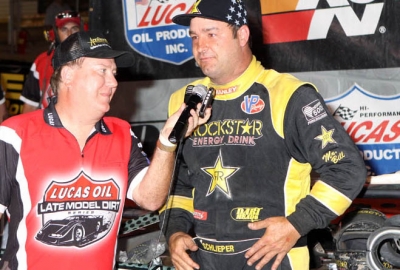 HAGERSTOWN, Md. (July 31) — Calling the track "a thorn in our side," Dan Schlieper of Sullivan, Wis., didn’t expect to end his two-year winless streak on the Lucas Oil Late Model Dirt Series at Hagerstown Speedway.

But the historic half-mile oval is exactly where the polesitting Schlieper ended his futility Saturday, taking the lead from outside front-row starter Don O’Neal of Martinsville, Ind., on the 16th lap and leading the rest of the 50-lapper for a $10,000 payday. Schlieper took the checkered flag more than two seconds ahead of O’Neal in becoming the sixth winning in six Lucas Oil visits to Hagerstown. | Video | Slideshow

“We’ve been behind the eight ball the whole time this year,” said Schlieper, who entered the event with four top-five series finishes. “We’ve had good runs here and there, but, I mean, it’s about time. We’ve had good cars, but just missed it here and there. My car just kept getting better and better, Right there towards the end, it was like a taxi cab just riding around.”

When the green flag waved, O’Neal pulled in front of Schlieper and Stone, with Stone taking the runner-up spot from Schlieper on the sixth lap and closing on O’Neal as he approached slower traffic by lap 11.

O’Neal had got past one car before the caution waved for Ronnie DeHaven Jr. who made contact with the second-turn fence on lap 14.

With clear track, O’Neal took off on the restart, but Schlieper used the outside of the double-file restart to zip past him and charge ahead on lap 16.

Schlieper then entered traffic on lap 30 and began stretching his lead a little with each lap while Stone stayed within striking distance of O’Neal with a comfortable distance back to Bloomquist.

A second caution on lap 41 for Brian Booze’s stopped racer set up the final laps as Schlieper again edged away from O’Neal until taking the checks.

“I really don’t care for this place too much,” said Schlieper, whose previous series victory came July 3, 2008, at Muskingum County (Ohio) Speedway. “I‘ve always ran bad here, but I’ll take it for what it’s worth.”