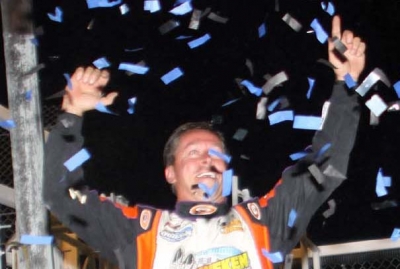 ATTICA, Ohio (July 30) — Rick Eckert went from rags to riches in the course of one memorable evening at Attica Raceway Park.

Eckert, 44, of York, Pa., overcame a host of obstacles to post his second WoO triumph of 2010, including a starting spot deep in the pack (18th); a massive mid-race crash that involved more than half the field; a hasty in-race radiator replacement; and, finally, two former series champions who stood between him and an improbable win.

The veteran driver’s stirring rally reached its zenith on lap 47 when he surged ahead of Shinnston, W.Va.’s Josh Richards to take the lead, clinching a $10,575 score that prompted Attica’s big crowd to give Eckert a standing ovation upon his arrival in victory lane.

“Bad luck, good luck — we experienced it all tonight,” said Eckert, whose 21st career WoO victory was his first since March 26 at Battleground Speedway in Highlands, Texas. “I was ready to go home after we blew the motor (moments after clicking off what would stand as the night’s fourth-fastest qualifying lap). I was about to call it off. I said, ‘We should just load up.’ But we decided to stick it out and now I’m sure glad we did.”

Eckert, one of only two drivers to start every WoO feature contested since 2004, fell one spot short of transferring to the headline event through a heat race before punching his ticket with a victory in the second consolation race. He made his presence known in the feature by moving up to eighth place by lap 23, but then his night took another unexpected turn.

After Eckert somehow escaped a lap-23 restart accident that sent Chub Frank of Bear Lake, Pa., into a barrel-roll and left more than a dozen cars scattered across the homestretch, his apparent change in fortune was quickly tempered by a broken radiator.

But the red-flag gave his team time to swap the radiator, and Eckert rallied back to sixth by a lap-35 caution for Russ King of Bristolville, Ohio, who was the race’s early story while leading laps 1-11. Two laps after the restart Eckert was third, and, after finally disposing of Lanigan to grab second on lap 42, he quickly ran down Richards.

Staying on the inside hub, Eckert slid ahead of Richards exiting turn two on lap 46 and officially assumed command for good as lap 47 was scored.

Early in the race, however, it appeared that the 21-year-old King had the car to beat. He powered around the track as the leader for the first 11 laps — and then his night went from bad to worse.

First, King spun in turn two on lap 11 to avoid the slowing Mike Knight of Ripley, N.Y. Though King remained in the lead for the ensuing restart because officials ruled that Knight was the reason for the caution, King’s steering was damaged and he ceded the top spot to Richards. He held on to second until sliding high in turn two on lap 22, and one lap later a scrape with Matt Miller of Waterville, Ohio, sent both drivers sliding off the backstretch and triggered another caution period.

King took the lap-23 restart at the rear of the field and was then marginally involved in the race’s biggest incident. Miller, who restarted third, made contact with Richards exiting turn four and ended up turned around in front of the field, setting off a tangle that saw Frank flip after overrunning Miller’s machine.

There were no injuries in the accident, but Frank and Miller joined Gregg Satterlee of Rochester Mills, Pa., who was fourth at the time, Brent Robinson of Smithfield, Va., and Devin Shiels of Britton, Mich., as casualties of the wreck.

Steve Francis of Ashland, Ky., finished sixth — a disappointing result because he was up to second and ready to pressure Richards for the lead on lap 32 when he slid over the track’s bank between turns three and four, causing him to fall to eighth before he recovered. Tim McCreadie of Watertown, N.Y., started third but was involved in the lap-23 accident and fell to seventh in the final rundown, ahead of rookie Austin Hubbard of Seaford, Del., who also got a piece of the crash.