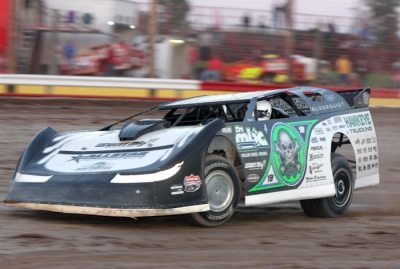 The polesitting Bloomquist was in command throughout the 50-lapper and withstood a one-lap shootout with runner-up Ray Cook of Brasstown, N.C., after the eighth and final caution on the 49th lap.

"The car was about as perfect as it gets," the 46-year-old Bloomquist said. "Last year, after the American Racer tires beat us, Hoosier went to work and had a great tire for us tonight. I wasn't really nervous on that last restart, because I knew Ray would run me clean. It would have been a shame to lose the race on the last lap after the night we had."

Cook, who started ninth and was trying to repeat his ’09 victory at Utica-Rome, settled for second with Dale McDowell of Rossville, Ga., rallying from his 18th starting spot to finish third. Outside front-row starter Earl Pearson Jr. of Jacksonville, Fla., and John Blankenship of Williamson, W.Va., rounded out the top five.

Owens lost a fuel line on the 10th lap while running second and the problems forced him out of the race with a 22nd-place finish.

Bloomquist lapped all but six competitors and built a nearly half-track advantage over Cook at the half-mile oval in the race’s late stages. Three cautions slowed the action in the final 10 laps but Bloomquist kept firm control on the top spot.

Notes: Bloomquist’s self-designed chassis has a Roush-Yates Engine ans sponsorship from Miller Bros. Construction and Hawkeye Trucking. ... Bloomquist has 492 career victories overall. ... Third-place finisher Dale McDowell started in the ninth row after battery problems in his heat race. ... Eric Wells was part of cautions on the first and fifth laps and was the first driver out in the 24-car field. ... Dale McDowell earned PBM-Erson Cams Hard Charger honors for his 18th-to-third run. ...Lucas Oil competitors return to action Saturday at Hagerstown (Md.) Speedway for a $10,000-to-win event.