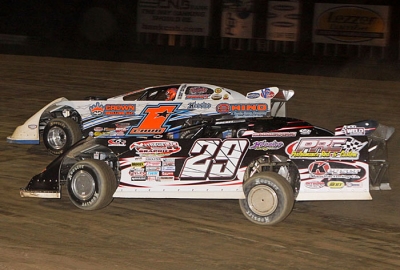 CLEARFIELD, Pa. (July 27) — Don’t call Darrell Lanigan the Bluegrass Bridesmaid any longer. Snapping his unprecedented streak of four consecutive runner-up finishes on the World of Outlaws Late Model Series, Lanigan kicked off the national tour’s Ohio-Pennsylvania Speedweek on Tuesday with a victory in the Fear The Bear 40 at Central Pennsylvania Speedway. | Slideshow | Video

Lanigan, 40, of Union, Ky., advanced from the third starting spot to take the lead from Chub Frank of Bear Lake, Pa., on lap six and never looked back. Racing in front of a standing-room-only crowd that turned out for the first-ever WoO event at Tim Bainey Sr.’s 3/8-mile oval, the 2008 tour champion survived four caution flags and an early threat from Shane Clanton of Fayetteville, Ga., to register his long-awaited second series win of 2010.

Clanton settled for second place in his RSD Enterprises Rocket car, a distant 2.308 seconds behind Lanigan’s GottaRace.com Rocket at the finish. Fifth-starter Steve Francis of Ashland, Ky., was several car lengths farther back in third at the checkered flag in his Valvoline Rocket, Rick Eckert of York, Pa., placed fourth after running as high as second in his Team Zero by Bloomquist mount and defending WoO champion and current points leader Josh Richards of Shinnston, W.Va., completed the top five with a steady-but-quiet run in his Seubert Calf Ranches Rocket.

“It feels great to get that second-place jinx off us,” said Lanigan, who finished second in all four races contested during the recent Wild West Tour. “Our car’s been good, but we just needed a little luck. Maybe things changed a little bit for the better tonight.”

Lanigan earned $8,600 for his 14th career WoO victory and first since March 19 at Ocala (Fla.) Speedway. He scored nine runner-up finishes between his two wins this season, including six in the 10 races prior to Tuesday’s stop.

Now a winner of two race in each WoO campaign since 2004, Lanigan felt very comfortable circling Central Pennsylvania Speedway for the first time in his career.

“This track kind of fit our program pretty good — big track with sweeping, wide corners,” Lanigan said of the track which operated with a paved surface for 20 years until being covered by dirt prior to the 2006 season. “The setup we’ve been running lately works good on a place like this. I could just run through the middle without a problem.”

Lanigan was only briefly challenged by Clanton, who needed just six laps to hustle from the ninth starting spot to second. He vaulted from fifth to second in a single lap following a lap-six restart and nearly ran into the rear bumper of Lanigan’s car when he charged hard off the outside of turn four on lap 13, but that was as close as he got to the lead.

Clanton, 34, lost second to Eckert on a lap-15 restart. He regained the position on lap 21 and stayed there to the finish, but he couldn’t summon the speed to compete with Lanigan.

“He went a little harder on right-rear tire than I did,” Clanton said of Lanigan. “I knew where we were starting we had to go at the beginning. I thought I could get (past Lanigan) and then just ride, but I didn’t – and then at the end I just had to ride behind him.”

Lanigan’s victory moved him within 36 points of Richards in the WoO points standings after 29 of a scheduled 47 events. Tim McCreadie of Watertown, N.Y., was left 26 points behind Richards in second after settling for a ninth-place finish.

There were no serious incidents during the race. Cautions were caused by Todd Snook of Mifflin, Pa., who slid off the track on lap six; D.J. Myers of Greencastle, Pa., who stopped in turn two on lap 15; and Gregg Satterlee of Rochester Mills, Pa., who lost a wheel on laps 20 and 34.

The WoO Ohio-Pennsylvania Speedweek continues on Wednesday at Sharon Speedway in Hartford, Ohio. After an off-day on Thursday, the swing visits Attica (Ohio) Raceway Park on Friday; Muskingum County Speedway in Zanesville, Ohio, on Saturday; and Eriez Speedway in Hammett, Pa., on Sunday.