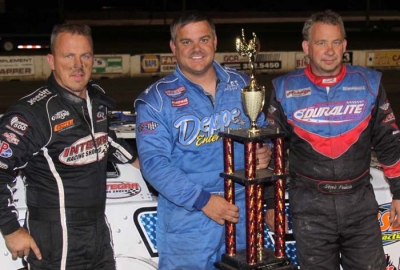 Mars, 38, of Menomonie, Wis., was about to receive a challenge for the lead from Brady Smith and Darrell Lanigan when the yellow lights blinked on with three laps remaining, setting Mars free from lapped traffic and propelling him to victory in the World of Outlaws Late Model Series event at Dakota State Fair Speedway. | Slideshow

The $10,000 triumph was Mars’s second on the four-race Wild West Tour, which concluded with Saturday night’s rain-threatened program at DSFS. He also won on Thursday night in a dominant performance at his home state’s Superior Speedway.

“You have your peaks and valleys with this deal,” said Mars, who pushed his career WoO win total to three. “The beginning of the season was absolutely terrible for us, but we’ve worked hard and got our deal back in synch. We’re just kind of on top of the peak right now and we’re gonna enjoy it.”

Mars, who started second, drove his Deppe Enterprises MB Customs car by polesitter Steve Francis of Ashland, Ky., for the lead on lap two and was never headed. He led by as much as a full straightaway until being run down in the closing laps by Solon Springs, Wis.’s Smith and Union, Ky.’s Lanigan.

Smith and Lanigan were directly behind Mars and ready to bid for the lead when Jill George of Cedar Falls, Iowa, stopped between turns one and two on lap 47, causing the only break in the fast-paced race’s action. Mars then easily glided away from the pack on the ensuing restart to reach the checkered flag first.

Lanigan, 40, overtook Smith for second on the restart but couldn’t catch Mars, leaving the 2008 WoO champion with his fourth consecutive runner-up finish on the ‘Wild West Tour.’ He charged forward from the 11th starting spot to continue his profitable-but-frustrating run of second-best outings with his GottaRace.com Rocket car.

Mars said he didn’t know that Smith and Lanigan had run him down, but he felt he had some speed in reserve to turn them back. He proved that point when he ran away on the restart.

“I wasn’t pushing it as hard as I needed to,” Mars said of his late-race pace. “When you’re leading and trying to pass lapped cars, you can be kind of the sitting duck. I thought if I slowed down for that lapped car (on lap 47) it was gonna be tough for anybody to get a run on the outside, but I guess those guys got pretty close to me.

“I had a lot left in the car. When I was on open track I could really haul the mail, but if I would’ve heard them I could’ve stepped the wick up.

“The caution definitely helped us,” he added, “but we’ll take the win however we can get it. Whether I take it by an inch or a half a lap, it’s a win.”

Lanigan, meanwhile, was surprisingly upbeat after falling one position short of victory for the fourth night in a row. He was the first driver to make the four-tenths-mile track’s outside groove work, running high through the corners to march from eighth place to second in a 10-lap span from laps 25-35. Smith mirrored Lanigan’s moves and actually slipped by him for second on lap 46, but Lanigan regained the position on the final restart.

“For where we started we did pretty good to get where we did,” said Lanigan, who has one win this season. “I didn’t need that caution there at the end. They (Mars and Smith) had kinda got bunched up (behind the lapped cars) and I thought maybe I had something on the outside.

“Our car’s been good enough to win, but we’re falling short.”

Smith, 33, stood dejectedly in the pit area after seeing his hopes for a slump-busting victory evaporate with the late caution flag. He went from being in position to bid for the lead to losing traction off turn two on the restart and falling to fourth.

“I had just gotten to (Mars) the lap the caution came out,” said Smith, who last month dropped off the WoO as a regular to regroup his self-owned team. “I was going to make my move the next lap, but I never got the chance.

“We were done after the caution. I used my stuff up really bad to get where I was, so my tires were totally bald. I just couldn’t grip the track anymore.”

Brian Birkhofer of Muscatine, Iowa, finished sixth after starting fourth and running in the top five for much of the distance. McCreadie’s attempt to pick up positions with an outside charge on the final restart caused him to fall to seventh at the finish. Shane Clanton of Fayetteville, Ga., finished eighth after running as high as fourth, defending WoO champion Josh Richards of Shinnston, W.Va., placed a quiet ninth and fifth-starter Rick Eckert of York, Pa., faded to 10th.

Richards ended the Wild West Tour leading the WoO points standings by 18 points over McCreadie and 46 over Lanigan.