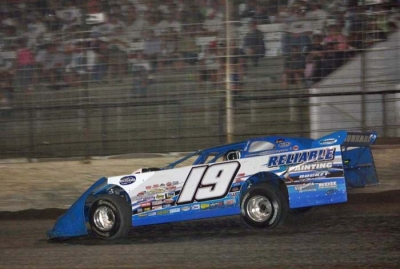 The 18-year-old rookie sensation didn’t perform his trademark Ricky Bobby celebratory run in front of the crowd, however, because the race was checkered with the field of cars sitting in the pit area and a victory lane ceremony was not conducted due to the wet conditions. He had to be content receiving a trophy for the second WoO victory of his young career while dressed in street clothes near his Beitler Motorsports team’s hauler.

“I like to celebrate with all the fans out on the homestretch, but I couldn’t do that tonight,” said Hubbard, who stripped down to his fireproof long underwear after winning his first race March 20 at Screven Motor Speedway in Sylvania, Ga. “Maybe we can come back and show ‘em some skin next year.”

Hubbard, who started from the pole position in Dale Beitler’s Reliable Painting Rocket car, had led from the initial green flag when intensifying rain slickened the quarter-mile oval’s surface enough to prevent the race from restarting on lap 21. The field was sent to the pit area to wait out the weather, but nearly an hour of steady rain left the track too soaked for officials to dry it in time to beat the impending curfew.

While WoO rules stipulate that a race must reach the halfway point to be considered an official race, tour director Tim Christman made the decision to declare the event complete at 21 laps because the series can’t return to the North Dakota facility this season due to travel logistics. He also announced that the race would offer only 60 showup points to all drivers regardless of their finish.

In a related agreement reached between WoO and River Cities officials, all drivers who competed in the shortened event were paid 75 percent of the regular posted purse for each finishing position.

Hubbard was chased throughout the race’s 21 laps by 2008 WoO champion Darrell Lanigan of Union, Ky., who started from the outside pole. Lanigan, 40, had yet to offer Hubbard a serious challenge when the event reached its early end, leaving him with a runner-up finish for the third time in as many ‘Wild West Tour’ starts.

Defending Josh Richards of Shinnston, W.Va., was the biggest mover in the event, advancing from the 10th starting spot to finish third. He passed Tim McCreadie of Watertown, N.Y., for third on a lap-14 restart and was threatening Lanigan when the race was slowed for the final time on lap 21 for the spinning car driven by Jill George of Cedar Falls, Iowa, who also spun on lap 14 to bring out a caution flag.

McCreadie settled for a fourth-place finish after starting third and Jimmy Mars of Menomonie, Wis., who won the previous night at Superior (Wis.) Speedway, gained one position to finish fifth.

Hubbard happily accepted the abbreviated victory, relating that he felt confident that he would have been able to stay at the front of the pack for the full 50 laps.

“I think if that rain never came we could’ve held ‘em off,” said Hubbard, who earned $8,250 for his night’s work. “The car was great all night. We had a good qualifying run (eighth-fastest time), the last-lap pass (of Mars) to win the heat helped set us up to pull the number one pill (for the A-Mains), and we were real fast in the feature. The car was a little tight in (the corners), but as soon as I could get the right-rear hooked on the (outside) lip it would just go right around there.

“It’s always nice to get the whole 50 in, but I’ll take it either way. There’s nothing like winning, and winning two races in our rookie season — being the first rookie to win two races — is more than I could ask for.”

The feature was marred by a wild crash on lap 12 involving Brian Birkhofer of Muscatine, Iowa, whose car slipped over the turn-two berm and rolled once as he battle for fifth place. His machine landed on its wheels and he quickly climbed out uninjured.

The Wild West Tour concludes Saturday with the Great Plains 50 at Dakota State Fair Speedway in Huron, S.D. A $10,000 top prize will be on the line in the third series event held at the 4/10-mile oval promoted by Orville Chenoweth.