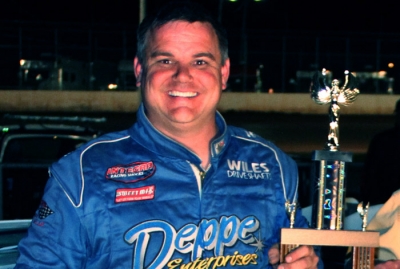 SUPERIOR, Wis. (July 8) — Jimmy Mars left no doubt on Thursday night that he has Superior Speedway figured out. Continuing his recent mastery of special events at the 3/8-mile oval in his home state, Mars rocketed from the fourth starting spot to the lead on the opening lap and never looked back en route to a convincing World of Outlaws Late Model Series victory in the Mid-States Hydraulics 50.

Mars, 38, of Menomonie, Wis., earned $10,100 for his second career win on the WoO, which stopped at Superior for the first time and attracted a standing-room-only crowd to the fairgrounds track. His previous triumph on the national tour came in the 2009 Firecracker 100 at Lernerville Speedway in Sarver, Pa.

After winning at least one World Dirt Racing League series event at Superior in each of the last four years, Mars surprised no one with a performance that saw him steer his Deppe Enterprises MB Customs car around the red-clay surface virtually unchallenged from start-to-finish.

"Experience here doesn't hurt by any means," said Mars, who lives just under 150 miles south of the track. "These (WoO) guys travel all over the country and are so good, I thought, 'If I can have any advantage on them at all at a track, this might be one where I did.’

"We kind of had an idea of what to do. I said, 'Let's just go back and get on the hard tires and get back to what we've done here in the past.' Basically our setup for the feature was identical to what we've had success with here.”

Mars put his Superior Speedway knowledge to work with his tire choice, picking harder compound Hoosier rubber that propelled him to a runaway win. He spent most of the distance with a commanding straightaway edge over polesitter Darrell Lanigan of Union, Ky., who kept his Rocket car solidly in second place the race and finished 2.793 seconds behind Mars.

Defending WoO champion Josh Richards of Shinnston, W.Va., who started from the outside pole, padded his tour points lead with a quiet third-place finish in his father Mark's Rocket house car. Fifth-starter Brady Smith of Solon Springs, Wis. — a former regular at Superior who lives about 30 miles from the facility — finished fourth in his Team Zero by Bloomquist mount after outdueling Brian Birkhofer of Muscatine, Iowa, who settled for fifth in his MB Customs machine after starting seventh.

Tim McCreadie of Watertown, N.Y., finished sixth, salvaging a decent run on a night that he struggled with his setup. He lost only six points to Richards, sending him to the next Wild West Tour event with a manageable 22-point deficit in the standings.

Mars didn't exactly snooker his competition, but he did use his outsider status as a reason to roll the dice a bit with his tire-compound selection.

"Before the race Darrell and I were just joking about my tire choice. I said, 'Hey, if we suck, the beer's still cold after the race.' The hard tires worked, though, so I guess we get to drink in celebration tonight instead of in sorrow.”

Mars knew he had made the right decision even before taking the initial green flag.

ï¿½fired up (the car) before the start and it felt real good on the straightaway traction,” Mars said. "They threw the green and I was like, 'We got a pretty good piece here,' but then we ran down into turn one and I said, 'Whoa.' The right-rear wasn't quite hot enough yet, so I slid up up the track a little bit. Then it instantly got warmed up and I was able to run down into three and four and pass Darrell there for the lead.”

That opening-lap move by Mars was, for all intents and purposes, the story of the race. No driver understood that more than the 40-year-old Lanigan, who used a more conservative "medium" tire-compound combination and simply couldn't keep pace with Mars.

"I knew he had on harder tires than us, so when he took off like that (at the start) I said, 'Oh man, this is gonna get ugly,'" said Lanigan, who registered his second runner-up finish in as many nights after falling short of victory by a nose to McCreadie in Wednesday night's Gopher 50 at Deer Creek Speedway in Spring Valley, Minn. "If he was that good at the start, I knew it was gonna be tough to beat him. All we could do was run second again.”

Finishing in positions 7-10 were Chub Frank of Bear Lake, Pa., who lost sixth to McCreadie on lap 24; Shane Clanton of Fayetteville, Ga., who climbed forward from the 17th starting spot; Pat Doar of New Richmond, Wis., who earned a $500 bonus as the highest-finishing driver who hasn't won a WoO event and isn't ranked among the top 12 in the tour points standings; and Rick Eckert of York, Pa., who rallied after drawing a caution flag on lap 16 and pitting to bolt two harder tires on his car.

In a race slowed by just two caution flags on lap 16, the most significant incident was the second yellow that circuit. Steve Francis of Ashland, Ky., went spinning in turn four while battling for sixth with rookie Austin Hubbard of Seaford, Del.; while he twirled 360 degrees and continued without stopping, a caution was displayed and Francis pitted moments later to change a flat left-rear tire.

WoO regular Tim Fuller of Watertown, N.Y., once again used a provisional starting spot to gain entry to the main event as he continues recovering from the emergency appendectomy he underwent on Monday afternoon. But this time he felt strong enough to at least attempt to race, running 15 laps before deciding to pull in.