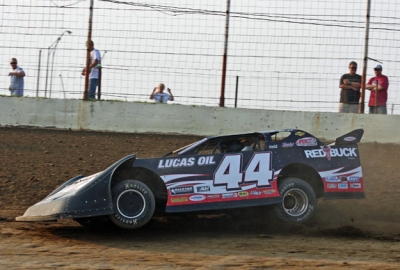 “We started up there with Eddie Carrier Jr. and I knew when they watered the top of the track he was going to be tough, but we had a real good race for the lead there early on,” said the 38-year-old driver from Jacksonville, Fla., who notched his fifth series victory of the season and 22nd of his career. “I saw (Bloomquist) up there on the scoreboard and Ray Cook there in third, so I knew I was in a for a tough race there, but the cautions helped us a few times when it cleared some lapped traffic that was in front of us. The car restarted well and we were able to hold them guys off.”

Bloomquist and Cook were followed across the finish line by West Virginia drivers Steve Shaver of Vienna and John Blankenship of Williamson. Carrier got shuffled out of contention on a restart and dropped out in the final laps.

Pearson and Carrier battled side-by-side the first few laps with Pearson forging ahead on the third lap, then pulling away from Carrier and Bloomquist. Pearson’s lead shrank amid traffic, then a lap-15 caution for Steve Casebolt bunched the field and gave Pearson clear racetrack.

With traffic developing in front of Pearson, his pursuers pulled within a few lengths before the third caution appeared on lap 42 for defending track champion Kenny Christy. Pearson edged away on that restart, then again on a lap-46 restart following Donnie Moran’s spin to complete his victory.