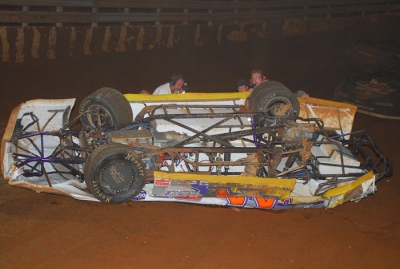 The 34-year-old who now calls Fayetteville, Ga., home took full advantage of the opportunity presented to him on Saturday night, continuing his early-summer hot streak with a decisive victory in the World of Outlaws Late Model Series Coca-Cola 50 at Tazewell Speedway. | Video | Slideshow

Clanton, who also started from the pole Friday at Wartburg (Tenn.) Speedway but settled for a runner-up finish, led the entire distance Saturday before a near-capacity crowd that turned out for the national tour’s first-ever visit to the high-banked,third-mile oval. He repelled several challenges from Steve Francis of Ashland, Ky., and barely escaped two incidents en route to his third WoO triumph of 2010 and the 14th of his career.

“I let two races go this year (failed to win after starting from the pole) so I wasn’t gonna lose another one,” said Clanton, who earned $10,500. “After Michelle (Davies, his girlfriend and designated position drawer) picked me the pole, I told her, ‘If you do your job, I’ll do mine.’ ”

Clanton mastered the wicked-fast bullring, keeping his Malcuit-powered RSD Enterprises Rocket car out front in a rough-and-tumble event that was slowed by seven caution flags and one red and lasted just over 47 minutes. He crossed the finish line 1.053 seconds ahead of Francis, who started fourth but chased Clanton from the second spot for the final 35 laps in his Valvoline Rocket machine.

Defending WoO champion Josh Richards of Shinnston, W.Va., calmly moved forward from the sixth starting spot to finish third despite running the last 15 circuits on seven cylinders because an engine lifter apparently broke in his father Mark’s Seubert Calf Ranches Rocket. He doubled his tour points lead to 36 markers over Tim McCreadie of Watertown, N.Y., who finished 12th after pitting on lap 20 to change a flat left-rear tire.

“I knew we had a good car, but we made some more changes right before the feature and it made it a lot better,” said Clanton, whose victory gave him two wins (including a $30,000-plus score on June 26 in the Firecracker 100 at Pennsylvania’s Lernerville Speedway) and two runner-up finishes in his last five WoO starts. “We tightened the car up and it made a world of difference.”

Clanton was fast enough to hold off Francis, who ran within striking distance but couldn’t pull off a pass.

“I thought I heard him under me a couple times,” Clanton said of Francis, “but the bottom of (turns) one and two got so rough I said, ‘If he passes me down there, he’s gonna have to make a perfect line.’ I thought I was gonna break something in the race car if I ran down there, so I just married myself to the top and said, ‘If he beats me, he beats me.’”

“I think I was more maneuverable, but he could run a faster lane in the open every lap,” Francis said of Clanton. “There wasn’t enough off of (turn) four to really pass. He was gonna have to make a mistake for me to get by him.

“We ran first and second, though, so I’m happy. Me and Shane have been working on a lot of stuff together, so it was a good race for both of us.”

Clanton experienced a couple very anxious moments, however, while pacing the field. The first came on lap 15 when Rick Rogers of Knoxville, Tenn., came off the turn-four wall and rolled his car in front of Clanton and several of his pursuers; later, on lap 48, Mike Collins of Carter Lake, Iowa, spun directly ahead of Clanton.

“As that guy was flipping he came right over my nose,” Clanton said. “It scraped the nose of my car all the way up to the air filter. I was lucky it didn’t knock the carburetor off.

“When I got to him I just gassed it up – I said, ‘I’m not stopping here.’ I guess I got him up in the air and he landed (then second-running Vic Hill of Morristown, Tenn.) behind me.

“Then with Collins — his eyes looked about the size of quarters when I seen him spinning in front of me,” Clanton added. “I thought I was gonna T-bone him, but he gassed it up and got out of the way just in time. The green stayed out and we made it to the finish.”

Rogers’s series of flips provided the most spectacular accident of the event. His car landed upside down after it slammed into the right side of the machine driven by Brent Robinson of Smithfield, Va., and also collected Hill, whose strong run came to an abrupt end due to damage his car sustained in the altercation.

Rogers, who started third but was relegated to the rear of the field after spinning out of fourth place on lap 10, escaped the crash without injury.

Finishing in positions 6-10 was Rick Eckert of York, Pa.; Austin Hubbard of Seaford, Del., who started 13th; 11th-starter Darrell Lanigan of Union, Ky.; Clint Smith of Senoia, Ga., who rallied from a pit stop on lap two to change a flat right-rear tire; and Eric Jacobsen of Sea Cliff Beach, Calif., who spun wildly in turn three late in the distance but continued without causing a caution flag.

Tim Fuller of Watertown, N.Y., had a rough night, finishing 15th after retiring on lap 33 with right-front suspension woes. His hopes were dashed after he crushed the right-front nose of his car and slowed to bring out a caution flag on lap five.