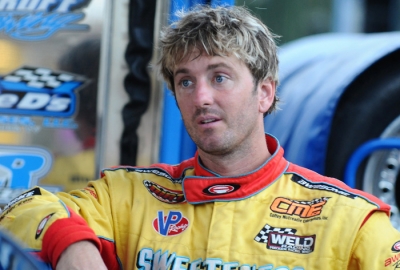 WARTBURG, Tenn. (July 2) — Tim McCreadie scrawled his name all over Friday night’s first-ever World of Outlaws Late Model Series event at Wartburg Speedway. But while the 2006 WoO champion led every lap of the Invasion 50 presented by All-State Trailers of Knoxville, Tenn., his third victory of 2010 on the national tour didn’t come without one especially anxious moment. | Video | Slideshow

McCreadie, 36, of Watertown, N.Y., slid out of the preferred inside groove when he bumped a slower car between turns three and four on lap 41. The run-in nearly cost him the lead, but he regained control before Shane Clanton of Locust Grove, Ga., could sneak by and held on for the remainder of the distance in front of a huge crowd promoter Scott Green called the biggest in track history.

“Things got a little hairy in lapped traffic because you don’t know where anybody is behind you,” said McCreadie, who started second in his Sweeteners Plus Rocket car and outgunned the polesitting Clanton to assume command at the race’s initial green flag. “I kind of forced the issue to get by that lapped car (driven by Charles Hurst of Knoxville, Tenn.) after following him for a couple laps, but I’m not any good at moving people out of the way so I almost took myself out.

“I started sliding up the track with (Hurst) and I was like, ‘Man, I just got out of the rubber (lane) and somebody’s gonna drive by me.’ We were lucky to get back down in time to hold on.”

The 34-year-old Clanton drew within a car length of McCreadie when the leader lost momentum, but that’s as close as he got to the top spot. Clanton futilely chased McCreadie through the final laps and settled for a runner-up finish in his RSD Enterprises Rocket car, 0.418 of a second behind McCreadie at the checkered flag.

“When (McCreadie) hit that car, got sideways and pushed up the racetrack, he left the door open for me,” said Clanton, whose second-place outing came six days after he pocketed over $30,000 for winning the Firecracker 100 at Lernerville Speedway in Sarver, Pa. “But I just wasn’t close enough to take advantage. I don’t think I had enough gear in (the car) for the race.”

Sixth-starter Billy Ogle Jr. of Harriman, Tenn., finished third — a career-best WoO performance for the 46-year-old veteran who is a former track champion at the quarter-mile track. He earned $500 for being the highest-finishing driver who hadn’t won a WoO feature and wasn’t ranked among the top 12 in series standings.

Clint Smith of Senoia, Ga., started and finished fourth in his Rocket mount — recording just his second top-five run of 2010 — and Chub Frank of Bear Lake, Pa., who started third, placed fifth in his Rocket machine for his third top-five performance of the season.

Defending WoO champion and current points leader Josh Richards of Shinnston, W.Va., finished a quiet-but-steady sixth, leaving him with an 18-point lead in the standings over McCreadie.

Just over one month ago McCreadie was third in the standings and trailed Richards by 70 points, but he’s slowly-but-surely crept back into the thick of the battle for the $100,000 series championship. He’s won two of the last three tour A-Mains to join five-time winner Richards as the only other driver with at least three victories this season.

“I think we’ve hit on a few things we found back at the shop,” said McCreadie, who earned $10,775 for his 15th career win on the WoO. “I told the (crew) guys after Lernerville last week that we had a car capable of running up front on a regular basis and tonight we proved it.”

Three caution flags slowed the action, all for minor tangles midway through the event. The first incident, between turns one and two on lap 23, involved Tommy Kerr of Maryville, Tenn., Stacy Boles of Clint, Tenn., and Mark Vineyard of Powell, Tenn., and nearly swept up McCreadie, Clanton and Smith.

Darrell Lanigan of Union, Ky., pitted during the lap-23 caution period to change a flat right-rear tire, hurting his WoO title aspirations. He managed only a 14th-place finish, leaving him third in the points standings, 68 points behind Richards.

The much-anticipated WoO stop at Wartburg was a nightmare for the track’s top weekly Late Model competitor, Anthony White of Clinton, Tenn. A winner six times in eight starts this season at Wartburg, the 38-year-old racer never turned an official lap in racing competition on Friday.

White was scheduled to start fourth in the third heat but was black-flagged before the race began because he spent several pace laps refusing to fall to the rear of the field as a penalty for reporting late to the staging area. Later, an opening-lap tangle in the second consolation race left his car with night-ending damage.

The WoO completes its Volunteer State doubleheader on Saturday at Tazewell Speedway. A $10,000 top prize will be on the line in the Coca-Cola 50.