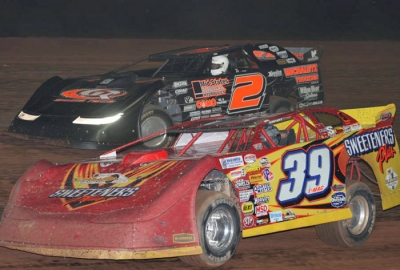 SARVER, Pa. (June 25) — Tim McCreadie rediscovered the path to victory Friday on the World of Outlaws Late Model Series at Lernerville Speedway. And after capturing the second 30-lap preliminary of the fourth annual Firecracker 100 presented by GottaRace.com weekend, the 2006 WoO champion was smiling and allowing himself to dream of an even bigger triumph in Saturday night’s extra-distance, $30,000-to-win spectacular. | Video | Slideshow

“We’ve struggled a little bit and been off, so we went back to the shop, changed some things and got back to where we were a year ago,” said McCreadie, who earned $6,275 for his second win of the 2010 WoO and guaranteed himself a pole starting spot in a Firecracker 100 heat on Saturday evening. “I know we didn’t show it last night with our finish (seventh in the weekend’s first 30-lap preliminary), but we came on a bunch late. Tonight we just started further up and were able to get to the lead quick enough.

“We’ve had two good nights in a row. Hopefully in a lot longer race (Saturday) night we can just pace ourselves, get our car balanced and be up there at the end.”

McCreadie, 36, of Watertown, N.Y., started fourth but hustled his Sweeteners Plus Rocket car into second place on a lap-two restart. He then stalked leader Brady Smith of Solon Springs, Wis., until diving to the inside of turn four to assume command for good on lap 21.

In another fast-paced event slowed by only a single caution on lap two for a spin by Union, Ky.’s Darrell Lanigan, McCreadie crossed the finish line 1.386 seconds ahead of Shinnston, W.Va.’s Josh Richards, who slipped his Rocket Chassis house car by Smith for second with the white flag flying. The 22-year-old Richards, who started fifth, fell short of duplicating his victory in Thursday’s semifeature.

“We came on at the end but Timmy was really good,” said Richards, who leads the WoO with five victories this season. “We pretty much did the same thing we did last night, but the car was just a little bit too tight.”

Smith, 33, settled for third place in his Team Zero by Bloomquist machine after racing off the outside pole to lead laps 1-20. Sixth-starter Billy Moyer of Batesville, Ark., finished a steady fourth for the second consecutive night in his Victory Circle car and seventh-starter Dale McDowell of Rossville, Ga., who didn’t qualify for Thursday’s race, completed the top five in NASCAR star Clint Bowyer’s Warrior car.

McCreadie’s discovery of the extreme lane was the key to his victory over Smith, who spent virtually the entire distance tossing his mount around the 4/10-mile oval’s outer lip.

“I thought my best shot was to get low (on the track) because I knew I wasn’t gonna pass him above the cushion,” said McCreadie, who recorded his 14th career win on the WoO. “There was a bunch of moisture down there, so I figured I’d take a shot at it. We got lucky tonight. Our stuff steered pretty good down there.”

Smith had no answer for McCreadie’s challenge. He was left to battle for second with Richards.

“I saw Tim down there, but I thought I’d keep doing what I was doing,” said Smith, who recently made the difficult decision to no longer follow the WoO as a regular for reasons that include financial concerns. “I just lost all my drive (off the corners). I checked my right-rear tire afterward and there was only four pounds of air in it so that didn’t help my any, but even if my tire didn’t start going flat I don’t know if I would’ve had anything for Tim.”

The mop-haired McCreadie was bubbling with enthusiasm following his triumph, which was punctuated by a ear-splitting fireworks display during the Victory Lane ceremonies. He gave the slick Lernerville racing surface rave reviews, making him look forward to Saturday’s Firecracker 100 finale.

“I like the way (the track) is,” said McCreadie, whose previous WoO win at Lernerville came during his 2006 championship season. “It’s really neat. It takes a little more than just being really smooth — sometimes you gotta cock it and run hard. It’s a pretty challenging track.”

McCreadie moved to second in the WoO points standings, overtaking Lanigan, who could only manage a 13th-place finish after qualifying through a consolation race and being forced to the rear of the A-Main field after his lap-two spin. McCreadie trails Richards by 30 points — and that’s what his deficit will remain after Saturday night because the Firecracker 100 offers only show-up points to all competitors.

The night’s heat-race action was highlighted by a wild tangle during the second qualifier involving Bloomquist and defending Firecracker 100 champion Jimmy Mars of Menomonie, Wis., who came together and slid off the track in turn one while battling for second place. Bloomquist restarted at the rear of the field and finished fourth, while Mars retired with suspension damage and was later unable to climb high enough to transfer to the feature through a consolation.

The Firecracker 100 presented by GottaRace.com concludes on Saturday (June 26) with a full day of activities. The program includes heat races, consolation races, the $3,000-to-win Uncle Sam 30 for non-qualifiers and the Firecracker 100.