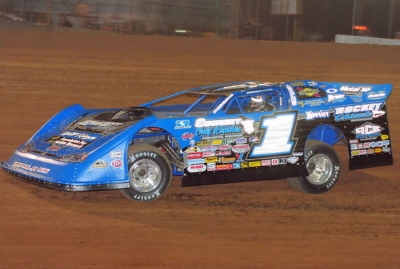 Richards, 22, of Shinnston, W.Va., raced from outside the front row to outgun fellow former WoO titlist Billy Moyer of Batesville, Ark., at the initial green flag. He went on to turn back a late challenge from Shane Clanton of Locust Grove, Ga., in a caution-free event that was completed in under 10 minutes.

“That’s definitely the slickest track I’ve ever won on,” said Richards, who earned $6,000 for his 25th career WoO victory. “It was definitely the slowest I’ve ever gone to win, but (the track is) really fun when it’s like that. I really had no idea where to go or where to be, but it worked out.”

The triumph guaranteed Richards a pole position starting slot in one of the qualifying heat races for the Firecracker 100 on Saturday, regardless of his finish in Friday’s second 30-lap preliminary feature. He will bid for his first-ever 100-lap Dirt Late Model victory in Saturday’s $30,000-to-win blockbuster.

Clanton, 34, settled for second place in his RSD Enterprises Rocket car, 0.428 of a second behind Richards’s Seubert Calf Ranches Rocket at the checkered flag. The WoO regular started fourth but didn’t reach the runner-up spot until slipping underneath Moyer on lap 24.

Inaugural Firecracker 100 winner Scott Bloomquist of Mooresburg, Tenn., who started seventh, came on strong during the race’s final circuits to place third in his self-designed machine. Moyer faded to fourth at the finish in his Victory Circle Chassis and third-starter Steve Shaver of Vienna, W.Va., placed fifth in the K&L Rumley Rocket.

Richards, who opened last year’s Firecracker 100 weekend by winning a postponed 50-lap WoO event, felt the late-race pressure that Clanton applied. But the young sensation didn’t falter, allowing him to extend his tour points lead to 30 markers over Darrell Lanigan of Union, Ky. (finished eighth) and 34 over Tim McCreadie of Watertown, N.Y. (seventh).

“I saw Clanton down off the bottom of (turn) four,” said Richards, who made his first career WoO start at Lernerville in 2004. “I’d push all the way to the cushion and look left, and he’d be there. I just kinda had the momentum off the top (to stay ahead).”

Thursday night’s preliminary action left Richards with a good feeling about his chances in the Firecracker 100, which he believes has the makings of a thrilling extra-distance affair.

“I think the UMP (Hoosier LM) tire rule is gonna make it a really good race,” Richards said. “The tires aren’t really the right tires for the track, which made everybody just kind of slip and skate around (tonight). This was a preview of what you’re gonna see the rest of the weekend.”

Clanton, who has been a contender for victory in two of the three previous Firecracker 100s, stamped himself as a driver to watch once again with his Thursday-night performance. He just wished that he hadn’t missed the white flag being thrown.

“I had a pretty good car,” he added. “Our cars were about equal, but I must have been pretty good if I was a little bit harder on tire (than Richards).”

Bloomquist, meanwhile, was on the charge at the finish in his first WoO start of 2010. He broke into fourth place on lap 17 by splitting Shaver and Mars off turn two, then ran down Moyer to grab third on lap 25.

“I needed 10 more laps, maybe five,” said Bloomquist, who raced with a red, swollen left eye after apparently getting something in it earlier in the day. “My car was good. I could run anywhere — and I was running those guys (the leaders) down at the end.”

Mars, the defending Firecracker 100 champ, started and finished sixth. The 10th-starting McCreadie placed seventh after falling as far back as 15th and Lanigan advanced from the 16th starting spot to secure an eighth-place finish. Doug Drown of Wooster, Ohio, was ninth to earn a $500 bonus for being the highest-finishing driver who hasn’t won on the tour and isn’t ranked among the top 12 in points.

The Firecracker 100 weekend continues Friday with another WoO program topped by a 30-lapper paying $6,000 to the winner. Drivers will use their best finish from the Thursday and Friday competition to align themselves in Saturday night’s Firecracker 100 heat races.