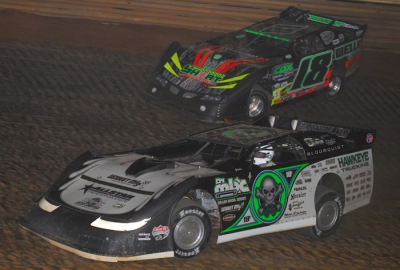 Bloomquist earned $10,000 for leading the final 19 laps after race-long leader Dale McDowell broke a lift bar and fell out of the race, the second of a doubleheader series weekend at Volunteer. | Slideshow | Video

Chris Madden of Gray Court, S.C., finished second in the 50-lapper followed by Jonathan Davenport of Blairsville, Ga., Ray Cook of Brasstown, N.C., and Eric Wells of Hazard, Ky. Jimmy Owens of Newport, Tenn., who won Friday’s weekend opener, ended up 14th in the finale after taking a provisional starting spot; Owens ran his backup car after hitting the backstretch well in his primary car in time trials.

Dan Schlieper of Sullivan, Wis., who was scheduled to start outside the front row in the main event, withdrew from the race after being taken to a local hospital following a heat race victory. According to team reports, the 39-year-old Schlieper had high blood pressure and was slurring his speech before he left the track in an ambulance.

“The engine ran great. Everything was good tonight; the car was a lot better,” said the 46-year-old Bloomquist, who notched his 491st career victory overall and series-leading 22nd on the Lucas Oil Series. “Last night we were off a little bit. We went home and worked on it, and had a lot better car tonight.”

McDowell started on the pole with Bloomquist alongside in Schlieper’s slot, and McDowell led Bloomquist, Wells, Steve Casebolt and Cook at the outset. The eighth-starting Madden was on the move early, taking fifth from Cook on the second lap and taking fourth from Casebolt two laps later.

McDowell was into lapped traffic after nine laps, but the field was bunched two laps later for the race’s lone caution for Texas driver Chris Brown.

Wells nearly took second from Bloomquist on the restart while McDowell edged away to lead by six lengths near the halfway point as the frontrunners battled traffic. Bloomquist cut into McDowell’s lead after 28 laps while Wells slipped to fifth behind Madden and Davenport.

After McDowell crossed the line on lap 31, sparks appeared from the back end of his car as a bolt in the lift bar broke, and McDowell pulled to the infield as Bloomquist inherited the lead.

Bloomquist maneuvered through lapped traffic the rest of the way to avoid pressure from his pursuers in the final laps.