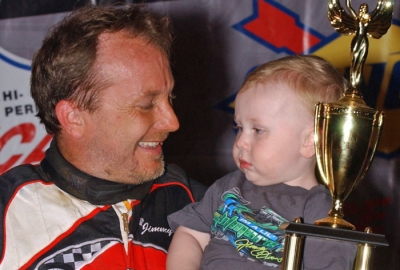 Schlieper, who started outside the front row and paced 48 laps at the 4/10-mile oval, was briefly hung up by the slower Tyler Reddick, costing him momentum that allowed Owens to sneak past for his series-leading fifth victory of 2010.

“That was pretty awesome. We had a great car. We were just able to catch Dan at just the right time. He got slowed up by a lapped car as soon as we caught him, and it just made for a heckuva finish,” said Owens, the night’s fast qualifier who started fifth in the 50-lapper. “I could see the race we were closing in on him ... it just all timed out perfect for us.”

Schlieper, looking for his first series victory since July 2008, had to settle for his second runner-up finish of the season. “It’s a bitter pill to swallow. ... We just came up two laps short at the end,” he said.

Polesitter Jonathan Davenport of Blairsville, Ga., who fell victim to Owens with seven laps remaining, ended up third while Ray Cook of Brasstown, N.C., and Earl Pearson Jr. of Jacksonville, Fla., rounded out the top five.

Davenport and Schlieper started up front with Davenport slipping briefly ahead before Schlieper made a nifty move exiting turn two to take the lead on the backstretch of the first lap. While Schlieper edged away, Davenport swapped the second spot with Billy Ogle Jr. while Cook and Owens gave chase.

Schlieper maintained his lead through lapped traffic while the top five remained the same until Ogle pulled pitside just after the halfway point. Schlieper lost a six-length lead when Mike Marlar slowed on lap 29 to draw the first of two cautions.

Cook took advantage of the restart to move up to third, but action was slowed again two laps later for a slowing John Blankenship. Schlieper edged away again on the restart with Davenport and Owens battling door-to-door for second, and his lead appeared insurmountable with 10 laps remaining.

Owens finally cleared Davenport on lap 43, but Schlieper was aiming toward his first victory since winning three of four series events in 2008.

With traffic slowing Schlieper, Owens worked within striking distance, pulling up on Schlieper’s rear deck on the backstretch of lap 49. When Schlieper tried to get under Reddick but briefly lost momentum, Owens pounced in the inside groove. The frontrunners were side by side exiting turn four and Owens won the drag race down the backstretch, taking command under the white flag.