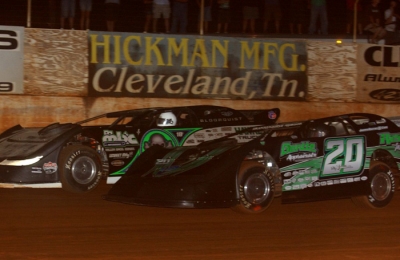 Owens took the lead for good on the 23rd lap at the third-mile oval, earning $10,000 for capturing the fourth annual Car Smart Race for the Cure.

“The fans should’ve got their money’s worth tonight,” said the 38-year-old driver from Newport, Tenn. “Traffic was a blast. I know the first half of the race had to have guys on their toes. My hat’s off to the crew for making a good tire choice and just working hard all week.”

Bloomquist, of Mooresburg, Tenn., led 21 of the first 22 laps but ended up third after losing the second position to Chris Madden of Gray Court, S.C., with 10 laps remaining. Ray Cook of Brasstown, N.C., was fourth and Randy Weaver of Crossville, Tenn., rounded out the top five in front of a packed grandstand. The entire top five save Cook pilot Bloomquist Race Cars.

Owens and Bloomquist started up front in the 50-lapper with Bloomquist leading Owens, Earl Pearson Jr., Madden and Dale McDowell in the early doing.

Owens edged ahead to lead the third lap, but Bloomquist edged back ahead on lap four as Pearson and Madden battle behind them.

After a lap-seven caution for a Chris Wall-Jonathan Davenport tangle in turn two, Bloomquist edged away until hitting lapped traffic on the 17th circuit, allowing Owens to close in. Owens finally squeezed past Bloomquist exiting turn four on the 23rd lap.

After a mid-race caution for Steve Casebolt, Madden secured third from Pearson while Owens began stretching his lead. His pursuers cut into the margin later, but Owens maneuvered through slower cars to maintain a comfortable edge.

Madden got past Bloomquist on the 40th lap, but by then Owens was too far ahead to catch.