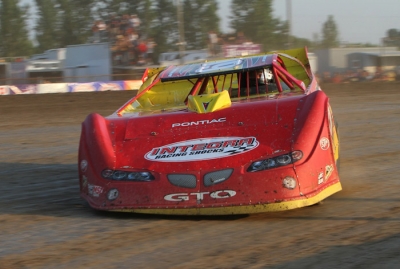 THOROLD, Ontario (June 17) — When Tim Fuller gets hot, he gets red hot. Forty-eight hours after breaking down the door to victory lane for the first time this season, Fuller was at it again on Thursday night, rolling to his second straight World of Outlaws Late Model Series triumph in the Oh Canada Eh 50 at Merrittville Speedway.

Fuller, 42, of Watertown, N.Y., passed Steve Francis of Ashland, Ky., for the lead on lap 29 and never looked back in the national tour’s first-ever visit to the Niagara Frontier track. He pocketed $10,500 for his 12th career WoO victory, eight of which have come as part of win streaks, including two sets of back-to-back victories and his record-tying four consecutive wins last year.

“It’s weird how things work out sometimes,” said Fuller, who recorded his first win of the season in the Great Northern Tour opener Tuesday at his home track, Can-Am Motorsports Park in Lafargeville, N.Y. “We’re definitely going good right now, but it was such a struggle to get here. Maybe now we’re on to something and can keep it up.”

Rick Eckert of York, Pa., slid by Francis for second on lap 32 but never got close enough to threaten Fuller. The 44-year-old steered his Team Zero by Bloomquist car across the finish line 2.368 seconds behind Fuller’s Gypsum Racing Rocket.

Rookie Austin Hubbard of Seaford, Del., who started sixth, finished one second behind Eckert in third place driving Dale Beitler’s Rocket after slipping by polesitter Darrell Lanigan of Union, Ky., for the position on a lap-40 restart. Lanigan, who led laps 1-6 before being overtaken by Francis, settled for fourth in his Rocket mount and Francis faded to fifth at the checkered flag in his Valvoline Rocket.

Fuller, who previously competed at Merrittville in big-block and 358 modified events but never won a feature there, didn’t reach the promised land on Thursday night before experiencing a scare. The powerplant in his car — a Kevlar piece from the Gypsum Express team’s in-house engine program — sucked an intake gasket during hot laps, sending him into full scramble mode to make repairs in time for qualifying.

“I didn’t know if we were gonna get it together,” said Fuller. “We had Francis, Clint (Smith) and my guys all digging in to get it fixed while I was trying to tighten the car up for time trials. We dropped a bunch of silicone on (the intake) so I could qualify, and then when I came back in we cut up a couple of gaskets and kind of cobbed it up.

“It worked — it’s not sucking air. But for peace of mind I want to get it fixed right when we get back to the States. We’re not motor builders.”

Fuller, who started fourth, mastered the D-shaped,third-mile oval to overcome Francis for the lead. After having two potential passes wiped out by successive caution flags on lap 22, Fuller finally surged underneath Francis rounding turns one and two to assume command for good on lap 29.

“He was just hanging on the top because he had the wrong tire on,” Fuller said of Francis, who chose a compound that was too soft to last. “I could just dive down right through the black in the middle and drive by him.”

While Fuller wasn’t quite as dominant as he was in winning at Can-Am, he wasn’t challenged once he gained control of the race. Eckert couldn’t even stay with Fuller after the A-Main’s sixth and final caution flag, on lap 40 for Chub Frank of Bear Lake, Pa., who slowed with right-front suspension damage while battling for a top-10 position.

“I’m just happy to finish second,” said the fifth-starting Eckert, who recorded just his fourth top-five finish of 2010. “We didn’t have anything for Fuller. He was just too good tonight.”

Fuller’s performance made him the center of a unique postrace scene featuring actors from the Oh Canada Eh! Dinner Theatre show in nearby Niagara Falls, Ontario. The performers posed for photos with Fuller dressed in a variety of Canada-themed costumes, including a Royal Mountie who presented Fuller with an eye-catching, custom CNC-machined trophy.

“Anytime a track does something special like that, it’s neat,” Fuller said of the victory lane ceremony that capped an event that drew a nearly standing-room-only crowd to the track. “That trophy alone was amazing. That’s not just some plastic trophy; that’s something you want to display.

“But Pete (Bicknell, the 358 modified driver, chassis builder and co-owner of Merrittville Speedway) does it right. He’s got a good facility, and when you come here you know the whole deal is gonna be done right. It makes you want to come back again.”

Points leader Josh Richards of Shinnston, W.Va., meanwhile, experienced a quiet night, salvaging a ninth-place finish after pitting on lap 16 in hopes of correcting his underperforming machine. The points battle tightened after the event, with Richards’s lead shrinking to 36 points over McCreadie and 40 over Lanigan. Fuller moved past Francis for fourth but is 108 points behind Richards.

John Lobb of Frewsburg, N.Y., pulled off the upset of the night, topping the 27-car field in time trials with a lap of 15.408 seconds. But Lobb’s night took a disastrous turn during the first heat; he relinquished the lead on lap eight when his car’s engine belched smoke and flames heading down the backstretch, forcing him to scratch from the remainder of the program.