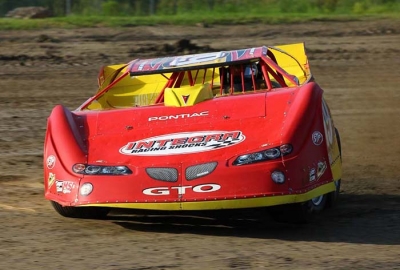 LaFARGEVILLE, N.Y. (June 15) — Tim Fuller found the perfect track to shake him out of his season-long doldrums. With a huge contingent of his family members, friends and longtime fans looking on, Fuller rolled to his first World of Outlaws Late Model Series victory of 2010 in Tuesday night’s at his old stomping grounds, Can-Am Motorsports Park. | Video | Slideshow

A resident of nearby Watertown, N.Y., who was a 358 modified regular at the half-mile oval early in his career, Fuller thrilled the packed house with a nearly flawless performance. He qualified second-fastest in time trials, won a heat race and blasted off the outside pole starting spot to lead the entire 50-lap distance without a serious challenge.

Fuller, 42, crossed the finish line a commanding 3.273 seconds ahead of another hometown hero from Watertown, 2006 WoO LMS champion Tim McCreadie, providing a storybook ending to the national tour’s second annual event at Can-Am.

“You’re not gonna win in a better place this,” said Fuller, who earned $10,500 for his 11th career triumph on the WoO LMS. “Winning my first race of the year here in front of this crowd, all these people who know me — you can’t beat it.

“And then Timmy finishing second — I like when that kind of cool stuff happens. It keeps people interested and coming back for the next one.”

Fuller dominated the opening event of theGreat Northern Tour, outgunning last year’s Outlaw winner at Can-Am, Rick Eckert of York, Pa., for the lead at the initial green flag and never looked back. He easily handled the restarts that followed four caution flags for minor incidents and was barely slowed by lapped traffic as he sailed around the sprawling track in his Gypsum Express Rocket car.

The 36-year-old McCreadie, who started sixth, guided the Sweeteners Plus Rocket up to second place before the halfway mark. But he couldn’t stay with Fuller’s fleet No. 19 after overtaking Darrell Lanigan of Union, Ky., for the runner-up spot on a lap-19 restart.

McCreadie settled for a solid bridesmaid finish at Can-Am for the second straight year, ending the race over three seconds ahead of third-place Lanigan, who started fifth in his 3-race-old Rocket Chassis.

Defending WoO champion and current points leader Josh Richards of Shinnston, W.Va., started and finished fourth in the Seubert Calf Ranches Rocket — after falling as far back as sixth — and ninth-starting Shane Clanton of Locust Grove, Ga., used the outside groove during the race’s late stages to secure a fifth-place finish despite being hampered by a stumbling carburetor.

“That’s all we had,” said McCreadie, who ended the night trailing Richards by 42 points in the standings. “I gave it all I could, but we just had nothing for Fuller. I was just ditch-digging (running the inside lane) all night — that’s all I could do to save my car.

“Fuller and those guys did a heck of a job. I followed that red-and-yellow car all night long.”

“We have nothing to hang our heads about,” he concluded. “If definitely would’ve felt better to win, but we had a good night. This is our hometown and I’m sure the fans are happy no matter who wins as long as we’re both up here.”

Fuller’s victory snapped a 19-race WoO winless streak dating back to the final three events of the 2009 season. Immediately before that he had enjoyed an amazing stretch of seven wins in 11 races — including a tour record-tying four consecutive wins last summer — that made his failure to reach victory lane until Tuesday night one of the mysteries of the ’10 season.

“We’ve sucked all year,” admitted Fuller, whose victory represented just his third top-five finish in 17 races. “We don’t even deserve to be fifth in points right now, but we’ve finished every race and that’s a tribute to the crew.”

What was the key to Fuller’s slump-busting triumph?

“We time-trialed well and won the heat,” said Fuller, who used a motor from the Gypsum Express team’s new in-house engine program. “You gotta time-trial well — that’s all there is to it. Don’t get me wrong, the car was great, but I probably wasn’t gonna come from 15th.

“We’re good in the black-slick (track conditions) like there was tonight — just look at what we’ve done starting in the back of these packs and coming up through this year. Tonight we finally had a good starting position and we were able to capitalize on it.

“I hope we’re back on track now,” he added. “I hope this isn’t just a product of the conditions, a freak thing. I think we’re rolling, but I guess we’ll see in the races coming up.”

Notes: Fuller credited crew chief Mike “Smoke” Countryman for his help. ... Chub Frank of Bear Lake, Pa., advanced from the 13th starting spot to finish sixth despite being hampered by a bent right-front spindle from a mid-race altercation. .... Polesitter Rick Eckert faded steadily throughout the distance to finish ninth. ... Russ King of Bristolville, Ohio, was one lap down in 10th place, matching his best finish of the season. .... Rookie Austin Hubbard of Seaford, Del., finished two laps down in 11th place after a broken rear end caused him to slow while running fourth and ultimately stop between turns three and four with the checkered flag flying. ... Clint Smith of Senoia, Ga., was running third when he brought out one of the race’s four caution flags with a broken engine on lap 18. ... Nine drivers completed 50 laps. ... The qualifying times of Hubbard and Vic Coffey were erased because they were light at the scales. ... Brady Smith of Solon Springs, Wis., holding the eighth spot in WoO points, was a no-show after deciding to drop his full-time pursuit of the series; he’d been at every series event since the 2009 season opener. ... The World of Outlaws continue the Great Northern Tour on Thursday by heading north of the border for a $10,000-to-win event at Merrittville Speedway in Thorold, Ontario.