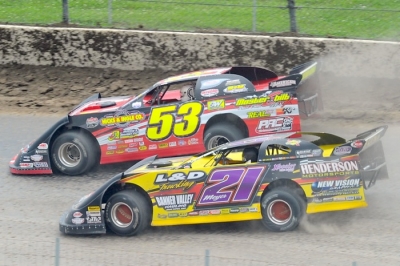 Living up to his Mr. Smooth nickname, the 52-year-old Hall of Famer from Batesville, Ark., overtook Ray Cook of Brasstown, N.C., for the lead on a lap-20 restart and never made a mistake the remainder of the DIRTcar-sanctioned 100-lapper. He tamed a slick daytime track surface dominated by a precarious top lane to pocket the prestigious race’s $100,000 winner’s check for the second time in his legendary career. | Complete Dream XVI coverage

In a race that saw cars repeatedly sustain right-rear body damage from bouts with the Big E’s unforgiving outside wall — including those driven by runner-up Cook and third-place finisher Dale McDowell of Rossville, Ga. — Moyer got his Clements-powered Victory Circle Chassis to the checkered flag virtually unscathed.

“Your mind’s gotta be razor sharp to run on that ledge for a hundred laps like that and never bobble,” said Moyer, describing the thin cushion just inches from the high-banked, half-mile oval’s concrete barrier. “This track is like running on an ice cube. You just slide in there and time it just perfectly to where you get your right front on that lip first. If you get in there a little bit too hard, you’re in the wall over that little berm.”

Moyer, who started from the pole position, weathered a mid-race challenge from 2008 World 100 winner Shane Clanton of Locust Grove, Ga., before pulling away from Cook during the final laps. He crossed the finish about a half-straightaway ahead of Cook, who started second and led laps 1-20 in his battle-scarred MasterSbilt car.

McDowell, who started 19th, benefitted from the race’s attrition to place a quiet third in NASCAR star Clint Bowyer’s Warrior machine. Chris Madden of Grey Court, S.C., started 21st and wasn’t far behind McDowell throughout the distance en route to a fourth-place finish in his Bloomquist Race Car, while Madden’s chassis builder, five-time Dream champion Scott Bloomquist of Mooresburg, Tenn., completed the top five after recovering from a lap 75 pit stop to change a flat right-rear tire in a race postponed by Saturday night rain.

Moyer’s triumph returned him to the spotlight at Eldora, a track he dominated during the ‘90s. He won the World 100 a record five times between 1991 and 2000 and captured the Dream in 1998.

“The last three or four years I haven’t even been close here,” said Moyer, who joined Bloomquist (five) and Freddy Smith (two) as repeat winners of the Dream event. “I’ve been working to try and figure this place out again. Things are so much different from the last time I won here to now.

“The sport evolves so fast and you just gotta stay on top of it, and I think we finally found something that works here again.”

Moyer flexed his new-found Eldora muscle on a lap-20 restart following a caution flag for Brian Shirley of Chatham, Ill., who slowed in turn four with body damage. The veteran dove underneath Cook entering turn one and exited turn two in control of the lead for good.

“I measured him up there on that first (re)start,” said Moyer, who won one of six heat races run on Saturday night before thunderstorms postponed the remainder of the program to Sunday afternoon. “I could’ve did it (made the pass) that first time, but I went in a little soft and I just didn’t want be an idiot and wreck us both like that.

“The next (restart) I just kind of knew where his little weak spot was. It was really early in the race, but I figured the way the track was I better get after it right now and get into the lead.”

Cook, 38, had already damaged the right-rear corner of his car from slapping the wall, but he credited Moyer with a slick move to take command.

“Billy done a good job there,” said Cook, a five-time Dream starter who matched his career-best event finish of second in 2000. “We were talking about him being a senior citizen earlier, but that experience paid off. He got a good run on me on the restart and got us with a slide down there.”

Cook was happy to secure a $20,000 runner-up finish despite racing nearly the entire distance with a crushed rear spoiler and losing second place briefly to Clanton.

“I knocked that (spoiler) off while we were leading actually,” said Cook, who added to his car’s body damage when he slid into the turn four wall while battling for second with Clanton on lap 61. “I just got up there (in the corner) too hard.

“This track was probably as challenging as it gets because it was just really, really slick right to that concrete cushion. But it’s Eldora, and you just gotta stay after it. We almost got it done, so we’ll just come back and try it again.”

Moyer likely saw his stiffest late-race threat disappear when Clanton’s bid came to an abrupt end. Sixth at the halfway mark after starting 10th, the 34-year-old driver vaulted up to second by lap 61 and caught Moyer moments later.

Clanton ducked underneath Moyer rounding turns one and two on lap 65, but that was as close as he got to the lead. His attempt to join Moyer, Bloomquist, Donnie Moran and Jimmy Owens as the only drivers to win both the World 100 and the Dream evaporated when he slowed with a broken right-rear shock bolt on lap 69, bringing out the seventh of the race’s eight caution flags.

The rough-and-tumble 100-lapper was slowed by three caution flags for debris on the track and four for disabled cars. The only serious accident occurred on lap 58 when Jonathan Davenport of Blairsville, Ga., gave up his race-long hold on third place after slapping the turn-one wall, bouncing off Clanton’s passing car and collecting fifth-place Steve Casebolt of Richmond, Ind., whose machine sustained heavy damage, and eighth-place John Blankenship of Williamson, W.Va., who was able to continue.

Defending World of Outlaws Late Model Series champion Josh Richards of Shinnston, W.Va., who started 16th, finished sixth after being knocked from the top five by Bloomquist on lap 91. Don O’Neal of Martinsville, Ind., transferred to the Dream after running the C- and B-Mains and marched forward from the 25th starting spot to finish seventh; Blankenship was the last driver on the lead lap in eighth place.

Several potential challengers saw their hopes dashed by smacks of the wall that tore up their cars and led to their early departures. That group included Steve Francis of Ashland, Ky., who hit the concrete on lap one but still ran fourth until a turn-four wall encounter on lap 41 ended his day; fast qualifier Tim McCreadie of Watertown, N.Y., who climbed from the 13th starting spot to fifth in just eight laps but bent up his mount’s front end when he caught the turn-two wall three circuits later (he ultimately retired with an overheating engine while still holding fifth on lap 55); and Darrell Lanigan of Union, Ky., who was bidding for sixth when he crushed the right-rear corner of his mount on lap 49.