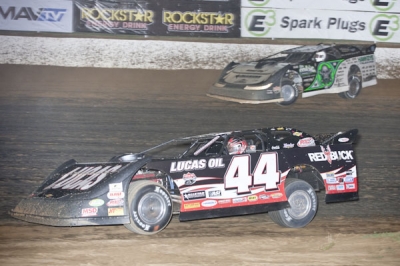 UNION, Ky. (June 5) — Earl Pearson Jr. of Jacksonville, Fla., has been in the mix for a big victory at Florence Speedway more times than he can count on one hand, but he always seems to fall one spot shy at the half-mile oval in northern Kentucky.

Not this time as Pearson, in a classic duel with Scott Bloomquist, held the lead all 50 laps Saturday to capture the 24th annual Ralph Latham Memorial on the Lucas Oil Late Model Dirt Series. | Video | Slideshow

“Before the feature, we were talking about how many second-place finishes we got here, and we counted up to six,” said the 38-year-old Pearson, "so we finally got one.”

Pearson, who took the checkers just a car length ahead of the fifth-starting Bloomquist, earned $10,000 for his third series victory of the season and gained a little ground on Bloomquist in the title chase.

Fourteenth-starting Jimmy Mars of Menomonie, Wis., was just behind the lead battle in finishing third while hometown driver Darrell Lanigan and Audie McWilliams of nearby Walton, Ky., rounded out the top five. Polesitter Ray Cook of Brasstown, N.C., ran second early but fell dramatically from the pace after a lap-18 restart, ending up 21st.

The high-running Pearson started outside the front row and stretched out to an early lead erased by a lap-18 caution for sixth-running Scott James. While Cook faded, Pearson stayed in command through a lap-25 yellow for Matt Miller as Pearson, Lanigan, Bloomquist, McWilliams and Mars held the top five spots.

Lanigan slipped to fourth on the restart and with a long stretch of caution-free racing, Pearson quickly got into lapped traffic while a dueling Bloomquist and Mars gained ground.

“I didn’t really know how long the top would last,” Pearson said of his preferred groove. "They wet it quite a bit, and it was quite brown up there at the beginning, but it was going away in a hurry. When I saw Scott’s nose, I knew I had to start moving around and change my line.”

Bloomquist moved in to challenge late in the race, once slipping under Pearson exiting turn two. But Pearson quickly answered the move, diving back under Bloomquist and outracing him down the backstretch to regain command entering turn three.

“He slid up in front of me, and I turned like like, I guess, an old Earnhardt move,” Pearson said with a smile.

“We ended up getting in a little hot and had to slide it up to the cushion. When he got back under me, he did get enough of a run that he could maneuver me .... I had to give a little. If I would’ve been able to maintain just a quarter of a car more, I could’ve won the race,” Bloomquist said.

Bloomquist got back within striking distance at the white flag, but he couldn’t find a way past Pearson as the two continued to duke it out in a thriller.

“I actually thought that I might’ve had a shot at him right there” at the finish, Bloomquist said. "People say, ‘Scott’s points-racing.’ I don’t think you could watch that race and call us points-racing.”

Mars couldn’t quite get close enough to improve on his third-place finish.