Neat fights off Casebolt for $10,000 at Tazewell 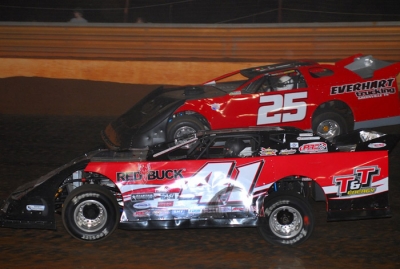 “You can’t believe how good it feels, especially with my crew. You know those guys have gotta get down, I’ve been down. I can’t thank Mark (Hopper) and Eric (Fulwood) enough,” said Neat, 12th in Lucas Oil Series points. "It’s like the further we get down, the harder they work. Earl and Matt (Langston) and (team manager) Jason (Fitzgerald), those guys have been great confidence-builders, they just stay after me and keep me pepped up there. You can’t believe how good it feels. It’s truly great to get back in here and get a win.”

Neat slipped by polesitter Rodney Kiker of Greeneville, Tenn., on the 17th lap and held the top spot the rest of the way, battling one-laned track conditions that made overtaking slower cars a tricky proposition. Casebolt, who started outside the front row and finished second, knew he lost a golden opportunity when he let Kiker and Neat slip ahead of him on the opening lap as he battled a tight-handling car.

“I gave it my all. A lot of times in the rubber you’ll settle for second and just take second, but I figure I’ve lost bigger races than this one, so I just went for broke,” said Casebolt, who took second from Kiker on the 19th lap and chased Neat the rest of the way on the high-banked third-mile oval. "I was hoping that lapped car (of Tim Isenberg) would slide up in front of him and he’d try to go low and they’d get boxed in together and I’d drive right around ‘em on the outside, but there just wasn’t enough rubber up there. So it didn’t work out, but we gave it a shot.”

Kiker, the surprising polesitter in his first-ever Lucas Oil Series feature, faded after his early stint up front and dropped out on lap 54 with a flat tire, finishing 18th in the 24-car field.

Neat never lost the lead but faced plenty of pressure from Casebolt, mostly during a stretch midway through the race and again in the closing laps when Neat was held up while trying to put a lap on Isenberg.

“I knew they’d be right there,” Neat said. "We never really pushed our car really hard. That thing just seemed like it rolled right around there, but I knew they were close, and I just knew as long as I stayed under Isenberg there, there wasn’t enough of a hole for the second- and third-place car to get through there.

“I knew it was going to rubber up. We talked about it and we were trying to decide what lap it was going to, and we figured it would be early, so I knew if we had a chance to get up there and win, we were going to have to make a move quick.”

Three cautions slowed the action, first for Mike Marlar’s flat tire on the 24th lap, then again on the restart when Chris Wall and Tyler Reddick got together in turn three. The final yellow appeared for Kiker’s lap-54 flat tire.