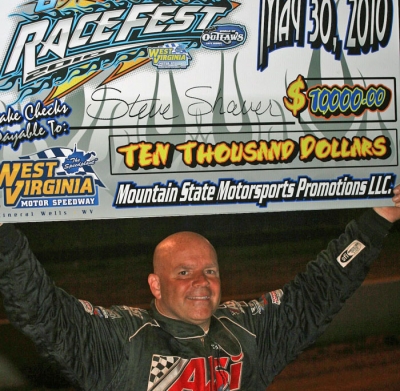 Shaver, 46, dominated on the eve of Memorial Day, charging off the outside-pole starting spot to lead the entire distance in the K&L Rumley Motorsports Rocket No. 6. He raced virtually unchallenged to the $10,125 victory, which gave him a two-night earnings total of $18,200.

"Coming here this weekend I was kind of hoping for a couple of top fives, maybe a win if everything went right," said Shaver, who had one career WoO triumph before going 2-for-2 at the sprawling 5/8-mile oval that sits just 10 miles from his home. "To get a win in both of them, set fast time (Sunday) and win two heats — I can't quit smiling."

Shaver built a lead that ballooned to as much as three-quarters of a straightaway before crossing the finish line about a dozen car lengths ahead of Zanesville, Ohio's Bart Hartman, who steered his Rocket car forward from the 12th starting spot to record a runner-up finish for the second consecutive night. Hartman lost Saturday evening's 30-lapper when he was overtaken by Shaver in lapped traffic with only five laps remaining.

Shane Clanton of Locust Grove, Ga., relinquished second place to Hartman on lap 36 but held on to finish third in the RSD Enterprises Rocket, Filling out the remainder of the top five was third-starter Steve Francis of Ashland, Ky., who was in the battle for second place until backing off late in the distance due to an overheating engine in his Valvoline Rocket car, and polesitter Donnie Moran of Dresden, Ohio, in his MasterSbilt.

Shaver was simply the class of the field in the RaceFest finale. He survived caution flags on laps 13 (after Brent Robinson of Smithfield, Va., suffered suspension woes and slapped the turn-two wall while running 10th) and 16 (for a turn-four tangle involving Brady Smith of Solon Springs, Wis., and Jill George of Cedar Falls, Iowa) en route to joining Josh Richards of Shinnston, W.Va., as the only repeat winners in 16 WoO events this season.

"Kevin (Rumley) made some changes to the car today and it actually got better," said Shaver, who joined the venerable North Carolina-based K&L Rumley team at the start of the 2010 campaign. "I didn't think it could be much better than last night, but it was. It just felt so easy out there.

"The only problem I had was that I really didn't know where I needed to be on the track, so every now and then I tried to search around and see where the car felt best. I finally felt like I had the right line so I just stayed right there. I thought, If I'm gonna get beat, somebody's gonna have to pass me fair and square."

Hartman, 41, never got close enough to even attempt to turn the tables on Shaver. He had to make up too much ground after falling from a battle for second to a fourth-place finish on the final lap of his heat race.

"We had an MSD problem at the end of the heat that caused the motor to drop a cylinder," said Hartman. "That knocked us from possibly redrawing for the (first three rows in the) feature to starting 12th — and you can't start 12th and expect to win against the caliber of cars that were here.

"We had a real good car again and moved up, so we're happy. Steve's been real good down here all weekend and deserved to win."

The 34-year-old Clanton, meanwhile, drove to his third-place finish using an experimental aluminum big-block engine built by Russell Baker that he borrowed from Tim Logan, who serves as Francis's crew chief and fields a car that Francis runs in selected non-Outlaw events. The 502 cubic inch behemoth worked well for Clanton.

"It was pretty good," Clanton said of the powerplant. "It just needs a little work to race with these guys. Once we got racing, those little motors could accelerate in the cushion a little bit better than I could.

"That motor is just so hard to drive. It's got so much power and the throttle response is there, but when you gotta go easy out there — like (Shaver) was — then it can be a little lazy. That's something we can work on and get better, though."

Darrell Lanigan of Union, Ky., and Tim McCreadie of Watertown, N.Y., finished sixth and seventh, respectively, while Richards placed a quiet 11th, tightening the WoO standings slightly. Richards left WVMS leading the battle by 46 points over McCreadie, who started 21st after being forced to the consolation race by a blown right-rear tire during his heat, and 52 over Lanigan.

Finishing in positions 8-10 was Tim Fuller of Watertown, N.Y., who also used an aluminum big-block engine in both weekend events; Vic Coffey of Caledonia, N.Y., and Davey Johnson of Latrobe, Pa.

Brady Smith and Austin Hubbard of Seaford, Del., were forced to run backup cars after each crashed hard into the wall between turns three and four during their time-trial runs. Smith said he had some back soreness but was otherwise uninjured, while Hubbard reported no ill effects after absorbing what he called the hardest hit of his young career.

The stars of the series will have a two-week break before hitting the road for the first extended swing of the 2010 season, the eight-race Great Northern Tour that visits six tracks in New York, Pennsylvania and the Canadian provinces of Ontario and Quebec from June 15-June 26.