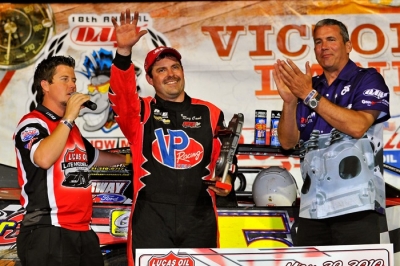 But when the 38-year-old Cook, of Brasstown, N.C., found his car handling like the one that carried him to a Show-Me 100 title 10 years ago, and the 3/8-mile Wheatland surface reminding him of the 3/8-mile West Plains oval, his struggles were suddenly behind him.

Battling up front with fellow MasterSbilt house car driver Don O'Neal much of the way, Cook led the final 11 laps of the Lucas Oil Late Model Dirt Series event to earn $30,000 and add another Show-Me 100 trophy to the one he captured in 2000.

"They had the racetrack just as close to it as they could get it (to West Plains) tonight," the 11th-starting Cook said. "They did a great job preparing the track. You could race all over it, and it brought back a lot of memories to 10 years ago. You never know when you're going to get another one, so I mean, we just try to cherish each one and be so thankful we were able to get another one."

Cook ended up on top at the finish of a wild 100-lapper full of cautions, pit stops, flat tires and heartbreak for two leaders. Polesitter and early leader Jimmy Owens of Newport, Tenn., was collected in a turn-four scramble on the 10th lap, and 22nd-starting Steve Casebolt of Richmond, Ind., rallied past Cook and into the lead on the 76th lap, but broke a driveshaft 13 laps later and fell out of the race.

The low-running O'Neal, of Martinsville, Ind., couldn't keep up with Cook in the closing laps and settled for second place while regional standout Terry Phillips of Springfield, Mo., nearly slipped out of contention before rallying to finish third. In the attrition-filled race, Eric Wells of Hazard, Ky., rallied from his 27th and provisional starting spot to finish fourth for a career-high $4,000 payday, and 24th-starting Dennis Erb Jr. of Carpentersville, Ill., rounded out the top five.

Owens dominated early in the race, stretching out to a straightaway lead and lapping cars after just seven laps. But when Brian Birkhofer spun in turn four and Chris Wall's No. 71 in making contact, it blocked the path of Owens, who skidded into the mess. He pitted for repairs and briefly got back into the top 10, but got into the turn-four wall on lap 56 and fell out.

O'Neal took command on the 11th lap and built comfortable leads despite several cautions while Cook eventually dispatched of Phillips, Earl Pearson Jr. and Billy Moyer in working his way into second. Cook turned up the heat on O'Neal just past the halfway point, taking the lead on the 60th lap just as the charging Casebolt was making his move.

The three-wide duel of Cook, Casebolt and O'Neal was slowed by a lap-65 caution, and Casebolt — after surviving frontstretch contact with O'Neal on lap 67 — later regained his momentum and caught Cook, working under him after a side-by-side duel to edge ahead with 24 laps remaining.

Casebolt pulled away and appeared headed for the second-richest victory of his career when his car slowed on the frontstretch of lap 89 after his car's driveshaft fell to the racing surface.

"It's just miserable. Miserable," a near-inconsolable Casebolt said later in the pits. "I haven't felt this bad in a long time."

Cook regained the lead, but two more late restarts gave O'Neal two final chances. The higher-running Cook was able to edge away over the final laps and grab the victory in front of a huge crowd at the state-of-the-art oval.

"I did everything I could and about wrecked Ray and myself just trying to stay up there," O'Neal said. "We did everything we could do. We didn't leave anything out there, so we had a second-place car out there tonight, bottom line."

Cook credited a car that allowed him to run high or low in carrying him to victory in Missouri's richest Dirt Late Model event.

"I knew the car was maneuverable, and it reminded me of the car I had back in 2000," Cook said. "We didn't have the fastest car then, but we could just make consistent laps, high, low or in between, and that's what it takes in a 100-lap race."

The event was marred by the disqualification of Will Vaught of Crane, Mo., after he rammed Jesse Stovall's car in the hot pit area while crew members were working on it during a lap-58 caution, shoving the car out of the hot pits behind turn two. Lucas Oil Series director Ritchie Lewis said more disciplinary action would be taken against Vaught on Tuesday.