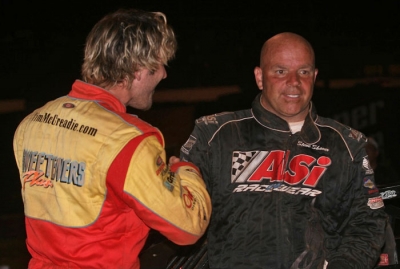 MINERAL WELLS, W.Va. (May 29) — Steve Shaver was a hometown hero Saturday at West Virginia Motor Speedway. Racing in front of a legion of family members and friends at a track just 10 miles from his home in Vienna, W.Va., Shaver came out on top of a titanic four-car duel to win the 30-lap World of Outlaws Late Model Series event that opened the 5/8-mile oval's two-day RaceFest World Championships. | Slideshow

Shaver, 46, snuck by Bart Hartman of Zanesville, Ohio, for the lead on lap 25 and spent the remainder of the distance holding off Hartman, Tim McCreadie of Watertown, N.Y., and Chub Frank of Bear Lake, Pa., to pocket a first-place prize of $8,075.

There was plenty for Shaver to smile about after the event, which brought WVMS back into the national spotlight after two years of inactivity. Not only did he win at the track he lists as his favorite for the first time in years, he also scored his initial victory since taking over as the driver of the Greenville, N.C.-based K&L Rumley Motorsports Rocket No. 6 earlier this year.

"It's been a long time since we've won down here so it feels great," said Shaver, who registered his second career win on the WoO LMS. "But more than anything, I'm just so happy to get a win for the Rumleys (Kevin and Lee Roy). I've raced against them for years and I've always really respected them, so it's been a real pleasurable experience to get a chance to drive for them."

Hartman settled for a second-place finish in his Rocket car, a few lengths behind Shaver at the checkered flag. The race's polesitter inherited the lead when early pacesetter Darrell Lanigan of Union, Ky., slowed with a flat left-rear tire on lap 10 but couldn't beat back Shaver's challenge.

The eighth-starting McCreadie finished third in the Sweeteners Plus Rocket and third-starter Frank placed fourth in his Corry Rubber Rocket after both drivers made bids for the lead in the closing laps. Shane Clanton of Locust Grove, Ga., improved one spot from his starting position to complete the top five in the RSD Enterprises Rocket.

Shaver, who started fourth in a car that carries a Chevy engine built by team co-owner Lee Roy Rumley, seized an opening in lapped traffic to steal the lead from Hartman with an inside move through turns one and two on lap 25. He had erased Hartman's half-straightaway edge to put himself in position to slide in front.

"Before that one caution (on lap 10 for Lanigan) I actually got underneath Bart," said Shaver, whose first WoO victory came on July 24, 2009, at Attica (Ohio) Raceway Park. "He got away a little on the restart, but after a few laps I just felt like his car was coming back to me.

"Once I caught him I made a couple — I don't want say crazy moves, but pretty aggressive moves in lapped traffic. I did it because Bart's won more races here than anyone, so I knew if I got the opportunity to get by him I had to take it right now.

"I was just lucky it worked," he added. "I think I just saw an opening and was lucky enough to make it happen."

Shaver survived several anxious moments during the final circuits, including a near-spin in turn four when he tangled with a lapped car and virtual non-stop threats from Frank (he dived underneath Shaver twice in turn three), McCreadie (he nearly snuck outside Shaver off turn two on lap 27) and Hartman (he made one more inside bid to regain the lead rounding turns three and four on the last lap).

Hartman, 41, was gracious in defeat. He was looking for his first WoO LMS victory since 2004, when he won five times in his only season a tour regular.

"I just couldn't get through lapped traffic like Steve," Hartman said. "(The lapped cars) were side-by-side and my car wouldn't move around the bottom like his would.

"We had a good lead for a while, but a little after the caution it just dwindled and then I had those guys on top of me. We just did the best we could."

The 36-year-old McCreadie nearly swept by all three drivers ahead of him on lap 27 when he discovered the outside lane around the track, but he couldn't make a move stick.

"I just found the outside late," said McCreadie. "I didn't go up there until like three or four to go. I got a good run on Shav, but he never knew I was all the way out there so I could never stay out there. If I could've just got up beside him a little more getting in the corner, I might have been able to get by him.

"It was a heck of a race, though. The four of us were thrashing it out."

McCreadie's 10th top-five finish of the season moved him to second in the WoO LMS points standings, jumping him past Lanigan, who could only salvage a 14th-place finish after suffering a flat tire while leading for the third time in 2010. McCreadie closed to within 54 points of Shinnston, W.Va.'s Josh Richards, who was never a factor all night and finished 11th.

Frank, 48, enjoyed his best finish of the 2010 WoO LMS, but he felt he was just a slight adjustment from perhaps securing a victory.

"I was good, but I was little too tight," said Frank, who recorded just his second top-five finish of the season. "I'll tell 'ya, if it would've turned getting in, I might have had a shot at those guys. I just picked up a push getting in and I couldn't hold the car down where I needed to be."

Frank raced after spending much of the afternoon at a local hospital with his wife Mary, who was admitted for observation after falling ill at the track. Frank returned to the speedway just before the start of the hot laps.