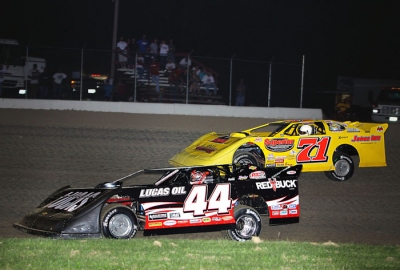 WEST BURLINGTON, Iowa (May 23) — Earl Pearson Jr. of Jacksonville, Fla., made it two in a row at 34 Raceway — six years after his victorious debut at the 3/8-mile oval — by capturing Sunday's Lucas Oil Late Model Dirt Series event worth $10,000.

Pearson, who earned his second Lucas Oil Series victory of the season, won at 34 Raceway in his first visit to the track since his July 14, 2004, victory on the UMP DIRTcar Summernationals circuit. | Video

"The track was real good tonight, just like I remember it six years ago when we came here and won," said Pearson, who returned to the track after Friday's race was postponed 48 hours. "It feels good to come back here and win again. This is a really nice facility and the track crew did a great job considering how much rain they had."

The fifth-starting Pearson made quick work of polesitter Don O'Neal of Martinsville, ind., taking command on the second lap and leading the rest of the 50-lapper for his 19th career series victory.

Outside front-row starter Ray Cook of Brasstown, N.C., was second followed by series rookie Will Vaught of Crane, Mo., who advanced nine positions. Dale McDowell of Rossville, Ga., charged from 17th to finish fourth and 11th-starting Jimmy Mars of Menomonie, Wis., rounded out the top five in the 12th series event of the season. O'Neal ended up 10th after pitting for fresh tires midway through the race.

O'Neal and Cook led the 25-car field to green but it was Pearson quickly grabbing the inside lane and racing his way to the front after O'Neal led the first lap. Pearson began pulling away as Cook dropped O'Neal to third before a lap-six caution for Jason Utter's flat tire.

After another yellow for Mike Marlar's flat tire, Pearson edged away again while Dennis Erb Jr. of Carpentersville, Ill., moved into third and Mars broke into the top five.

Pearson was comfortably ahead after 15 laps with Cook, Erb, Mars and O'Neal giving chase. Vaught took fifth from O'Neal two laps later and the pack began to catch Pearson as he faced lapped traffic after 20 laps.

Pearson, Cook and Mars ran 1-2-3 at the halfway point, and Pearson had a scare when the slower Chris Wall spun right in front of him on the 26th lap as the leader barely avoiding contact.

On the restart, Vaught went from fifth to third while McDowell worked his way up to fourth. But up front, Pearson was in complete control with 20 laps remaining while Cook and Vaught tussled for the second spot behind him.

Pearson negotiated lapped traffic well enough to avoid any challenges the rest of the way in scoring his first series victory since Feb. 4 at East Bay Raceway Park in Gibsonton, Fla.

"We are really running good here lately," said Pearson, third in series points behind the two previous series event winners, Scott Bloomquist and Jimmy Owens. "We got second last night at La Salle (Ill.) and we're going to make this a good race for the points title here soon if we keep this up. I am sure (car owner) Bobby (Labonte) is going to proud of the team. It's always good to keep the boss happy and we look forward to going to Wheatland (Mo.) next weekend for the Show-Me 100, and we will try to get that one."

Notes: Pearson's MasterSbilt Race Car is powered by a Larry Wallace Racing Engine and sponsored by Lucas Oil Products and Red Buck Cigars. ... Pearson is a perfect 2-for-2 in career visits to West Burlington. ... Among drivers failing to make the feature event: Jason Frankel, Shannon Babb, Denny Eckrich, Jay Johnson, Mark Voigt, Matt Miller and Chris Simpson. ... Next up for the Lucas Oil Series is the $30,000-to-win Dart Show-Me 100 on May 28-29 at Lucas Oil Speedway in Wheatland, Mo., a race moved from West Plains (Mo.) Speedway.