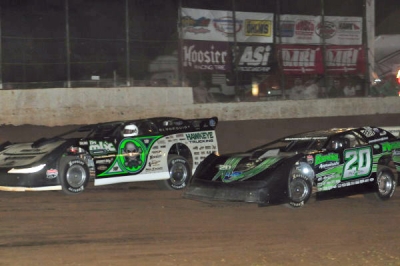 The seventh-starting Owens, who took the series points lead from Bloomquist by winning the last three Lucas Oil events, nosed in on Bloomquist several times and nearly edged ahead just past the halfway point. But Bloomquist, who started outside the front row, was never headed in racing to his series-leading 21st career victory and 490th of his career overall.

Bloomquist's victory moved him into a the points lead with Owens, who entered the 11th series event with a 30-point lead. Last year's series champion sees a title chase brewing with his fellow Bloomquist Race Cars competitor.

"You can bet it's going to be tooth and nail to the end," Bloomquist said. "We finally stopped his streak at least."

Owens lost the second spot to 11th-starting Earl Pearson Jr. of Jacksonville, Fla., on the final lap at the quarter-mile oval, while Matt Miller of Waterville, Ohio, rallied from his 18th starting spot to finish fourth. Doug Drown of Wooster, Ohio, ran in the top five virtually all race long and was a series-best fifth in front of one of the biggest crowds in La Salle history.

Polesitter and fast qualifier Mark Burgtorf and Bloomquist led the 25-car field to green with Bloomquist setting the early pace over while while Drown quickly pressured Burgtorf for the second spot, taking that spot on the 11th lap before the leaders entered lapped traffic. Owens worked his way into third before the first caution for Dale McDowell's lap-25 spin.

On the restart, Owens swept into second and began turning up the heat on Bloomquist by lap 30 while Pearson and Miller tried to track down the leaders. Owens got alongside the leading Bloomquist on a few occasions, but couldn't quite pull off the pass.

"Whenever I'd get beside him, I'd have to pinch the corner off a lot more than I needed to, and I wasn't able to come off the corner once I was beside of him, and that really kept him in front of me," Owens said.

A lap-36 caution for debris slowed the action, but Owens again took several stabs at Bloomquist before the final yellow flag on lap 44 for Steve Casebolt's turn-four spin.

Bloomquist edged away on the restart and completed the flag-to-flag victory while Pearson slipped past Owens on the final lap.

“Pretty intense, wasn’t it?” Bloomquist remarked. “I knew he was there because I saw his nose a couple of times.”