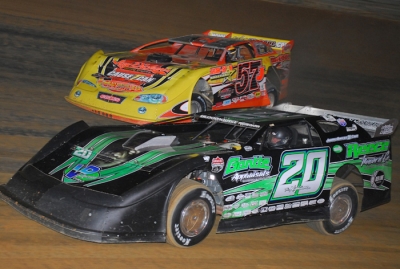 The $10,000 triumph marked his fourth victory in his last five overall starts and moved Owens into the Lucas Oil Series points lead for the first time in his career.

The 38-year-old Owens overtook front-row starter Earl Pearson Jr. and led the finally 41 laps at the Fred Brown-promoted half-mile oval which hosted the series for the first time.

"Man, I have to thank the crew again," a smiling Owens said in victory lane. "They did a great job as usual and everything's clicking right now

"They made us earn it tonight. We started fifth but the car took off real well and we got off to a good start. It didn't take long to get up there, and Earl and I had a great race going. We gave each other plenty of room and I was fortunate enough to get by him."

Pearson settled for second while 10th-starting Dale McDowell of Rossville, Ga., was third on a night when rain delayed action briefly after the first heat race and hit again after the checkered flag fell. Steve Casebolt of Richmond, Ind., and reigning series champion Scott Bloomquist of Mooresburg, Tenn., rounded out the top five. Bloomquist lost the series points lead for the first time in 13 months.

"We are just worried about the wins right now," said Owens, who has finished third or better in his last six starts overall. "We are really on a hot streak and if we keep winning, the points will come along.

Bub McCool of Vicksburg, Miss., and Pearson made up the front row for the 50-lapper held in front of the jam-packed hillside grandstands. Pearson took the lead at the drop of the green flag with McCool, Jonathan Davenport, Owens and Dennis Franklin giving chase.

After finishing second in his heat race to McCool, Owens quickly headed to the front, taking the second spot from McCool after two laps. Pearson and Owens then pulled away from the pack before McCool slowed and dropped out of the race on the seventh lap.

Owens began pressuring Pearson with the frontrunners battling for a half-dozen laps before Owens took command on the 10th lap, just before a caution for a slowing Franklin, who also brought out another yellow a lap later.

Owens led on the lap-11 restart over Pearson and eighth-starting Will Vaught of Crane, Mo., with Vaught swapping the runner-up spot with Pearson over the next several laps.

Out front, Owens was on cruise control, stretching his lead over Vaught, Pearson, McDowell and Casebolt through the middle of the race. Vaught's race ended with a broken rear end on the 27th lap, and he stopped in turn four for the second yellow flag.

Owens edged away on the restart but faced lapped traffic with eight laps remaining. It appeared Pearson might be able to close the gap, but Owens negotiated the slower cars without a problem in completing his victory.