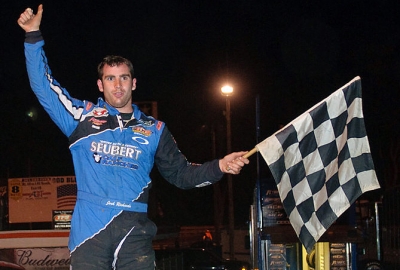 The national tour's defending champion was nearly perfect in earning back-to-back triumphs, both worth $10,675. He led every lap of Thursday's First State 50 at Delaware International Speedway and all but one circuit Saturday at Hagerstown, a half-mile oval where he's raced often during his seven-year career. | WoO notebook | Video | Slideshow

Richards, 22, of Shinnston, W.Va., lost the top spot to Steve Francis of Ashland, Ky., on lap 18 of the Conococheague 50 but regained it the following tour. He controlled the remainder of the distance behind the wheel of his Rocket Chassis house car, keeping Francis at arm's length en route to his series-leading fourth win of 2010.

"We had an awesome weekend," said Richards, the WoO points leader and only driver with more than one tour victory after 14 events on this season's 48-race schedule. "We were able to qualify good both nights, run good in the heats, start from the outside pole twice and stay up front in clean air. We couldn't ask for things to go any better."

Darrell Lanigan of Union, Ky., finished second, less than a second behind Richards after overtaking Francis with an outside move off turn four on the final lap. Francis settled for third — his second consecutive show-position finish — after starting from the pole and running second for virtually the entire event.

There was also a last-lap pass for fourth place, which Jason Covert of York Haven, Pa., claimed by slipping past Nick Dickson of Lewistown, Pa. The move earned Covert, who started 11th in Barry Klinedinst's Rocket, a $500 bonus for being the highest-finishing driver who hasn't won a WoO feature and isn't among the top 12 in points. The seventh-starting Dickson posted his best career WoO finish.

Richards captured his second career WoO event at Hagerstown, finally returning to victory lane at the Frank Plessinger-promoted facility nearly three years after his initial triumph on July 21, 2007. It was his 24th career win on the tour since 2004, moving him closer to Francis's all-time best total of 27 wins.

Francis, of course, proved to be Richards's strongest challenger. Francis managed to sneak ahead to lead lap 18, but he couldn't stay in front and ultimately saw his hopes hampered by the three caution flags that flew during the race's middle stages.

"I didn't really know where I had to be in lapped traffic and Francis got by me (for the lead) because I was kinda messing around in the middle," Richards said. "But luckily we were able to get back in front of him. He slipped up off the corner, and I was able to turn underneath of him.

"We were actually fortunate to have cautions come out when they did. My tires got hot (during extended green-flag periods), and then it seemed like my car would push worse and worse. Those cautions helped us cool the tires, get regrouped and figure out what we needed to do."

The slowdowns were a killer to Francis, who appeared ready to turn up the pressure on Richards just before each yellow flag was displayed.

"I didn't need them cautions," said Francis, the 2007 WoO titlist. "I felt like our car was a little better on long runs and Josh was better on firing off (on restarts) for some reason.

"It's all would of-could of-should of, but I feel like we were moving in on Josh every time the caution came out. Who knows if we would've been able to pass him, but I think we had a good shot."

Francis, 42, ultimately lost second to Lanigan exiting turn four with the checkered flag flying. Lanigan came on strong late in the distance, exploding from 11th place on lap 20 to fourth just 12 circuits later. It took him until lap 42 to get by Dickson for third, however, and he only had enough time left to grab second from Francis.

"We were too tight at the start, but we got better and better," said Lanigan, the 2008 WoO champion. "We were coming. It would've been close if we had a few more laps."

Notes: Richards drives a Cornett-powered Rocket Chassis sponsored by Seubert Calf Ranches, Ernie D's Enterprises and Ace Metal Works. ... Each of the race's three caution flags was triggered by a WoO regular, beginning on lap 20 when 2006 champion Tim McCreadie of Watertown, N.Y., pulled his Sweeteners Plus Rocket to a stop on the inside of the homestretch while running sixth. McCreadie was in pain when he jumped out of his cockpit because hot fluid from a leaking oil line splashed on his right leg, but he did not suffer a significant burn. ... Shane Clanton of Locust Grove, Ga., slowed on lap 31 while running ninth with a broken power-steering pump, and Rick Eckert of York, Pa., retired after a broken rear end forced him to fall off the pace on lap 39 while holding fifth place. ... Eckert lowered the track record in time trials with an 18.096-second lap, erasing Billy Moyer's 5-year-old mark of 18.097 seconds. ... Heat race winner Marvin Winters had engine problems in his No. 46 and drove Ronnie DeHaven Jr.'s No. 19, dropping him to the tail from his original fourth starting spot; he pulled in before the 10th lap of the main event. ... WoO competitors take a break before three Memorial Day weekend races at Bedford (Pa.) Speedway on May 28 and at West Virginia Motor Speedway in Mineral Wells on May 29-30.