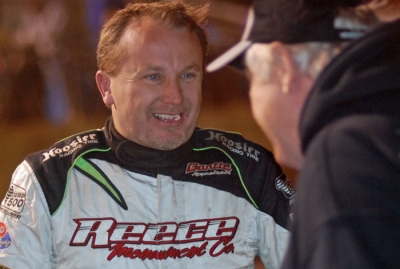 Owens, 38, of Newport, Tenn., grabbed the lead from Steve Francis of Ashland, Ky., on lap two and never looked back in the national tour's inaugural visit to the high-banked, half-mile oval. He survived a stern mid-race challenge from another Kentuckian, Darrell Lanigan of Union, to become the 11th different victor in 12 WoO events this season. | Video | Slideshow

It was the third career triumph on the WoO for Owens, who has won three times and hasn't finished worse than third in the five starts he's made since late-March. His successful early-season run in the Reece Monuments Team Zero by Bloomquist car includes a second-place finish in the WoO Commonwealth 100 on April 17 at Virginia Motor Speedway.

Francis, who started from the pole position but fell back to fifth after a lap-two restart rallied to finish second in his Valvoline Rocket car. He snatched the runner-up spot from Lanigan on lap 43 but never challenged Owens, crossing the finish line 1.725 seconds behind at a track that's promoted by his in-laws David and Anita Ferrell.

Lanigan settled for third place after a lap-21 scrape with Owens damaged the front end of his car, effectively ending his hopes of completing an impressive charge from the 11th starting spot to the lead. Outside polesitter Don O'Neal of Martinsville, Ind., finished fourth in the MasterSbilt house car and 12th-starting Shannon Babb of Moweaqua, Ill., completed the top five.

The race's most important moment was the contact between Owens and Lanigan as they raced for the lead on lap 21. Lanigan hugged the bottom of the track to pull alongside Owens through turns one and two, but exiting the corner Owens came down the track and touched the right-front of Lanigan's car, causing the 2008 WoO champion to get out of shape and fall to third.

Lanigan regained second from O'Neal on a lap-25 restart and briefly threatened Owens after the fourth and final caution flag on lap 33, but his car wouldn't allow him to ascend into the lead.

"I don't know if he didn't see me or what, but when I got together with Owens it messed up the front end a little bit," said Lanigan. "It knocked the toe out on the right front and we weren't as good as we had been. We went a little softer on tires too, so when the track kind of went away at the end we were holding on."

Owens directed his apologies for the incident toward Lanigan.

"I was touching the cushion on the high side," said Owens, who earned $10,000 for his fourth career win at Bluegrass. "I rolled off (turn two) and seen Lanigan there (on the inside) about the same time I was done committed to the brown to get around the lapped car. I kind of misjudged – I didn't think Darrell would throw it out as far as he did and we just bumped a little bit. It was just a racing deal. I hope he feels the same way."

Francis, meanwhile, was satisfied with his second-place finish. It was a marked improvement over his disappointing 10th-place run in the previous night's WoO event at Lincoln (Ill.) Speedway.

"I couldn't run with Owens," said Francis, who married the Bluegrass Speedway promoters' daughter, Amanda, on Feb. 27. "But I can't complain about a second. At one point I thought I was gonna be about a 10th place car, so we were fortunate to get back to second."

Defending WoO champion Josh Richards of Shinnston, W.Va., who entered the event tied for the points lead with McCreadie, finished 12th after pitting to change a cut right-rear tire on lap 25 while running inside the top 10. He left Bluegrass trailing McCreadie by 10 points.

Other caution flags were caused by Jordan Bland of Campbellsville, Ky., who stopped in turn four with engine problems on lap one; Brady Smith of Solon Springs, Wis., who started sixth but fell to the back of the pack after a scramble sent him against the wall between turns one and two on the second lap; and Dustin Neat of Dunnville, Ky., who slid across the track in turn four on lap 33.

Notes: Owens drives a Mike Reece-owned Bloomquist Race Car with a Cornett engine and sponsorship from Reece Monument and Gantte Appraisals. ... Forty cars were entered in the event, but only 39 competed after Matt Miller of Waterville, Ohio, scratched for the night before hot laps. ... Don O'Neal lowered the track record in time trials, blazing around the track in 14.563 seconds (123.601 mph). It was his first career fast-time honor in WoO competition. ... WoO competitors head east for a doubleheader, visiting Delaware International Speedway in Delmar on Thursday and Hagerstown (Md.) Speedway on Saturday. Both events will feature 50-lappers paying $10,000 to win.