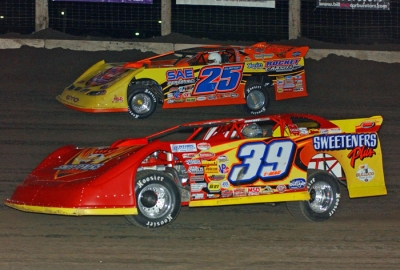 LINCOLN, Ill. (May 7) Shane Clanton ended his 13-month winless drought on the World of Outlaws Late Model Series in the most dramatic way possible.

Taking advantage of a problem in lapped traffic that Josh Richards experienced on the final lap, Clanton jumped to the outside racing off turn four and beat the defending tour champion to the finish line by mere inches to capture Friday night's caution-free Land of Lincoln 50 at Lincoln Speedway. | Video

Clanton, 34, of Locust Grove, Ga., appeared headed to a second-place finish after Shinnston, W.Va.'s Richards used the inside groove to grab the lead on lap 43. But Richards scrubbed off significant speed when he tangled with a slower car entering turn three for the last time, opening the door for Clanton to steal his first WoO triumph since April 4, 2009, at Farmer City (Ill.) Raceway.

"I'd rather be lucky than good any time," said Clanton, who snapped a 44-race winless streak with his 12th career victory on the WoO. "We needed a win bad, so we'll take it any way we can get it."

The 22-year-old Richards finished second in his Rocket Chassis house car. Brian Birkhofer of Muscatine, Iowa, advanced from the 10th starting spot to place third in his MB Customs mount, followed by Tim McCreadie of Watertown, N.Y., who led laps 2-3 and ran second for much of the distance in the Sweeteners Plus Rocket, and Shannon Babb of Moweaqua, Ill., in the Sheltra Construction Rocket.

Clanton, who started from the pole position with Richards alongside, wrestled the lead from McCreadie on lap four and built as much as a half-straightaway edge during the clean-and-all-green race. But Richards, who slipped as far back as fourth, found the extreme inside line to his liking after the halfway mark and steadily made his way toward Clanton.

Richards caught Clanton on lap 42 and assumed command the following circuit, seemingly putting him in position for his series-leading third victory of 2010. Clanton was almost ready to concede the race to his young rival.

"My car got to where it wouldn't steer a little in the middle of the corner, so I was having to hustle it," Clanton said. "I don't know if I sealed the right-front tire or something, but it was taking me the whole corner to steer in. When Josh got by me, he could get in the gas sooner and he just started driving away from us."

Opportunity presented itself to Clanton on the final lap, however, in the form of a pack of four slower cars running tightly in front of the leader. Richards, who had nearly a half-straightaway advantage over Clanton, momentarily came together with the machine driven by Ryan Unzicker of El Paso, Ill., on the inside of turn three and lost too much speed to stave off Clanton.

"It stopped his momentum just enough for me to catch up and pass him," Clanton said. "I seen him get in the gas and spin the tires hard off (turn) four, but I had a run and said, 'Just be smooth and don't spin the tires.' We just beat him to the line."

Richards was gracious in defeat. He interrupted the post-race ceremonies to congratulate Clanton on becoming the 10th different winner in 11 WoO races this season.

Clanton's victory, worth $10,575, also was his first since a winter hospital stay for treatment of a serious thumb infection.

"I didn't know how far ahead I was," said Richards. "I thought maybe I'd creep around the bottom underneath that 24 car (Unzicker) and clear him going down the backstraightaway, but I didn't get enough of a run and I slowed way up. Then he came down and we just got hooked. I was stopped almost before I could get going again.

"It was one of those deals. We had an awesome car and everyone did a great job, but we just weren't meant to win tonight."

Notes: Clanton's Rocket Chassis is sponsored by RSD Enterprises. ... Josh Richards's runner-up finish did move him back into a tie for the WoO points lead with McCreadie, who led the standings by just four markers entering the evening's program. ... Tim Fuller of Watertown, N.Y., charged from the 18th starting spot to place seventh. ... Austin Hubbard of Seaford, Del., ran as high as third before settling for seventh on a night run under brisk, chilly weather conditions. ... Among drivers failing to make the feature: Steve Sheppard Jr., Tim Lance, Tyler Reddick, Brad Neat, Brian Harris, Dan Schlieper, Kevin Weaver and Roger Brickler. ... WoO competitors will complete a weekend doubleheader Saturday at Bluegrass Speedway in Bardstown, Ky., with the $10,000-to-win My Old Kentucky Home Shootout.