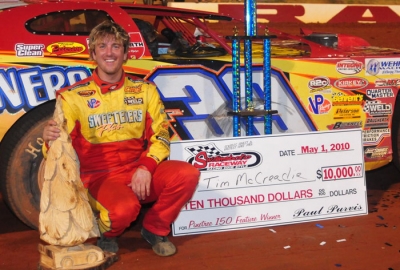 SWAINSBORO, Ga. (May 1) — It was finally Tim McCreadie's turn to celebrate in victory lane. Ratifying his return to championship contender status on the World of Outlaws Late Model Series, McCreadie scored his first tour win of 2010 by outdueling Darrell Lanigan on Saturday night at Swainsboro Raceway. | Slideshow | Video

McCreadie, 36, of Watertown, N.Y., started outside Lanigan on the front row and spent virtually the entire distance battling for the top spot with his fellow former WoO champion. Union, Ky.'s Lanigan grabbed the lead from McCreadie on lap 29, but McCreadie regained command on lap 40 and held on for dear life over the remaining circuits.

A regular on the WoO for the first time since capturing the tour's prestigious title in 2006, McCreadie drove his Sweeteners Plus Rocket car across the finish line 0.428 of a second ahead of Lanigan's Rocket mount. He became the ninth different winner in 10 tour events this season and moved into the points lead.

"It was my day I guess," said McCreadie, who earned $10,675 for his 13th career win on the WoO. "Darrell might have had the better car, but we got lucky enough to get to the lead and get a win."

Rookie of the Year contender Austin Hubbard of Seaford, Del., who started 12th, finished third in Dale Beitler's Rocket car, more than a second behind McCreadie. It was his second third-place finish in as many nights and fourth overall of 2010.

Defending champion Josh Richards of Shinnston, W.Va., saw his four-point lead in the WoO standings turn into a four-point deficit despite placing a solid fourth in his father Mark's Rocket house car, and 10th-starter Casey Roberts of Toccoa, Ga., made a late charge to record a career-best WoO finish of fifth.

Finally triumphant after knocking on the door several times this season, McCreadie was jubilant during the postrace ceremonies. He executed several celebratory 360-degree spins in turn four to rile the standing-room-only crowd. He pounded on his car's roof after climbing from the cockpit. And he kissed the unique keepsake he received for winning the WoO portion of the track's Pine Tree 100: a wooden replica of a pine tree sitting atop a dirt Late Model that was carved with a chainsaw the previous day by the Masters of the Chainsaw group, top sculptors who conducted an exhibition during the town of Swainsboro's annual Pine Tree Festival.

"It's a relief more than anything," said McCreadie, whose seven top-five finishes in the season's first nine races included a close second-place run to Richards on Friday at Fayetteville (N.C.) Motor Speedway. "I know everybody on this tour works hard, but we're working as hard as we can because I wanna win so bad. Maybe I shouldn't be this way, but (winning) rules my day and rules my night. If you don't win, (racing's) not as fun as it should be."

McCreadie appeared headed toward another disappointing, close-but-no-cigar night when, on lap 29, he relinquished the lead he had held the entire distance to Lanigan. But McCreadie was too hungry to give up and summoned enough speed to move back in front on lap 40.

"I didn't think we'd be able to win after Darrell went back by me," said McCreadie, whose first WoO victory since June 23, 2009, at Canandaigua (N.Y.) Speedway ironically tied him with Lanigan on the tour's win list since 2004. "When he got by me I was sort of fading, but then I saw where he was running and it helped me a little.

"I had to drive as hard as I could, but he left me a half a hole (on lap 40) and I kind of filled it up — maybe with a little bit of door, but like (Lanigan) said, he got into me earlier and he knew it was coming back."

Lanigan offered no excuses for falling short in his bid for a second WoO win in '10.

"He just got me getting into the corner," said Lanigan, who sits third in the standings behind McCreadie and Richards. "He was better on the top and I was better on the bottom, and I got a little high down there and let him get under me. It's my own fault."

Lanigan made several attempts to regain the lead from McCreadie, including a last-lap bid that saw the two drivers' cars make contact rounding turn four. McCreadie relished the close competition on the 3/8-mile, red-clay oval.

"It was a tough one," said McCreadie, who made his first-ever start at Swainsboro in what was the track's inaugural WoO program. "We raced hard and banged for the last 10 laps. We traded some paint, which was fun. It's cool — he can take it, I can take it.

"I told Darrell, 'I don't mind racing like that as long as we can have some fun and don't kill each other.' "

Four caution flags slowed the event, including three for WoO regulars. Shane Clanton of Locust Grove, Ga., was the first Outlaw to run into trouble when he pulled to a stop on the homestretch while battling for fourth on lap 14 because his car's hood flapped up to obstruct his view due to broken pins. Later, on lap 42, Brady Smith of Solon Springs, Wis., spun between turns three and four when he tangled with a lapped car while racing hard with Lanigan for second, and on the ensuing restart Clint Smith of Senoia, Ga., slowed because his car's left-rear wheel flew off.

Steve Francis of Ashland, Ky., settled for a sixth-place finish after being removed from the top five by Roberts with the checkered flag nearly in sight. Finishing in positions 7-10 was Dale McDowell of Rossville, Ga.; 20-year-old Chris Ferguson of Mt. Holly, N.C., who climbed as high as third before fading after a lap-14 restart; 15th-starter Chub Frank of Bear Lake, Pa., who lost eighth to Ferguson on the final lap; and Rick Eckert of York, Pa., who restarted at the rear of the field after pitting on lap seven to replace his car's lost air cleaner.

Next up for the series is a May 7-8 weekend at Lincoln (Ill.) Speedway and Bluegrass Speedway in Bardstown, Ky.