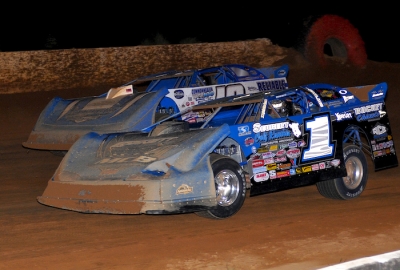 Richards, 22, of Shinnston, W.Va., overtook Steve Francis of Ashland, Ky., for the lead on lap 16 and was never headed, but he had to withstand a furious late-race challenge from Watertown, N.Y.'s McCreadie to secure the checkered flag. McCreadie's final-lap bid to steal his first win of 2010 in his Sweeteners Plus Rocket fell a mere 0.131 of a second — about a half car length — short at the finish line.

"That last straightaway seemed like it took forever," said Richards, whose triumph ended the WoO record streak of eight different winners to start the season. "I could see McCreadie alongside me and I was saying to myself, 'Just get to the finish!' "

Rookie of the Year contender Austin Hubbard of Seaford, Del., finished third in Dale Beitler's Rocket, snapping his three-race slump. He started eighth and reached second by lap 10, but he was overtaken by Richards following a lap-12 restart and spent the remainder of the distance watching the battle for the lead.

Darrell Lanigan of Union, Ky., rallied from the rear of the field to finish fourth after a flat left-front tire on his Rocket car forced him to relinquish the lead on lap four, and Rick Eckert of York, Pa., started and finished fifth after slipping as far back as eighth.

Richards won for the first time since capturing the WoO season opener on Feb. 11 at Volusia Speedway Park in Barberville, Fla. He also won that 50-lap event from a double-digit starting spot, coming from 17th to record a memorable victory.

A risky soft-compound Hoosier tire choice was Friday night's key move for Richards, who made the fateful decision with his team after watching Fayetteville's track crew rework the racing surface before the main event.

"We pulled out on the racetrack and I knew we gambled on tires," said Richards, who earned $10,600 for his 22nd career WoO win. "We ran a few laps and I was like, 'I don't know if they're gonna hold up or not,' so I charged to get by Francis (for the lead) so I could at least run where I needed to run."

Richards survived five of the race's seven caution flags after assuming command, but he experienced some anxious moments during the final circuits. McCreadie took second on lap 33 and applied some serious pressure to Richards in search of his first win of 2010.

"The last seven or eight laps (the car) was chattering (from worn tires) and I was holding on," said Richards, who entered the evening tied with McCreadie for the WoO points lead and left with a narrow four-point advantage. "I knew somebody had to be coming because I could see people giving hand signals, and I could hear (McCreadie) with a couple laps to go.

"Going down into (turn) three on the last lap I rolled in kind of high because I was gonna turn and come back low, then I saw (McCreadie) so I stayed in the gas and carried it out to the little bit of cushion there was. FortunatelyI was able to maintain to the checkered, but obviously, if there were a couple more laps, I was done. My tires were pretty much bald at the end."

McCreadie, 36, was disappointed to come so close to victory after starting 11th, but he was gracious in defeat.

"I had trouble getting wide into (turns) one and two," said McCreadie, who made his first-ever start at Fayetteville. "I would just shove a little bit, but finally, with two to go, I got in there the right way – and then the last lap, I got in as good as I could. But it was just a little rough through three and four, and you just can't go banzai-ing in through those holes and blade somebody out for the win.

"I know you could've just dropped in there wide-open, quarter-paneled him and won, but I don't usually like to race like that — and I know that when it comes around, it would be the same from Josh."

Several contenders ran into trouble during the event, starting with polesitter Earl Pearson Jr. of Jacksonville, Fla., who led laps 1-3 and was running fourth on lap 17 when he limped to the pit area with extensive left-front damage incurred from contact with another car after a caution flag flew. Later, on lap 33, Francis, who led laps 7-15, spun in turn four while racing side-by-side with McCreadie for second place, and during the ensuing caution period Shane Clanton of Locust Grove, Ga., headed pitside because a broken right-front ball-joint knocked him from fourth place.

Notes: Richards drives the Rocket Chassis house car with sponsorship from Seubert Calf Ranches. ... Chub Frank of Bear Lake, Pa., finished sixth after switching to a backup car just before the feature and starting near the tail. ... Jeff Smith of Dallas, N.C., who won last year's WoO event at Fayetteville, advanced from the 21st starting spot to finish seventh. ... Brent Robinson of Smithfield, Va., was eighth to earn a $500 bonus for the best-finishing driver who hadn't won on tour and wasn't ranked among the top 12 in points. ... The event was run in front of a big crowd under gorgeous weather conditions. Sunny skies and unseasonably warm spring temperatures in the high 80s dominated the afternoon, and shirt-sleeve weather continued into the evening. ... Brady Smith of Solon Springs, Wis., posted his third fastest qualifying time of the season. ... Among drivers failing to make the feature: Five-time Carolina Clash champ Ricky Weeks, Scott Shirey, Ray Tucker, Shawn Beasley, Craig Shuffield, Dean Bowen and John Blankenship. ... The two-race Southeast swing continues Saturday night at Swainsboro (Ga.) Raceway, which hosts the tour for the first time ever.