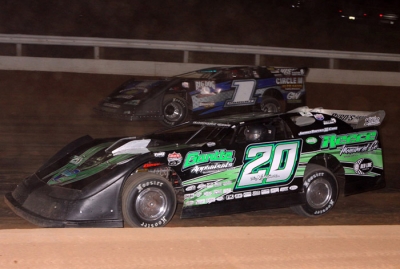 BEDFORD, Pa. (April 23) — In the past two Lucas Oil Late Model Dirt Series events, the tour visited one of its smallest tracks and one of its biggest tracks. Jimmy Owens of Newport, Tn., found both just the right size.

The 38-year-old driver from Newport, Tenn., on Friday night followed last month's victory at quarter-mile Brownstown (Ind.) Speedway with another dominating performance at 5/8-mile Bedford Speedway. The polesitting Owens slipped under Will Vaught of Crane, Mo., exiting turn four on the 13th lap and cruised the rest of the caution-free feature in the Bedford Valley Petroleum 50 to earn $10,000. | Video | Slideshow

On a track that forced most drivers to stick with the inside groove, Owens kept the field in check in racing to his 15th career series victory.

"I just kind of held my own there and ran some good smooth lines," Owens said. "Me and my guys have been doing some work, and have figured some things out with shock-springs combinations, and it's a little bit of everything. We've worked on our cars and I think we've come up with something. We're pretty good right now."

Third-starting Brian Birkhofer of Muscatine, Iowa, settled for second and his best finish overall of 2010 while Vaught, who started outside the front row, ended up third. Four-time series champion Earl Pearson Jr. of Jacksonville, Fla., was fourth and Jonathan Davenport of Blairsville, Ga., rounded out the top five.

Series points leader and reigning series champion Scott Bloomquist finished 11th and Owens cut his previous 90-point margin to five points. Bloomquist blew a tire as he took the checkered flag in what will be the only Lucas Oil event of the weekend following Saturday's rainout at Hagerstown (Md.) Speedway.

Vaught, making his first career visit to Bedford, jumped into the early lead over Owens and entered lapped traffic after 10 circuits. Vaught was trying to make an outside pass of a slower car exiting turn four when Owens found an opening to take command.

"We had a good car and I didn't want to show my cards too early on the bottom. Will had a good car, but it didn't look like he was able to stay as low as he needed to," Owens said. "Then he kind of slipped up a little bit and we were able to get around him."

Owens put his No. 20 on cruise control through the middle of the race while Birkhofer found a way past Vaught on lap 34. Birkhofer closed on Owens in the final laps but was already counting on his $5,000 payday for second.

"I just wanted to see if I had anything for Jimmy where I could just run with him — that way he couldn't think he just dominated," Birkhofer said. "But he did a heckuva job. I got outran by a very good racer, a very good time. We aren't too shabby ourselves, but the track conditions are what it was."

Vaught, running for the Lucas Oil rookie title, posted his best-ever series finish on a night when Bedford drew a track-record 66 Late Models.

"I put a little too soft left-rear tire on. We were good there early, and it just kind of bit us in the butt there at the end," Vaught said. Owens and Birkhofer are "the best ... to be able to race 'em and lead 'em there for a while, it's an accomplishment for how much work we've put into these Warrior Race Cars and all the help Dale McDowell's given to me."