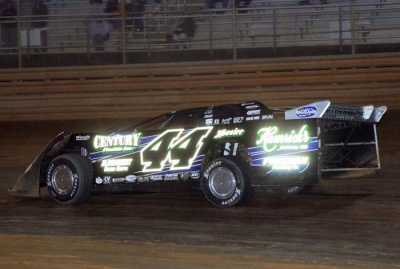 JAMAICA, Va. (April 17) — Chris Madden never had a tire choice pay off quite like he did on Saturday night at Virginia Motor Speedway. Bolting on hard-compound Hoosier rubber worked handsomely for Madden, who benefitted from the late-race tire problems of several rivals to capture the inaugural Commonwealth 100. | Slideshow | Video | Prelims

Madden, 34, of Gray Court, S.C., pocketed $25,000 for his sixth career victory on the World of Outlaws Late Model Series. It was his third win in as many appearances over the past three seasons at Bill Sawyer's pristine half-mile oval.

"I love this place," said Madden, whose perfect record at VMS includes a triumph in last year's WoO event. "I love the high speed. I love the configuration of the racetrack. It's got some character to it — it takes a different driving style just about every time you pull on the racetrack."

Madden used a cool, calm approach to win the biggest race ever run at VMS. He experienced some anxious moments early in the 100-lapper when his hard tires fired slowly and he slipped from his outside pole starting spot to nearly out of the top 10, but those same tires allowed him to outlast his competition on a track surface that produced heavy tire wear.

Over the final 19 laps Madden watched the four drivers ahead of him all succumb to flat right-rear tires, culminating on a lap-91 restart when long-time race leader Darrell Lanigan of Union, Ky., dropped off the pace. Madden inherited the top spot and held off fellow Team Zero by Bloomquist Chassis driver Jimmy Owens of Newport, Tenn., following a restart with two laps remaining to reach Victory Lane, where he was greeted with a flurry of revolver fire from a group of costumer Civil War reenactors.

Owens, who also opted to run hard-compound tires, settled for second place, just 0.192 of a second behind Madden at the finish line. Jonathan Davenport of Blairsville, Ga., finished third in the Barry Wright house car, followed by former WoO champion Steve Francis of Ashland, Ky., who started 14th in his Valvoline Rocket, and 21st-starter Shane Clanton of Locust Grove, Ga., in the RSD Enterprises Rocket.

"I was worried at the beginning because we fell so far back," said Madden, who sat ninth when the first of the race's 12 caution flags came out on lap 16. "It's a little nerve-racking when you're going backwards. It's hard to sit in that seat and say, 'Well, just hang on, hang on, hang on, it'll be O.K.' But I did, I kept my patience, I didn't get in trouble, and it paid off at the end.

"Me and my guys decided that if we could be in the top five on lap 50, we had a shot at winning the race. At lap 50 we were right there (in seventh place) being very competitive. We knew we had a great car, so I was just trying to keep the tires on the car and be there at 100 laps."

After Earl Pearson Jr. of Jacksonville, Fla., signaled that tire wear would be an issue when he relinquished third place to a soft right-rear tire on lap 59, Madden overtook Jason Covert of York Haven, Pa., for fifth on the ensuing restart. Madden then ascended to the front without having to pass a single car, picking up positions thanks to the flat right-rear tires suffered by Brian Birkhofer of Muscatine, Iowa (lap 85), Josh Richards of Shinnston, W.Va. (lap 87) and Jimmy Mars of Menomonie, Wis. (lap 91) — each of whom was running second when they were forced pitside — and, finally, Lanigan.

"I looked at (Mars's) tires (during a caution period) and he had cords hanging out," said Madden, who became the eighth different winner in as many WoO A-Mains this season. "I knew those guys were gonna pop. I was a little concerned about Lanigan because he was out front leading and was able to set the pace and keep his car good and straight, but with 10 to go we were right behind him and I didn't really have nothing to worry about. My car was great."

The 38-year-old Owens, meanwhile, followed the same path as Madden en route to a runner-up finish worth $12,500. He started 11th and faded early in the race before advancing as his hard tires heated up, ultimately reaching second place on lap 97 when he overtook Tim McCreadie of Watertown, N.Y. That pass came moments before the race's final caution flag flew on lap 98 for fourth-place Covert's flat tire and McCreadie gave up third place during the caution period to replace his machine's popped right-rear.

"We took a gamble on tires," Owens said of his hard-compound choice. "At first I was really worried because we went straight back, but then I thought, 'You know, we'll just use our head and stay calm because I believe it's gonna be survival of the fittest.'

"There toward the end we had a lot more tire left than everybody, but we were just a little bit short. Congratulations to Chris — he had had a great car and a good run."

Davenport, 26, passed Francis on the race's final restart to finish a WoO career-best third. He felt fortunate to stand on the podium after struggling for much of the distance — he started ninth but faded backward and made a mid-race pit stop — and spinning around on the backstretch on lap 92 during a scramble to avoid Bub McCool of Vicksburg, Miss., who slowed with a flat tire.

"We probably had a 20th- to 25th-place car," said Davenport, who wasn't required to restart at the rear of the field following his spin because the caution flag was charged to McCool. "I just kinda managed my tires and I found that top there at the end (to pick up spots)."

Finishing in positions 6-10 was 22nd-starting Vic Coffey of Caledonia, N.Y.; 16th-starting Dan Schlieper of Sullivan, Wis., who pitted during a lap-81 caution period; Tim Fuller of Watertown, N.Y., who used a provisional and started 25th after a consolation race tangle forced him to jump in his backup car; Steve Shaver of Vienna, W.Va., who slowed with a right-rear flat tire on lap 81; and 26th-starter Clint Smith of Senoia, Ga., who pitted to preemptively change a tire during a lap-59 caution period.

Richards finished 12th, Lanigan settled for 14th and McCreadie placed 17th, tightening the WoO LMS points standings after the eighth event of 2010. Richards and McCreadie left the track tied for the points lead, with Lanigan trailing in third place by 42 points.

In the night's race for non-qualifiers, Chris Ferguson of Mount Holly, N.C., marched forward from the eighth starting for a $3,000 victory. The young driver grabbed the lead from Dan Stone of Thompson, Pa., on lap 10 and never looked back.

The WoO will be idle next weekend before heading to the Southeast for a doubleheader, visiting Fayetteville (N.C.) Motor Speedway on April 30 and Swainsboro (Ga.) Raceway on May 1.