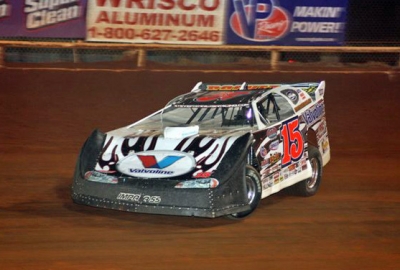 KILGORE, Texas (March 27) — With a little help from a friend, Steve Francis busted out of an early-season funk in Saturday night's 50-lap World of Outlaws Late Model Series event at Lone Star Speedway. Some helpful hints from fellow former series champion Darrell Lanigan put Francis back on track and propelled him to his first victory of 2010 on the national tour. | Slideshow

"I gotta give Darrell Lanigan a lot of credit," Francis said after roaring off the pole position to lead from start-to-finish in the first WoO event since 2004 at the east Texas half-mile oval. "We just couldn't figure out what was going on with our cars, and Darrell was good enough to work with us and share some information. He actually gave me some shock measurements from his car and we used them on ours tonight — and just like that, it drove like my cars always have for years.

"Finally, after struggling so much this year, my car drove around the track like it's supposed to. It's all thanks to Darrell's help, so hopefully I'll be able to return the favor sometime in the future."

Mired in eighth in the WoO points standings with just one top-five finish through the tour's first five events of '10, Francis, 42, of Ashland, Ky., needed a pick-me-up for his self-owned team and got it. He survived one hairy moment in lapped traffic and turned back challenges from defending champion and current points leader Josh Richards of Shinnston, W.Va., and Clint Smith of Senoia, Ga., to register his 27th career win on the tour, more than any other driver since 2004.

Smith, 45, slipped by Richards for second place on a lap-14 restart and stayed there to the checkered flag, securing his best finish of 2010 in his Rocket machine. He finished 2.781 seconds behind Francis.

Richards settled for third place in his father Mark's Rocket Chassis house car after holding off repeated challenges from Tim McCreadie of Watertown, N.Y., over the race's late stages. McCreadie, who started third, finished fourth in the Sweeteners Plus Rocket — and left Texas trailing Richards by a mere four points in the WoO standings — while Lanigan placed fifth in his Rocket mount after starting seventh.

Francis, who is back campaigning his own equipment this season after driving for Maryland car owner Dale Beitler in 2008-2009, nearly saw his hold on the top spot evaporate on lap 13 when he slid completely sideways between turns one and two while negotiating slower traffic. Richards was able to erase his half-straightaway deficit to Francis as the leader fought to regain his momentum.

But while Richards pulled to the inside of Francis rounding turns three and four, Francis managed to remain in front. A caution flag on lap 14 for the stopped car driven by Brady Smith of Solon Springs, Wis., gave Francis a chance to catch his breath and he never wavered over the remaining distance.

"That was a close call," said Francis, who earned $10,600. "I ran in there and slid the one lapped car and then the other lapped car checked up. I was just carrying too much speed at that point and the hole closed. It turned me sideways, and luckily we were able to hold on."

Smith, winless on the tour since June 2008, kept Francis honest when he drew within a couple car lengths midway through the race. But the veteran driver gradually lost contact with Francis during the race's second half, which ran caution-free.

"I think I had something for Francis if I knew I had that much tire left," said Smith, motioning toward the Hoosier rubber on his car's right-rear corner. "I went a little softer (on tire compound choice) than everybody and that had me a little concerned. About halfway through I was running a little bit different line and I could get up on (Francis), but then I thought my tire was gonna blow so I backed up off it."

Just three caution flags slowed the event, including the aborted original start for a turn-two spin by Brian Birkhofer of Muscatine, Iowa. Brady Smith headed to the pit area for front-end service by his pit crew after stopping on lap 14, and Gary Christian, a 16-year-old from Broken Bow, Okla., executed a spin in turn two on lap 25 in his WoO debut.

Finishing in positions 6-10 was Tim Fuller of Watertown, N.Y., who started eighth; Shane Clanton of Locust Grove, Ga., who slipped backward from the sixth starting slot; Chub Frank of Bear Lake, Pa.; Billy Moyer of Batesville, Ark.; and Rick Eckert of York, Pa., who started fifth but was never a factor one night after winning his first WoO race of 2010 at Battleground Speedway in Highlands, Texas.

The series will be idle over Easter before resuming competition with the third annual Illini 100 on April 9-10 at Farmer City (Ill.) Raceway.