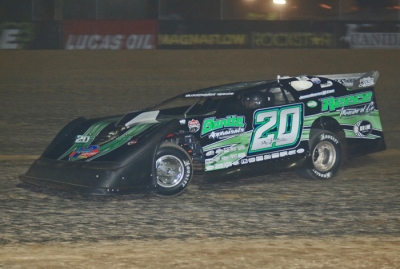 BROWNSTOWN, Ind. (March 27) — Everyone knew they were chasing polesitter Jimmy Owens on Saturday night at Brownstown Speedway's Indiana Icebreaker, but for much of the 50-lapper, they didn't know exactly where he was.

That's because the 38-year-old driver from Newport, Tenn., was building half-track leads in his dominating performance as he routed the Lucas Oil Late Model Dirt Series field in front of an enormous crowd on a pleasant spring evening at the quarter-mile southern Indiana oval. | Bart Hartman sidebar | Postrace notebook | Slideshow

"Jimmy was gone," said runner-up Earl Pearson Jr. "I don't even know where he went."

"We weren't even in the same category as Jimmy," said fourth-place finisher Bart Hartman.

Owens was never challenged in capturing his first career Late Model victory at Brownstown and earning $10,000 in one of the season's first major Midwestern specials that drew 61 Late Models. Cool and damp spring weather forced drivers to face choppy track conditions, but the No. 20 of Owens maneuvered to victory.

"I didn't even have to touch the thing all night. It was just great out of the box, and we were able to capitalize on it," Owens said. "You've got the best in the country behind you and around you. We're not normally that good on a heavy track like that, or a rough track. We've gotta a new motor and all that stuff and we were trying some things, and it just paid off. The car was really great."

Owens built a straightaway lead before the race's lone caution on lap 7, was out to a straightaway again after 10 laps and by lap 40 had a half-track margin on the field as he cruised to his 14th career series victory.

Pearson, the four-time series champion from Jacksonville, Fla., who raced just a week after surgery to remove his gallbladder, was gunning for his third straight Lucas Oil victory at Brownstown. Pearson fell one position — and half a track — short after taking the second spot from series points leader Scott Bloomquist of Mooresburg, Tenn., with six laps remaining.

Bloomquist settled for third while the fourth-starting Hartman of Zanesville, Ohio, was fourth in his first outing in more than five months.

Former track champion Don O'Neal of Martinsville, Ind., who started 10th but lost several positions when he was bumped from behind early in the 50-lapper, rallied to finish fifth.

On a night when drivers and crew members anxiously checked competitors' tires — more so than usual in a sport where peeking at rubber is common — Owens said his tires were key to helping him to victory lane.

The fifth-starting Bloomquist got up to second on the lap-seven restart, but he soon realized his harder tire compound wasn't going to be enough against Owens.

"We gambled a little bit. We were the best finishing car on hard tires tonight, and we'll take third and keep on getting it," said Bloomquist, who held second most of the race before losing momentum exiting turn two on lap 44. "(Pearson) was a little bit better really low on the racetrack. Again, as low as he was, the softer tires definitely were better down there. We tried to get down there and we just weren't quite as good."

Pearson, who won last year's Indiana Icebreaker and Jackson 100 at Brownstown, gained a little on Owens late in the race, but he was still far behind the winner.

"This is what we needed for our points deal," Pearson said. "Scott was kind of running in the middle of the racetrack, and I knew I had an opportunity to get by him in traffic. He got bottled up with them guys and we were riding around in the bottom, trying to stay out of the holes.

"The track was a little rough in one and two. It was kind of hard to get through there. But Jimmy could get through those holes and keep right on going."

Owens entered the event with a pair of modified victories at Brownstown, but he'd never mastered the historic oval in a Late Model."

"To be able to come here and win, I mean, O'Neal runs great here, Scott runs great, Shannon Babb and Earl, heck he's won the last three of four. To come down here, it feels good to get a win."

Notes: Owens drives a Bloomquist Race Car with Cornett powerplant and sponsorship from Reece Monument and Gantte Appraisals. ... The lone caution appeared on the seventh lap exiting turn two when Dale McDowell got sideways in a tangle that also involved John Blankenship, Brad Neat and Eric Wells. ... Neat was initially listed 23rd in the rundown, but a check of scoring moved him to 11th. ... Dustin Neat held a transfer spot in the fourth heat when his turn-four 360 dropped him from contention. ... The sixth heat was barnburner between Greg Johnson and Eddie Carrier Jr., with Carrier nipping Johnson by nine-thousandths of a second. .... Among drivers failing to make the main event: Scott James (in his second outing in Scotty Earl's No. s44), Jeep Van Wormer, Ryan Unzicker, Bub McCool (making his first visit to Brownstown since '96), Tim Dohm, Eric Jacobsen, Doug Dodd and former track champions Mike Jewell and Marty O'Neal. ... Lucas Oil competitors take a four-week break before returning to action April 23-24 at Bedford (Pa.) Speedway and Hagerstown (Md.) Speedway for a pair of $10,000-to-win events.