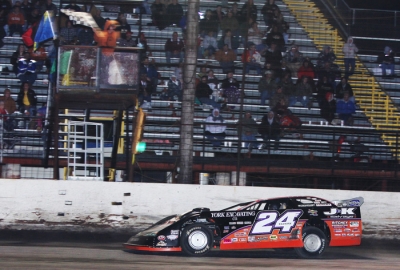 HIGHLANDS, Texas (March 26) — Rick Eckert found the smoothest path to victory lane on Friday night at Battleground Speedway. And with that came a coveted postrace visit with Hondo.

Eckert, 44, of York, Pa., turned back all challengers to score a flag-to-flag triumph in the World of Outlaws Late Model Series Lone Star 50, earning himself a photo opportunity atop a 1,300-pound Texas Longhorn. | Jill George's accident | Slideshow

"I've never even rode a horse, so that thing's big for me," Eckert said after climbing on Hondo's ample back to celebrate his first WoO victory of 2010. "I'm not really the farmer type, and that thing was huge. Those horns are probably 4-foot apiece so it was a little scary, but I'm happy to get up on him after a win."

Eckert was virtually flawless in the second annual WoO event at the 4/10-mile oval outside Houston, leading the 50-lapper from start-to-finish after taking the green flag from the outside pole. But he was threatened several times by Tim Fuller of Watertown, N.Y., and had to survive seven caution flags in the hardscrabble race, adding a hefty degree of difficulty to his performance in his Bloomquist Race Car sponsored by York Excavating and J&K Salvage.

Eckert finally gained some breathing room following the race's final restart on lap 37, pulling away to cross the finish line 3.540 seconds ahead of Union, Ky.'s Darrell Lanigan. Lanigan, who started fourth, never got a sniff of Eckert's exhaust, reaching second place only on lap 48 when he steered his Rocket car by Austin Hubbard of Seaford, Del.

The 18-year-old Hubbard settled for third place, giving the 2010 Rookie of the Year contender three consecutive top-three finishes in Dale Beitler's Rocket No. 19. Fuller, who started from the pole position, slipped to fourth in the finishing order after his Gypsum Express Rocket was slowed late in the distance by a deflating right-front tire, and three-time WoO champion Billy Moyer of Batesville, Ark., advanced from the 19th starting spot to complete the top five in his Victory Circle machine.

Racing out front was key for Eckert, who used much of the wide racing surface to find the best route around the choppy clay.

"Getting the lead was beneficial to the line I ran through (turns) one and two," said Eckert, whose car was powered by a Jay Dickens engine. "I ran an unorthodox line, but it worked for me. I turned early on the straightaway and went straight across the apex through the holes, and then turned after the holes so I could exit. I made a lot of time through one and two staying off that bottom."

Lanigan, 39, didn't feel like he had anything for Eckert, who became the fifth different winner in five WoO events.

"We had a good car," said Lanigan, who registered his third straight top-five finish. "But (Eckert's) car was a lot more stable. We were just way too tight."

"I think Eckert definitely had it going on — nobody had much for him," said Hubbard, who reached second place following the lap-37 restart. "I made a couple mistakes at the end, and a couple at the beginning, and a couple in the middle, but I think we had a good run and I'm happy with it."

Despite the rash of seven caution flags between laps 15 and 37, only one was triggered by a multi-car incident. That came on lap 21 when Chub Frank of Bear Lake, Pa., Keith Foss of Winona, Minn., and April Farmer of Livingston, Tenn., tangled in turn four.

Tim McCreadie of Watertown, N.Y., finished sixth after Moyer, who failed to qualify through a heat after losing four spots when he half-spun through the infield while leading, knocked him from the top five on lap 40, and Brian Birkhofer of Muscatine, Iowa, was seventh after starting 17th.

Defending WoO champion and current points leader Josh Richards of Shinnston, W.Va., finished eighth after running as high as fourth. He was blessed with good luck on lap 36 when the caution flag for Knowles's woes flew seconds before Richards spun off turn two, allowing Richards to remain in his running position.

The night's prelims were marred by a wild time-trialing accident involving WoO Rookie of the Year candidate Jill George of Cedar Falls, Iowa, whose car slammed the outside wall in turn three on her second lap due to an apparent loss of brakes and then flipped into the catch fence. Her machine came to rest tangled in the fencing, hanging precariously on its side above the guardrail.

George was able to climb out of the car and walk to the ambulance, but she was transported to a local hospital for treatment of a deep cut on her left elbow and possible other arm injuries.

The series completes its Texas weekend with a Saturday night event at Lone Star Speedway in Kilgore. The 10,000-to-win event is the first WoO visit to the half-mile oval since 2004.