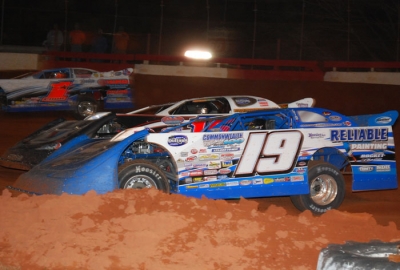 SYLVANIA, Ga. (March 20) — Austin Hubbard loves Georgia – and Georgia loves him back. Back in the state where he burst on the national scene with his first major victory two months ago, the 18-year-old sensation from Seaford, Del., thrilled his growing Peach State fan base again by winning his first career World of Outlaws Late Model Series event Saturday at Screven Motor Speedway. | Slideshow

Hubbard passed 2007 WoO champion Steve Francis of Ashland, Ky., for the lead on lap 30 and repelled a late challenge from defending tour champ Josh Richards of Shinnston, W.Va., to emerge triumphant in the 50-lap event. Then he reached victory lane and upped the ante on the wild, clothes-shedding postrace celebration he performed after his Southern All Star victory Jan. 30 at Golden Isles Speedway in Brunswick, Ga.

With the standing-room-only crowd cheering him on, Hubbard climbed out of his Beitler Motorsports Rocket car, removed his shoes, uniform and fireproof top, and ran down the homestretch wearing only his helmet and long underwear a la Ricky Bobby in Talladega Nights. He even added new wrinkles to his performance, rolling several times in the mud and high-fiving fans who stuck their hands through the catch fence.

"It's a dream come true," said Hubbard, who became the fourth driver in WoO history to win while chasing the Rookie of the Year title. "I'm just glad to be racing with these people. I'm just a country boy from Delaware, and this is all I've wanted to do since I was a little kid. It's so great that we finally made it. I won a World of Outlaws race and I couldn't be more excited."

Hubbard crossed the finish line 0.925 of a second ahead of the 21-year-old Richards, who was unable to take advantage of a final restart on lap 47 to steal the race from the rising young star following in his WoO tire tracks. Richards, who started sixth in his father's Rocket Chassis house car, chased Hubbard for the final 19 laps en route to padding his points lead after four events.

"He did a heck of a job," Richards said of Hubbard. "I knew that he was gonna be competitive in that car this year: he has good equipment, he has Robby Allen as a crew chief and he's an awesome driver, so I'm not surprised he's doing what he's doing.

"I was glad to be there for his first win at Brunswick, and to run second to him in his first Outlaw win means a lot to me."

Darrell Lanigan of Union, Ky., advanced from the 11th starting spot to finish third in his Rocket mount, backing up his first win of 2010 earned the previous evening at Ocala (Fla.) Speedway. Fifth-starter Tim McCreadie of Watertown, N.Y., placed fourth in the Sweeteners Plus Rocket — matching Richards with his fourth top-five finish in as many events this season — and outside polesitter Tim Fuller of Watertown, N.Y., finished fifth after slipping as far back as eighth midway through the race.

Hubbard, who started third, slid into second place on lap 10 when he passed Ivedent Lloyd Jr. of Ocala, Fla. He ran down Francis, who started from the pole position, and was in the process of overtaking the 42-year-old veteran for the top spot when Russell King of Bristolville, Ohio, spun in front of the leaders to bring out a caution flag on lap 26.

Francis, who ironically preceded Hubbard as the driver of Dale Beitler's familiar No. 19, proved to be no match for the teenager after the restart. Hubbard sailed underneath Francis off turn two and assumed command for good as lap 30 was scored.

"The car was just great tonight," said Hubbard, hailing his car owner and chief mechanic Robby Allen. "Francis, he just couldn't quite keep it down off two. He left me about a car length down there so I could get under him.

"We could just get through one and two so well once I found that outside. When I did, I was like, 'All right, now we're in business.' I felt like I had one of the best cars I've ever had under me."

Hubbard earned $10,750 for his victory, which moved him to fifth in the WoO points standings. He scored three top-five finishes last year and one just one day removed from his career-best run on the tour, a third-place finish at Ocala Speedway.