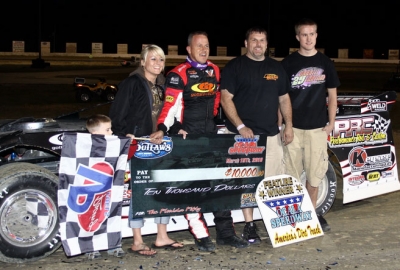 "That was pretty exciting," said Lanigan, who wasn't headed after grabbing the lead on lap three but never got far enough ahead to relax. "This is a real tricky racetrack, so all it took was one mistake and somebody was gonna pass you. Luckily we were just able to hold on."

McCreadie, 35, settled for second place in the Sweeteners Plus Rocket, finishing 1.893 seconds behind Lanigan. The 18-year-old Hubbard placed third in Dale Beitler's Rocket — his career-best finish in World of Outlaws action — followed by defending WoO champion Josh Richards of Shinnston, W.Va., in the Rocket Chassis house car and 13th-starter Chub Frank of Bear Lake, Pa., in his self-owned Rocket mount.

Lanigan, who started third, overtook hometown favorite Ivedent Lloyd of Ocala, Fla., for the lead heading down the backstretch of the egg-shaped track on lap three. He spent the rest of the race waiting for drivers to come knocking on his door.

"I kept looking on the board and there was somebody different behind me every lap," said Lanigan, who registered his first victory on the WoO since July 14, 2009, at Gillette (Wyo.) Thunder Speedway. "I was like, 'What's going on back there?' All I could do was run as hard as I could and try to stay in front."

Hubbard was the first to threaten Lanigan, sailing around the outside of Richards to steal second on a lap-18 restart and almost immediately catching the leader. The teenager drove to the outside of Lanigan on the backstretch working lap 22 and appeared ready to take the lead, but he slipped high rounding turn four and lost second to McCreadie moments later.

"We had the lead for about point-four seconds," said Hubbard, who started sixth. "I just completely drove into three and four too deep. I was a little overzealous."

McCreadie took up the chase of Lanigan and slipped inside Lanigan several times, including one bid while working lapped traffic between turns one and two on lap 45. But Lanigan had sufficient speed running the top lane to turn back the challenge.

"I think we were a little softer than everybody else on tires and I was pretty dead there on the bottom," Lanigan said. "So I moved up (on the track), found a momentum line and stayed out front. I don't even remember seeing (McCreadie) inside me."

McCreadie settled for his third top-five finish in as many WoO events this season, moving him to second in the points standings, just two points behind Richards.

"I pushed the right-front (tire) off," said McCreadie, who started second but slipped back to fourth early in the event. "As it got hot (the car) just wouldn't steer down there on the bottom, so it would push real bad and I'd have to drive across the track. That's what happened when I got under Darrell — I just slowed down too much and lost too much ground."

Tim Fuller of Watertown, N.Y., came on late in the distance to finish sixth after starting 17th. Young Tyler Ivey of Tallahassee, Fla., started and finished seventh to earn a $500 bonus for the top finisher who hasn't won a WoO event.

Lloyd led laps 1-2 but gradually faded and settled for eighth, ahead of Brady Smith of Solon Springs, Wis., who relinquished the WoO points lead, and Shane Clanton of Locust Grove, Ga., who made his first competitive run of the season after a thumb infection forced him to merely take the green flag and park his car in last month's first two events of 2010.

Four caution flags slowed the race — two for slow cars (14-year-old Christian Augspurger of Palm Beach Gardens, Fla., on lap 18 and Justin Tilton of Dunnellon, Fla., on lap 26) and two for incidents (a turn-four tangle involving Tilton and Jill George of Cedar Falls, Iowa, on lap five and a crash that eliminated Jordan Bland of Campbellsville, Ky., on lap 32).