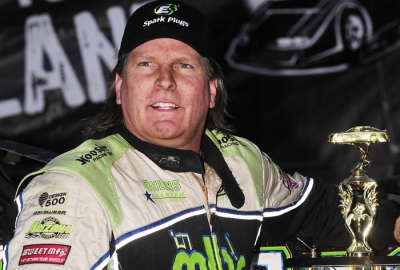 GAFFNEY, S.C. (March 7) — Scott Bloomquist's car got better and better throughout the 50-lap March Madness VIII main event at Cherokee Speedway, and it reached best in the nick of time. The reigning Lucas Oil Late Model Dirt Series overtook Dale McDowell of Rossville, Ga., on the final lap for a $10,000 victory, the series-leading 20th of the Mooresburg, Tenn., driver's career and third of the brief season. | Slideshow

McDowell, who swapped the lead with Chris Madden of Gray Court, S.C., three times over the first 49 laps, was out front at the white flag, but the seventh-starting Bloomquist pulled even down the backstretch, slipped underneath McDowell in turns three and four and won a drag race to the checkers at the 4/10-mile oval oval in Upstate South Carolina.

"Dale and I had a great race. We raced each other clean," Bloomquist said in victory lane following the afternoon affair. "Before that last caution (on lap 46), I was catching them and I didn't know if the caution was good or bad for us, the car just fired up real good on the restart.

"This racetrack was real good today, everybody was giving each other room, there was some good racing going on out there. Dale and I have raced together several times in the past and it was going to be tough to get around him."

McDowell, gunning for his first series victory since the Fourth of July, settled for a disappointing second with Randy Weaver of Crossville, Tenn., in third. Don O'Neal of Martinsville, Ind., who started 16th, rallied to finish fourth and Madden rounded out the top five.

Madden took the lead at the outset with the sixth-starting McDowell quickly up to second. McDowell pulled ahead on the 11th lap with fast qualifier Chris Wall of Holden, La., in third in his Cherokee debut.

After a lap-12 caution for a slowing Bub McCool, Madden stayed with McDowell while Wall, Bloomquist and the 12th-starting Weaver all were in the hunt.

McDowell was in control at halfway, but Madden pulled even on lap 28, then took command on lap 29, edging out to a five-length lead as the race entered the final 20 laps. McDowell didn't give up, though, working back underneath Madden and lap 42 and edging away while Bloomquist and Weaver couldn't quite stay in touch with the leaders.

But Bloomquist took second from Madden on lap 45, and a lap-46 caution for Casey Roberts bunched the field, setting up a four-lap shootout.

McDowell appeared to have enough to hold off Bloomquist's final charge until they exited turn two on the final lap and Bloomquist began the winning pass.

Notes: Bloomquist's self-designed car has a Jay Dickens Racing Engine and sponsorship from Miller Bros. Construction, Hawkeye Trucking, Sweet Mfg. and Lane Automotive ... Bloomquist's previous 2010 victories came at East Bay Raceway Park near Tampa, Fla., in early February. ... Ray Cook, the previous night's winner at Volunteer Speedway in Bulls Gap, Tenn., started with a provisional but ran into trouble early in tangling with Bub McCool on the backstretch on the first lap; he fell several laps behind as his crew made repairs and ended up 25th in the 26-car field. .... Outside front-row starter Dan Schlieper of Sullivan, Wis., began leaking fluid from his car during the red-flag cleanup for the McCool-Cook wreck and fell out of the race, putting Madden in the front row. ... Michael Walker of Franklin, Tenn., ended up on his lid in preliminaries but wasn't injured. ... Next up for Lucas Oil competitors is the March 27 Indiana Icebreaker, a $10,000-to-win event at Brownstown (Ind.) Speedway.