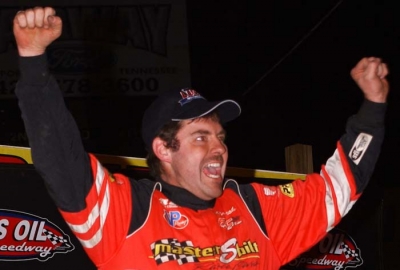 Cook held off Madden the rest of the way to secure his seventh career series victory and first of the season. Madden, who started outside the front row, finished second followed by polesitter Skip Arp of Georgetown, Tenn., Dan Schlieper of Sullivan, Wis., and Steve Casebolt of Richmond, Ind.

Cook's victory in the first Lucas Oil event since Florida Speedweeks moves him into a tie for the points lead with reigning series champion Scott Bloomquist of Mooresburg, Tenn., who finished sixth.

"As far as the points are concerned, we are taking them week to week," Cook said. "You never know what could happen tomorrow you might fall out of a race and drop back in points

"We've got an awesome race team, car, engine, tires, shocks, I mean the whole thing is just clicking right now. I'm just real fortunate just to be able to drive the car. It's fun when you are running this well, you just have to enjoy it while you can, cause it could change the next race."

A slowing Mike Marlar brought out a lap-20 caution, but not before Cook took the second spot from Arp. Just two more laps clicked off before the second and final caution appeared for John Blankenship, and Cook stayed right with Madden on the restart.

Madden stayed in command at the halfway point with the top seven all running on the same straightaway, and Cook drove low in the corners, peeking under Madden. Cook made the pass stick on lap 36 but faced traffic that made life tough on the frontrunners.

Cook changed grooves several times in fighting off Madden's challenges, keeping Madden at bay the final 10 laps for the victory, his first-ever at Bulls Gap.