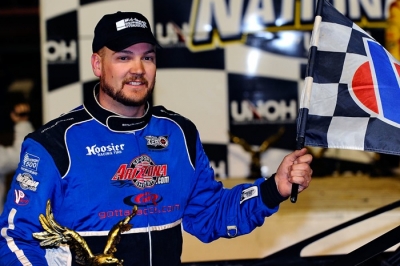 Winless in 2009 during his first season as a WoO regular, Smith broke through with a dominant performance in front of a chilled Sunshine State crowd. He fell to third place early in the distance after starting from the pole position but rallied to pass Billy Moyer of Batesville, Ark., for the lead on lap 20 and run then run away from the pack.

"It feels great to finally win an Outlaw race again," said Smith, whose two previous WoO triumphs came during the 2008 season. "It's so hard to win these races. I know we're capable of doing it, but we raced the whole season last year and didn't get it done, so to be able to do it here at Speedweeks — man, it's actually harder to win a race down here than it is all season.

"We're just really thrilled. This gives everyone a boost — me, the crew, the sponsors, and definitely my bank account.

Smith crossed the finish line with a winning margin of 2.456 seconds over Earl Pearson of Jacksonville, Fla. Pearson was unable to challenge Smith following a lap-37 restart, leaving him with a runner-up finish in both WoO events run during the DIRTcar Nationals by UNOH.

Tim McCreadie of Watertown, N.Y., registered a hard-earned third-place finish, charging forward from the 28th starting position. Behind the wheel of his backup car after driveline woes sidelined his primary machine during heat action, he made the feature through a provisional spot granted to the highest-ranked non-qualified driver in the DIRTcar Nationals points standings.

Smith, 32, left Volusia as the WoO points leader for the first time in his career, a far cry from the 2009 season, when he failed to qualify for the tour's season-opening event and needed a second-place finish in the DIRTcar Nationals finale just to crack the top 20 in the points standings exiting Florida.

The $10,125 victory didn't come easily despite Smith's pole starting spot. He was outgunned for the lead at the initial green flag by Moyer, who started second, and lost second to Richards on lap two.

"I had a plan there before the feature and it was to run the bottom," said Smith, who finished eighth in the 2009 WoO points standings. "I took off and beat (Moyer) to the flagstand, but he wheeled around me pretty good (for the lead) and then even Josh got by me before that caution came out (on lap three).

"I just said, 'Man, this is ridiculous. I gotta get up on the wheel here.' So that's what I did. Once I moved up the racetrack to Moyers groove, I instantly knew I had a car to race with."

Smith regained second from Richards on the restart. By lap 15 he was on Moyer's rear bumper, bidding for the lead.

"I used some patience and raced with (Moyer) a little bit," said Smith. "Then I saw an opening there through (turns) one and two between him and a lapped car (on lap 20), so I just hit the gas and took it. The car stuck and didn't miss a beat the rest of the race."

Pearson slid past Moyer for second on the restart following the race's second and final caution flag, on lap 37, but he never got close to Smith. The home-state driver spent the race's late stages fending off McCreadie, who made a stirring come-from-behind drive.

After falling short to Richards in the WoO lidlifter on Thursday night, Pearson found himself upstaged again.

"The other night there was a mud ring around the bottom and Josh beat us on tires," said Pearson, who started fourth. "Tonight we all pretty much had the same tires on and the track was real racy, but I was just a little bit too tight through the center to run with Brady."

McCreadie, meanwhile, had to catch his breath after driving his heart out to salvage a third-place finish. Sitting fourth for the lap-37 restart, he nearly pulled off a three-wide move inside Moyer and Pearson to grab second when the green flag flew but instead settled into third and stayed there to the finish.

"I was a little softer on tires than those guys," said McCreadie, the 2006 WoO champion. "I think if I would've had an earlier restart it would've helped, but we got where we got. I just couldn't clear Earl to even think about trying to run down Brady."

There were no serious incidents, which was slowed only on lap three for the stopped car driven by Steve Francis of Ashland, Ky., and on lap 37 for a turn-four spin by Tim Dohm of Cross Lanes, W.Va.

Francis pulled up lame in turn two when his Valvoline No. 15 was felled by a busted oil-pump belt. He finished 28th, leaving him mired in 15th in the points standings. — Kevin Kovac

In a redraw among heat winners, Brady Smith is on the pole for the 50-lap main event with Billy Moyer alongside. Josh Richards, Earl Pearson Jr., Jimmy Owens and Steve Francis fill spots in the second and third rows. Provisional starters based on last year's WoO points are Darrell Lanigan and Tim Fuller. Jason Feger receives a provisional based on '09 UMP points and Tim McCreadie starts as the top DIRTcar Nationals driver not already in the field. Emergency WoO provisionals went to Russ King and the ailing Shane Clanton, who is piloting the Tony Knowles No. 26 and is expected to take a single lap and pull off.

Polesitter Brian Birkhofer overtook race-long leader and front-row starter Chris Madden with an inside pass in turn four on the fifth lap and led the rest of the way. Madden tried to fight back in the high side, but settled for the second and final transfer spot, far ahead of third-finishing Brandon Kinzer. Ricky Weiss was fourth in the caution-free race, the final consy of the night.

Polesitter Jared Landers raced to victory while outside front-row starter Austin Hubbard wrapped up the second and final transfer spot. Randy Korte was a distant third in the caution-free race.

Polesitter Eddie Carrier Jr. led all 12 laps to earn a transfer spot to the main event. The battle for second was a tight one most of the way between Dan Schlieper and Darrell Lanigan, but the fifth-starting Lanigan couldn't find a way past and will be forced to take a WoO provisional. Darren Peters spun in turn four for a lap-three caution, and another yellow appeared when Jason Feger slowed on lap nine. Tim McCreadie, who had to start on the tail after switching to a backup car, took a few laps and pulled in; he should get a DIRTcar Nationals provisional.

Polesitter Billy Moyer led fellow front-row starter Rick Eckert all the way in the final heat. Fourth-starting Justin Rattliff finished further back in the third and final transfer spot while Chris Madden, who tried to make the high side work, was fourth after getting around Ricky Weiss in the caution-free prelim.

Outside front-row starter Earl Pearson Jr. took the lead when polesitter Brian Birkhofer slipped high in turn two on the first lap. Birkhofer twice swapped the second spot with Dale McDowell before fading, dropping back to fourth behind seventh-starting Tim Dohm on the seventh lap. Birkhofer ended up fourth. The race's lone caution appeared on the third lap when Dan Stone's right-rear tire shredded as he exited turn four.

Outside front-row starter Steve Francis got the jump at the outset and cruised to victory with seventh-starting Clint Smith rallying to finish second. Smith's fellow fourth-row starter, Chub Frank, was third as some of the race's top contenders slipped up or dropped out. Austin Hubbard took the second spot near the race's midpoint but lost two positions on a lap-five restart. Two incidents slowed the action. Polesitter Will Vaught, who held the second spot the first half of the 10-lapper, slowed to draw a yellow on the fifth lap. A red flag waved on the third lap when tail-starting Joel Callahan's car got upside down on the frontstretch after getting into the wall just before the flagstand; he wasn't injured.

Bloomquist Race Car drivers and front-row starters John Blankenship and Jimmy Owens traded the top spot twice the first two laps before Owens edged away in search of his first Speedweeks feature victory of 2010. Blankenship fell nearly a straightaway behind to finish second while home-state driver Tyler Ivey got under Jared Landers halfway through the 10-lapper to get a third spot he'd never give up. Landers was fourth and Randy Korte a close fifth.

Outside front-row starter Josh Richards edged ahead of polesitter Dennis Erb Jr. out of turn two on the first lap and raced to victory. The top two pulled far away from the field but Erb couldn't stay in touch with Richards and settled for second while Patrick Sheltra, Shannon Babb's teammate, held the third spot all race long for the final transfer spot. Brad Neat finished fourth.

Polesitter Brady Smith jumped into the lead and cruised to a 10-lap victory in the first heat of the night. Smith won by nearly a straightaway over Wednesday's feature winner Shannon Babb while fourth-starting Steve Casebolt got the third and final transfer spot. Two former WoO champions never contended in the caution-free heat. Monday's feature winner Darrell Lanigan was fifth, just ahead of Tim McCreadie.

Brady Smith of Solon Springs, Wis., topped 63 qualifiers Saturday night at Volusia Speedway Park for the finale of the 39th annual DIRTcar Nationals by UNOH. Smith will start on the pole position of the first World of Outlaws Late Model Series heat race at the half-mile track.