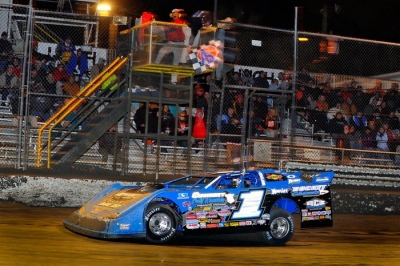 BARBERVILLE, Fla. (Feb. 11) — No one was surprised to see Josh Richards win Thursday night's 50-lap World of Outlaws Late Model Series season opener at Volusia Speedway Park. But from the 17th starting spot? Even Richards couldn't have conjured up a more exciting way to kick off his WoO title defense and capture the national tour's lidlifter for an unprecedented fourth consecutive year. | Slideshow | Complete Volusia coverage

"I was not expecting that at all," Richards said after putting on the most memorable performance of the 39th annual DIRTcar Nationals by University of Northwestern Ohio. "To have a car that good, and to start so far back and be that dominant in a race against these guys — it's just very rare. It's an awesome feeling."

Richards, 21, of Shinnston, W.Va., blasted through the field in the Rocket Chassis house car he drove to victory in last year's opener, cracking the top five on a lap-15 restart and then sliding by Brady Smith of Solon Springs, Wis., Tim McCreadie of Watertown, N.Y., and Billy Moyer of Batesville, Ark., in succession to reach second on lap 19. He quickly ran down race-long leader Earl Pearson Jr. of Jacksonville, Fla., and sailed by the home-state driver on lap 27 to assume command for good.

Pearson settled for second place, crossing the finish line 4.320 seconds behind Richards. Brady Smith was hot on Pearson's rear deck in the final laps and finished third, while McCreadie placed fourth and 2007 WoO champion Steve Francis of Ashland, Ky., advanced from the 19th starting spot to finish fifth in his Valvoline Rocket.

Richards pocketed $10,675 for what might have been the most spectacular of his 21 career WoO triumphs. He won from the 18th starting spot on Oct. 7, 2008, at Fayetteville (N.C.) Motor Speedway, but that race didn't come with the extra significance of extending an amazing streak.

"To win four openers in a row is just really cool," said Richards, who started from the pole position in 2007 and third in both the 2008 and 2009 opening-night WoO events at the half-mile oval outside Daytona Beach. "There's always the luck factor involved — and we've been very lucky here. But I feel like we earned this one too.

"To come from the back really shows how strong your team is. Matt (Barnes), Jimmy (Frey), Joe (Pilkenton), Ernie (Davis), my dad (Mark Richards), Steve Baker — they all did an awesome job."

Richards found himself mired deep in the starting field after finishing third in his heat race, but he began the feature confident he could climb forward. It didn't take him long to realize he just might be able to still pull off a victory.

"I drove a little hard in the heat and fell back to third, so I was a little disappointed in myself for that," Richards said. "But I was like, 'You know what? Just get out there and race, do what you always do.' I put the heat out of my head and just started fresh in the feature.

"The way the car felt, after a few laps I knew we were gonna be good. The car was just phenomenal. We started passing cars, but I had no idea what position we were in. Then I looked up (at the scoreboard), saw Brady (Smith) was fifth and he was right there in front of us, and I was like, 'We're up there and have a pretty good shot of running top-three.'

"After I got the lead I just tried to stay patient. Those last few laps I just about stopped going around there, and I guess going slower actually made me faster. The car was just phenomenal."

The drivers Richards vanquished certainly agreed with his assessment.

"(Richards) was extremely good tonight," said Pearson, who started third but moved up one row after polesitter Dale McDowell of Rossville, Ga., spun between turns one and two at the initial green flag. "He could roll right through that middle or wherever he needed to go. We were a little bit too tight and had to stay down there on the bottom. I don't even know where he started, but he blew by me and that's all I saw of him."

Smith, meanwhile, stood in awe of Richards's opening-night superiority but was very satisfied with his outing. He didn't even qualify for last year's opener at Volusia, putting him in a points hole for the start of his first campaign as a WoO regular.

"I don't know what it is about the opener here, but Josh has something figured out," said Smith, who started sixth. "We got tight and couldn't run the way he could, but we're very happy with third. This is a lot better start than last year."

Four caution flags slowed the event, but there were no serious incidents. After McDowell's opening-lap spin, the other cautions flew for stopped cars: Jared Landers of Batesville, Ark., on lap 15; Shannon Babb of Moweaqua, Ill., on lap 19; and Brad Neat of Dunnville, Ky., on lap 37.

The DIRTcar Nationals by UNOH is scheduled to continue Friday with a $10,000-to-win UMP-sanctioned feature on Friday, following by another $10,000-to-win WoO event on Saturday to wrap up the week of Late Model action. — Kevin Kovac

Dale McDowell and Tim McCreadie will be on the front row for the main event (correcting our earlier information; heat winners redrew for positions in the pits). Earl Pearson Jr. and Shannon Babb are on the second row with Billy Moyer and Brady Smith in row three. Series provisionals, based on last year's points, go to Tim Fuller and Clint Smith. Emergency series provisionals go to Russ King and Shane Clanton, who is expected to make just a brief appearance in the No. 26 car of Tony Knowles (instead of Clint Smith's backup, as originally expected). Jason Feger is the 29th starter with a UMP provisional.

Polesitter Tim Dohm jumped into the early lead, built a half-straightaway lead after two laps and cruised the rest of the way. Dohm's only hiccup came when he slowed in turn four midway through the race to avoid Mike Hammerle, who was heading for the infield pits. Third-starting Randy Korte ran second until slipping high out of turn four on the ninth lap, allowing front-row starter Austin Hubbard to grab the final transfer spot. Korte was third and Tim Fuller fourth in the caution-free consy.

Fifth-starting Greg Johnson rallied in the inside groove for a victory, overtaking race-long leader Eric Jacobsen in the final laps for a 12-lap victory. Jacobsen, who started outside the front row, ran the outside most of the race but dropped to the lower groove after falling to second (Jacobsen and Dennis Erb Jr. are the only drivers to compete in all 12 Georgia-Florida Speedweeks features). Polesitter Steve Casebolt battled Johnson through the race's middle stages but ended up third. The first start was scuttled when Brent Robinson and Will Vaught lost control between turns one and two.

Sixth-starting Steve Francis made up ground quickly in the low groove, overtaking polesitter Eric Wells on the sixth lap and cruising the rest of the way for a 12-lap victory. Eighth-starting Dennis Erb Jr. stayed in the tire tracks of Francis on his way to the front and got the second and final transfer spot. Fifth-starting Dan Stone made a high-side pursuit of Erb in the final laps, but he ended up falling to fourth behind Dan Schlieper on the final lap. Two cautions slowed the action; Jonathan DeHaven stopped on the frontstretch on the seventh lap, and fourth-starting Vic Coffey slowed for a lap-nine yellow.

Winning a first-lap battle of teammates starting on the front row, Earl Pearson Jr. slipped under Brad Neat exiting turn four and paced Neat the rest of the 10-lapper. Fifth-starting Eddie Carrier Jr. moved up to finish third in the final transfer spot ahead of Austin Hubbard in the caution-free prelim.

Inheriting the pole when John Blankenship was penalized for the first attempted start, Dale McDowell took advantage and raced to a 10-lap victory. Blankenship recovered to take second from Josh Richards in the early laps, while Richards dropped to fourth before regaining third from Tim Dohm with an inside pass in turn three on the seventh lap. Richards will have a lot of work to do if he plans to maintain his streak of three consecutive WoO season-opening victories; he'll started 17th in the main event.

Polesitter Shannon Babb, Wednesday's feature winner, cruised to victory in the 10-lapper over Darrell Lanigan, Monday's feature winner. They broke away from the field along with outside front-row starter Brandon Kinzer, who got the final transfer spot. Eric Jacobsen tracked Kinzer down late but settled for fourth. Steve Sheppard Jr. was in the mix for a transfer spot but got the worst of a tight restart on the third lap and never recovered. The lone caution appeared on the third lap when Will Vaught spun in turn four while running fifth. Clint Smith pulled off the track near the halfway point.

Outside front-row starter Brady Smith swept around polesitter Jack Sullivan entering turn one and never looked back en route to victory Sullivan briefly fell to third behind Chris Madden, regained the spot, then lost it again in a one-lap dash after a late caution. Sullivan fought off a last-ditch challenge from Steve Casebolt for the third and final transfer spot. Kyle Berck ran fourth most of the race, but went up in smoke with two laps remaining. Two cautions appeared, both for spins by Darren Peters on laps three and nine.

Poilesitter Tim McCreadie reclaimed the lead from fellow front-row starter Jimmy Owens with an inside move in turn four on the fourth lap and raced to victory. Owens stayed in touch with McCreadie while settling for second. Third-starting Chub Frank held off Dan Schlieper for the third and final transfer spot. Brian Birkhofer slowed with problems on the fifth lap and headed to the pits through the turn-four exit, drawing the first of two cautions. A struggling Dennis Erb Jr. got sideways briefly for another caution on the seventh lap, and Donald Beyers spun into the inside turn-four wall in avoiding Erb.

Landers tripped the clock at 15.961 seconds on the D-shaped half-mile, the only driver to crack the 16-second mark. Landers, who earned $5,000 for Monday's modified victory, will start on the pole of the first 10-lap heat race.

Reigning WoO champion Josh Richards of Shinnston, W.Va., is gunning for his fourth consecutive victory in the season opener. ... Entry fees have gone up $10 for 2010 to help defray the lab costs associated with tests for chemically-altered tires, series director Tim Christman said. ... Among newcoming drivers for Thursday's action at Volusia are Steve Casebolt of Richmond, Ind.; Jill George of Cedar Falls, Iowa; Chris Madden of Gray Court, S.C.; Tony Knowles of Tyrone, Ga.; Mike Collins of Council Bluffs, Iowa; and Shane Clanton of Locust Grove, Ga. ... Clanton is making his first start since an infection stemming from a cut on his finger that required a week-long hospital stay. He entered fellow Georgian Clint Smith's backup car but never hit the track.