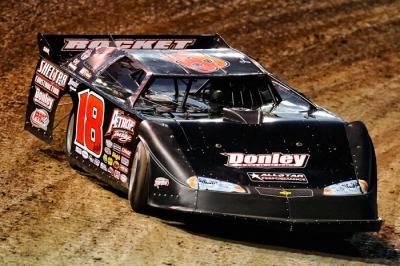 BARBERVILLE, Fla. (Feb. 10) — There was no stopping Shannon Babb on Wednesday night at Volusia Speedway Park. Babb, 36, of Moweaqua, Ill., dominated the 30-lap feature, rolling to a flag-to-flag UMP-sanctioned victory in his first night of action during the 39th annual DIRTcar Nationals by University of Northwestern Ohio. | Slideshow | Complete Volusia coverage

The polesitting Babb grabbed the lead at the initial green flag and never looked back. He easily withstood two caution flags to secure the $7,000 triumph by 2.163 seconds over fifth-starting Dale McDowell of Rossville, Ga., who inherited second place on lap 17 when Jordan Bland of Campbellsville, Ky., spun in turn four but wasn't able to challenge Babb.

"The track was just in my favor tonight," said Babb, a two-time champion of the grueling DIRTcar UMP Summernationals tour. "When that bottom lane is dominant, it's really hard to pass. So I just sat there and cruised.

"My guys were sitting here (in the infield) communicating with me real good and I could understand them, and that put me in the driver's seat where I could just relax, breathe and drive the car."

Babb ended a long victory drought with his standout performance, winning for the first time since July 10, 2009, in a Summernationals event at Waynefield (Ohio) Motorsports Park. In addition, Babb scored his first win at Volusia behind the wheel of a Rocket Chassis car. His last win at the half-mile oval, on Feb. 14, 2007, came in a Rayburn mount.

"We learned a lot here over the last couple of years in this Rocket Chassis," Babb said. "It's getting more to where I know what to do all the time (with a Rocket), more consistent. I'm real happy with the car."

According to Babb, Sheltra plans to climb behind the wheel of a team car to compete in the World of Outlaws Late Model Series season opener on Thursday night (Feb. 11) at Volusia.

The race's two caution flags were for minor incidents. Tim McCreadie of Watertown, N.Y., was left sitting in turn two on lap one after a scrape with Mike Knight of Ripley, N.Y., and Bland suffered the heartbreak of the evening when he lost control of his fleet car on lap 17 and spun out of second place — a position he had held from the start — while chasing Babb.

Notes: Babb's Rocket Chassis is sponsored by Sheltra Construction, Donley Trucking, Petroff Towing and Allstar Performance. ... Partner Patrick Sheltra, an ARCA racer from Indiantown, Fla., joined Babb in victory lane. ... Babb's best previous Georgia-Florida Speedweeks finish was third on Feb. 3 at East Bay Raceway Park near Tampa, Fla. ... Last-row starting Randy Korte's No. 00 lost a left-front wheel during the pace laps because the lugnuts weren't tightened; he rejoined the field a lap down with hand-tightened lugnuts hoping to complete a lap, but the wheel came off again to draw a caution on the restart. ... Clint Smith pulled off the track under green on the third lap. ... Wendell Wallace slowed and pulled off on the seventh circuit. ... Earl Pearson Jr. pulled off at the halfway point.

Outside front-row starter Jack Sullivan and polesitter Austin Hubbard held the top two spots all 10 lap to transfer to the main event. Brent Robinson finished a distant third in the final consy. Hubbard cut into Sullivan's lead late and the frontrunners were running just behind a late-race tangle in turn three when Kevin Colston made contact with Darren Peters, who went skidding into the outside guardrail.

Polesitter Earl Pearson Jr. cruised to victory in a caution-free consy with fellow front-row starter Randy Korte getting the second and final transfer spot. Third-starting Tommy Kerr couldn't make a serious challenge of Korte and settled for third with Stacy Boles further back in fourth.

In a consolation where race-long leader Brady Smith broke and spun high in turn four just before taking the checkered flag, Tim McCreadie captured the victory. The fifth-starting McCreadie took second from Steve Sheppard Jr. on the third lap, but he was a straightaway behind the outside front-row starting Smith throughout the 10-lapper. A cruising Smith was entering turn four on the final lap when he slid high in turn four amid a plume of smoke with flames briefly coming from under his No. 2. Smith's car was pushed off the track before a one-lap shootout that McCreadie won while Eric Jacobsen got second in a tight battle for the runner-up spot. Jacobsen glided high out of turn four in front of Kyle Berck, and Berck wasn't able to get back by as Chub Frank and polesitter Steve Shepherd Jr. were in the mix, too.

Polesitter Rick Eckert built a half-straightaway lead by the halfway point and cruised to an eight-lap victory. Outside front-row starter Eddie Carrier Jr. was second, just ahead of Billy Moyer, who took the third and final transfer spot. Jack Sullivan was a distant fourth.

Polesitter Dale McDowell, who survived a couple of serious challenges from Jimmy Owens, raced to a victory in the second-to-last heat. Owens outdueled front-row starter Mike Knight on the final lap (a one-lap dash following a caution) for second while Knight got the final transfer spot ahead of Austin Hubbard. The race's lone caution appeared Brian Nuttall Jr. spun between turns three and four on the final lap, and the McDowell-Owens lead battle nearly came up on the spun car too quickly before both took evasive action.

Polesitter Josh Richards led just the final lap, overtaking race-long leader Tim Fuller on a one-lap dash to the finish after a late caution. Fuller finished second with fourth-starting Wendell Wallace in third for the final transfer spot. Bub McCool picked up ground to finish fourth. The first caution of the heat races appeared on the last lap when Vic Coffey spun in turn two while battling Randy Korte for fourth.

Jordan Bland won the race into turn one with polesitter and fellow Kentuckian Eric Wells and raced to victory in the third heat. Wells. ran a steady second while Clint Smith took the third and final transfer spot from Tommy Kerr on the fifth lap with an inside pass. Earl Pearson Jr. also got past Kerr but couldn't track down Smith in the final laps.

Polesitter Dennis Erb Jr. led all eight laps with third-starting Dan Schlieper racing to a second-place finish. Fifth-starting Darrell Lanigan, Monday's feature winner, nearly tangled with Schlieper in turn three midway through the race but held on to get the third and final transfer spot in the caution-free race. Brian Birkhofer, who led half of Monday's feature, didn't make the feature lineup.

With heat races starting straightup instead of the four-car inversion employed Monday, overall fast qualifier Shannon Babb cruised to an easy victory in the first prelim. He built a straightaway lead after just three laps to run uncontested in the eight-lapper. Sixth-starting Brandon Sheppard overtook third-starting Brad Neat on the last lap to finish second while Neat got the third and final transfer spot in the caution-free prelim.

Shannon Babb of Moweaqua, Ill., was the fastest of 68 entrants Wednesday for UMP-sanctioned Late Models at Volusia Speedway Park's DIRTcar Nationals by UNOH. Babb blazed to a lap of 16.523 seconds on the D-shaped half-mile on a chilly night in central Florida. The top three finishers from each of six heat races advance to the main event with three consolation races sending two cars apiece to the 24-car starting field for the 30-lap main event. The feature pays $7,000 to the winner.

Drivers received separate hot laps and qualifying on Monday night, but Wednesday's hot laps and qualifying were held simultaneously with a half-dozen cars at a time. ... Dillan White spun in turn two during the first session, collecting Steve Sheppard Jr.; both cars suffered extensive damage. ... Chub Frank had a flat tire as he concluded his time trials. ... Brian Birkhofer got into the frontstretch wall when he got too high out of turn four in time trials; because he didn't go to the infield scales, his best lap was scrubbed. ... Chuck Julien spun into the turn-four entrance in his time trial session. ... Jason Feger slowed near the end of his time-trial session with a flat right rear. ... Mason Zeigler got into the frontstretch wall during time trials. ... Among newcomers for Wednesday's action are two-time Dirt Track World Champion Shannon Babb of Moweaqua, Ill., Roy Mitchell of Hobart, Ind., and Greg Johnson of Mitchell, Ind., a former DIRTcar Nationals champion. ... More than 40 big-block modifieds are also in action.