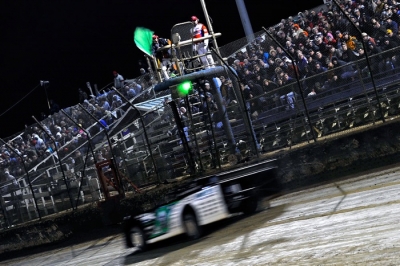 Scott Bloomquist leads the field on one of many restarts. (thesportswire.net)

"i think this is going to be my year," said Bloomquist, who already has two victories after winning just five races all of last season. "We learned to much last year and tested, and tested, and tested, and made a lot of mistakes but still ran in the top three a lot. We finally got dialed in enough and figured out where we were messing up, and everything's really running good."

The $5,000 winner was fortunate to be out front and clear of several scrambles behind him on a night when a moisture-laden racing surface and heavy cushion caused problems that contributed to 11 cautions, most of them in the first half of the 30-lapper.

The race finally got rolling past the halfway point with Bloomquist pulling away easily from Dennis Erb Jr. of Carpentersville, Ill., who started seventh but moved up to second amid a turn-two accident on the eighth lap.

Erb finished a third-track margin behind in second while sixth-starting Matt Miller of Waterville, Ohio, raced to a third-place finish. Dan Schlieper of Sullivan, Wis., who started 18th in a race where several top-five running cars were eliminated, ended up fourth and Ray Cook of Brasstown, N.C., who started next to Schlieper in the ninth row, rounded out the top five.

Eric Jacobsen and Don O'Neal were running second and third on the eighth lap when they briefly got hung together exiting turn two after a slowing Steve Casebolt forced Bloomquist and other frontrunners to check up. Jacobsen pulled pitside and O'Neal tried to restart before a flat left-front tire forced him out, too.

Bloomquist notched his third career victory at East Bay, a track where he's struggled with a 17-year drought between victories in 1990 and '07. But he's looking forward to a pair of $10,000-to-win and a $12,000-to-win event the final three days of the Winternationals. "I don't think we're going to get embarrassed like we have in the past," said the 46-year-old Hall of Famer from Mooresburg, Tenn.

The race was slowed by nearly a dozen cautions, the most serious for a turn-three scramble when fourth-running Chris Wall got sideways in front of Matt Miller, triggering more minor collisions back in the pack.

Fourth-running Jason Feger got sideways in turn three to draw a caution flag on the ninth lap and other yellows appeared when Austin Hubbard spun before the initial start, Brandon Thirlby ended up against the turn-three on lap two (Terry Casey also headed pitside with a flat tire) and Danny Mitchell spun on the backstretch on lap three. Steve Shaver slowed for a lap-14 yellow, Josh Richards slowed on the restart after getting into the turn-two cushion and Austin Hubbard pulled up lame in turn four on the 16th lap. The final caution appeared on the 20th lap for Tim McCreadie's turn-two spin.

The Late Model portion of the Dart Winternationals continues Wednesday a $5,000-to-win event, the third of six Lucas Oil-sanctioned races.

Justin Rattliff got the Dart-sponsored provisional for the fastest qualifier not already in the feature. ... Danny Mitchell won the Strawberry Dash for non-qualifiers, topping Chad Hollenbeck and Shannon Babb. Mitchell transferred to his first East Bay feature. ... Polesitter Jim O'Hara spun on the initial start, then lost control in turn one and rolled before his car returned to its tires; he wasn't injured. ... Monday's feature winner Mike Marlar, who swapped rear ends before Tuesday's racing, had brake problems in time trials. Marlar skipped his heat race and ran a few laps in the consolation race to make sure the team got the car fixed. He pulled onto the track for the Strawberry Dash but never got up to speed. ... John Blankenship is starting on the tail of the tail, apparently because he's fielding a backup car. ... Eric Jacobsen's car lost power when the field rolled onto the track and he was pushed to the pits; Jacobsen pulled back on the track and resumed in his third starting spot.

Polesitter Dan Schlieper won a caution-free 12-lapper with fellow front-row starter Dan Stone in pursuit all the way. Stone got second with Dillan White was a distant third, just ahead of Eric Wells as four drivers transferred.

Ray Cook cruised to victory from outside the front row in the 12-lapper while the other transfer spots were in doubt behind him. Polesitter Steve Shaver managed to hold on to second the whole way, fighting off challenges from Brandon Thirlby, who was third. Steve Casebolt for the fourth and final transfer spot over Tyler Reddick, who started fourth but jumped the turn-two cushion on the first lap and fell back to sixth. Sixth-starting Shannon Babb held the fourth spot on the third lap but got hard into the turn-two cushion, the car bounding briefly into the air; Babb slowed for a caution in turn four.

Outside front-row starter Tim Isenberg repelled repeated challenges from polesitter Chris Wall for a 10-lap victory. Wall pulled alongside on the sixth lap, but couldn't complete the pass. Wall almost ran into trouble with the lapped car of Leon Henderson on the backstretch of the final lap, but slipped by to keep Kyle Berck in third. Tim McCreadie was fourth for the final transfer spot. Monday's feature winner Mike Marlar, who struggled in qualifying, didn't make the call.

Polesitter Scott Bloomquist cruised to an easy victory while fellow front-row starter John Blankenship struggled to survive a mid-race slipup. Blankenship ran second the first half of the race but got too high out of turn two, allowing Matt Miller past on the backstretch. Miller finished a straightaway behind Bloomquist in second while Blankenship gathered up his car and pressured Miller in the late laps. Terry Casey got the fourth and final transfer spot over Dan Schlieper. Fourth-starting Dillan White had a poor start and finished eighht and fifth-starting Dale McDowell slowed on the third lap with a flat tire, the second night in the row a flat has knocked him out of a prelim.

Outside front-row starter Eric Jacobsen beat polesitter Dennis Erb Jr. into turn one and led all the way for a 10-lap victory in a caution-free prelim. Erb was second on a track with heavy moisture that made passing difficult as everyone maintained high speeds. Josh Richards was a close third while further back, Jason McBride edged Ray Cook for the fourth and final transfer spot.

Polesitter Don O'Neal, who rallied from 20th to seventh last night, outjumped fellow front-row starter Jason Feger at the outset and raced to a victory in a prelim where the top four and transferring drivers ran away from the field. Feger was second with Austin Hubbard just behind in third and Billy Moyer further back in fourth. Steve Shaver, who battled early with Brandon Thirlby, finished a distant fifth. Tail-starting Tim Dohm pulled out midway through. A minor turn-one scramble brough out a lap-one caution.

Final qualifier Scott Bloomquist of Mooresburg, Tenn., topped 43 cars in time trials Tuesday for the second round of the Dart Winternationals at East Bay Raceway Park. Bloomquist, the reigning Lucas Oil Late Model Dirt Series champion making his first series start of 2010, blazed to a lap of 14.875 seconds at the third-mile oval.

Bloomquist hinted that he might not have raced if he didn't get a front-row starting spot in a heat race. "We really just got the car out to shake it down and see how we're going to fare at the end of the week," he said.

Monday's winner Mike Marlar struggled on both his qualifying laps, timing in nearly two seconds slower than Bloomquist, and will have to fight from deep in a heat race to transfer to the main event.

Drivers were given two qualifying laps on Tuesday instead of the one customarily given when car counts are higher. ... Newcomers for Tuesday's action are reigning Lucas Oil champion Scott Bloomquist, John Blankenship and Mike Collins, who plans on chasing the series rookie title. ... Canadian youngster Ricky Weiss is sitting out Tuesday, awaiting a replacement powerplant after engine problems on Monday. ... Austin Hubbard and Chris Wall were among drivers swapping to backup motors Tuesday. Wall sent the damaged engine back to Louisiana for repairs, and it's supposed to be back Thursday. ... Monday's winner Mike Marlar changed a rear end in his No. 34 on Tuesday. Marlar knew he had brake problems during Monday's feature, but further inspection found problems with the axle that triggered the brake issues, forcing the rear end change. ... Lucas Oil Series director Ritchie Lewis encouraged drivers to get fitted for a head-and-neck restraints with a representative from Safety Solutions at East Bay. The series plans to mandate head-and-neck restraints in September.