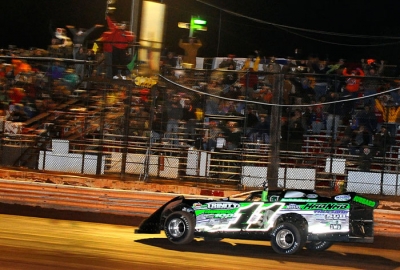 BRUNSWICK, Ga. (Jan. 30) — All the off-season talk centered on Austin's Hubbard's plans to drive Dale Beitler's No. 19 in 2010. But before his first start in that potent car, Hubbard made some big news in his family-owned No. 11.

Leading all the way from the pole, the 17-year-old Hubbard of Laurel, Del., earned a career-high $12,000 for a victory in the Southern All Star-sanctioned finale of Golden Isles Speedway's Super Bowl of Racing VI, the first round of Georgia-Florida Speedweeks. The teen's first series victory drew raucous cheers from the bundled-up crowd on a chilly evening. | Slideshow | Complete Golden Isles coverage

Hubbard led by more than a straightaway most of the race, but faced challenges from Hall of Famer Scott Bloomquist over the final 19 laps in racing to the 60-lap victory at the 4/10-mile oval in southeast Georgia.

"I know how Scott is at the end of races, so I was just hoping I could hold on," Hubbard said in victory lane after stripping off the top of his driver's suit on the frontstretch and running around in a Ricky Bobby's I'm-on-fire celebration, flapping his arms wildly. "I knew who was behind me ... but I was just trying to worry about hitting my marks and doing the best I could, and if I didn't win, that's all I had. I did my best."

Hubbard, who won a single race last year but became the second youngest World 100 starter in history, survived a two-lap shootout after a late caution for the victory. He hugged the inside groove the final 19 laps to fight off Bloomquist, who took a few peeks inside in the race's late stages.

The sixth-starting Bloomquist, Thursday's $7,500 winner, settled for second with Friday's winner Josh Richards of Shinnston, Dan Schlieper of Sullivan, Wis., and Dennis Erb Jr. of Carpentersville, Ill., rounding out the top five. The 19th-starting Richards, up to fifth by lap 41, took third from Schlieper in the final laps as the pair made contact.

Two drivers who ran up front early were mid-race dropouts. Jonathan Davenport of Blairsville, Ga., ran second most of the way before pulling to the pits on lap 39, and outside front-row starter, John Henderson of Aiken, S.C., who ran third in the first half of the race, had a flat tire on lap 41. Davenport's consolation came in the form of a 40-lap victory worth $3,000 in the weekend-ending National Late Model Series feature.

Hubbard led 10 laps of Thursday's opener before Bloomquist blew past en route to victory. Although Bloomquist nosed close enough for Hubbard to realize who was on his tail, the teen kept his cool.

"Those last 15 laps, I really felt like I was in the best groove of the whole night," Hubbard said. "I was really concentrating those last 15 laps to make sure that I'm not giving up anything anywhere. I don't know if we were the fastest car right at the end, but we didn't make any mistakes."

Said Bloomquist: "He's ran good all week. He did keep his composure. He did make a few mistakes, and his tires were hot enough that he could afford to, and mine had already gotten hot enough that I couldn't take advantage of it. ... I congratulate him. He did a heckuva job."

The feature was slowed by four cautions, none for serious incidents. Justin Rattliff and Jeremy Faircloth spun in turn four for the first caution on lap two, while Jimmy Owens and Tim Dohm were spinners on the lap-two restart. John Henderson slowed with a flat tire on lap 41, and slowed for another yellow on lap 58.

Earl Pearson Jr. was required by track and series officials to change his right rear tire following driver introductions. Race director Kelley Carlton didn't reveal why, but officials were using a detector for tire-softening chemicals. ... Justin Rattliff is racing despite stepping on a screw in his pit area. He was checked by medical personnel, who recommended he get a tetanus shot later tonight. ... Outside front-row starter John Henderson is most noteworthy in Super Late Model racing for setting fast time at a World of Outlaws Late Model Series event last August at Screven Motor Speedway in Sylvania, Ga., but he was stripped of the time because officials ruled he used an illegally-treated tire. He was suspended 30 days from WoO competition.

Southern All Star provisionals are going to Brad Neat and Chris Ferguson. Offiiclals initially awarded one of the provisionals to Chesley Dixon, passing over Ferguson because they thought he had scratched for the night (Ferguson skipped his consolation race and turned in his scoring transponder). Ferguson pulled on the frontstretch for the feature with a car that has no sheetmetal on either doorpanel.

Third-starting Vic Coffey overtook polesitter Justin Rattliff with an inside move in turn four on the fifth lap. Coffey went on to victory while Tim Dohm finished second. Rattliff faded to third but held off Jason Feger for the final transfer spot.

Outside front-row starter Scott Creel raced to an easy victory while Josh Richards and Randy Weaver battled behind him. Richards got second with Weaver taking the third transfer spot as the two drivers, who both wrecked in their heat race, left it all on the track with a feisty last-lap duel. Fourth-starting Brad Neat's race ended on the initial start when he lost a wheel and ended up in turn one. Neat received a provisional starting spot for the feature.

Polesitter Eric Jacobsen, overcoming potential problems with an engine that popped occasionally down the frontstretch, raced to victory while surprising Brian Nuttall Jr. finish second. Fourth-starting Jimmy Owens was third and outside front-row starter Tim McCreadie, who got a poor start, was fourth in the caution-free prelim.

In a battle of Barry Wright Race Cars, Jonathan Davenport outdueled Dennis Erb Jr. in a race-long battle among front-row starters. Davenport led all the way, but just barely at times in a classic showdown until Erb slipped up on the eighth lap. They were both far ahead of third-finishing Steve Shaver while Steve Francis for the fourth and final transfer spot. Brad Neat, who was fourth in the weekend's previous two features, was sixth and will head to a consolation race.

John Henderson, who has a single career Late Model victory (in a Crate division), outdueled polesitter Scott Bloomquist in the early laps and grabbed a 10-lap victory. Henderson and Bloomquist ran side by side with Henderson edging away after three laps. Fourth-starting Earl Pearson Jr. finished third, just ahead of fifth-starting Jeremy Faircloth, who made his first feature of the weekend with the final transfer spot.

Outside front-row starter Austin Hubbard cruised to a 10-lap victory, breaking away when polesitter Chris Ferguson briefly lost control in turn one on the second lap. Seventh-starting Dan Schlieper benefitted from attrition to finish second while Shannon Babb, making his first GIS start of 2010, was third. John Blankenship got the fourth and final transfer spot in a race where only four cars finished (Mark Davis pulled to the infield on the last lap). Three cautions slowed the action, all in turn two and each one involving one of the top four starters. On a lap-three restart, Ferguson got into the guardrail after a tangle with Shannon Babb. On the third lap, second-running Randy Weaver got too high exiting turn two and briefly climbed the guardrail. The first yellow appeared on the first attempted start when Josh Richards slipped high and slammed the turn-two guardrail and tire barriers, not unlike Kelly Boen's wreck last year. His car briefly bounded into the air so fans on the frontstretch could see the underneath the Rocket Chassis house car, but Richards wasn't injured.

He'll be among four heat race polesitters later Saturday evening in a list that also includes Thursday's winner Scott Bloomquist of Mooresburg, Tenn., Friday's runner-up Dennis Erb Jr. of Carpentersville, Ill., and Eric Jacobsen of Seacliff Beach, Calif. The top four finishers in each of four heats advance to the Southern All Star Dirt Racing Series main event along with three cars apiece from each of two consolations. Two provisional starters round out the 24-car field. The 60-lap feature pays $12,000 to the winner.

Dean Bowen (blown motor) and Ben Faircloth scratched from time trials. ... Besides the Southern All Stars, National Late Model Series competitors are in action for a $3,000-to-win event. ... Ferguson's quick time was the fastest of the week. ... The three Golden Isles events are averaged and count as a single points race for the Southern All Star title chase.