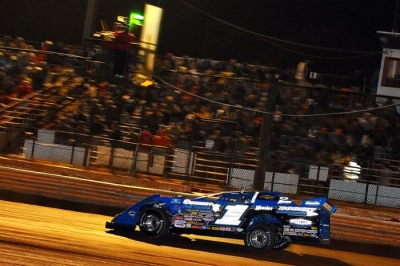 BRUNSWICK, Ga. (Jan. 29) — Outside front-row starter Josh Richards of Shinnston, W.Va., regained the lead from Dennis Erb Jr. amid traffic on the 14th lap and led the rest of the way for a 50-lap victory in the second round of the Golden Isles Speedway's Super Bowl of Racing IV. The 21-year-old Richards earned $10,000 for his first career Southern All Star Dirt Racing Series victory. | Slideshow | Complete Golden Isles coverage

"I've been trying here the last couple of years. Last year, we were fifth no matter what we did," Richards said. "And last night, it wasn't looking very promising. So we worked on the car a little bit today. I messed up a little qualifying. ... but to be able to get through the heat race and get a good starting spot, that was key I think to winning tonight."

Richards started outside the front row and took command early, but Erb worked him hard for three laps before going ahead on the fifth circuit. Erb edged away for several laps, but his move outside a lapped car cost him when Richards dove low in turn one to regain the lead on lap 14.

Richards pulled away from Erb after a caution just before the midway point, but the blue Rocket Chassis house car of Richards dominated the rest of the way, building a straightaway edge after 40 laps and heading toward victory despite battling a fogged-up faceshield much of the way.

"We were pretty good there early in the race there, and then the car kind of faded away a little bit," Erb said. "I might've been a little soft on tire."

The fifth-starting Erb, of Carpentersville, Ill., held on to finish second, inches ahead of Thursday's opening night winner Scott Bloomquist of Mooresburg, Tenn., who started 10th. Polesitter Brad Neat of Dunnville, Ky., finished fourth for the second straight night and ninth-starting Jimmy Owens of Newport, Tenn., rounded out the top five after taking a spot from Earl Pearson Jr. in the final laps.

The feature was slowed by three cautions, none for serious incidents. A yellow flag appeared on the first attempted start when Chris Ferguson slowed in turn two while Dennis Erb Jr. and Dean Bowen got together between turns three and four. On the third lap, Shan Smith and Chesley Dixon tangled in turn four, collecting Chris Madden. And Vic Coffey's shredded right-rear tire brought out a lap-23 yellow.

On the undercard, William Thomas of Phenix City, Ala., earned $3,000 for a National Late Model Series victory.
The Super Bowl of Racing VI is scheduled to wrap up Saturday with a $12,000-to-win Southern All Stars feature and another $3,000-to-win NLMS feature.

Third-starting John Blankenship went from third to first on the seventh lap and raced to victory. Shan Smith led the first five laps, but Scott Creel took command with an inside pass. But Creel's car stumbled and slowed just after he took the lead, and he pulled to the infield as Blankenship and Smith raced on to finish first and second. The third and final transfer spot went to Chesley Dixon, who barely fought off Brian Nuttall Jr., a late entry who missed heat races. No cautions slowed the race, but Doug Sanders made hard contact with the turn-four guardrail on the third lap; he steered his wadded up car to the infield.

Polesitter Steve Shaver led all the way, taking the checkers a straightaway ahead of Ben Faircloth. Justin Rattliff was just behind Faircloth in third to get the final transfer spot as he held off a furious challenge from Tim Dohm.

Steve Francis inherited a victory in the fourth heat after reigning Southern All Star champion Randy Weaver came up 10 pounds light at the scales. Weaver, who started outside the front row, won a three-lap side-by-side battle with polesitter Austin Hubbard to take command and win the race to the checkered flag. The third-starting Francis pressured Weaver a few laps before crossing the line second while Hubbard, who recovered from a near-spin in turn three, was next. Eric Jacobsen and Chris Ferguson, with Weaver's disqualification, were bumped up to third and fourth in the final rundown. Weaver is in line for a series provisional.

After surviving a spin on the initial start, polesitter Jonathan Davenport cruised to an easy 10-lap victory, taking the checkers with a third-track margin. Outside front-row starter Dean Bowen was third followed by Royce Bray and sixth-starting Dan Schlieper, who got the final transfer spot. The first start was scrapped when Davenport, racing side-by-side with Bowen, spun in turn two, collecting Jeremy Faircloth, Danny Mitchell and Dale Hammond. The cars of Faircloth and Mitchell were towed away.

Fourth-starting Josh Richards turned up the heat after an early restart, worked on polesitter Earl Pearson Jr. for four laps and then took command on the sixth lap. Pearson, who ran side-by-side with Richards before losing the top spot heading into turn three on the sixth lap, ended up second while eighth-starting Scott Bloomquist rallied to finish third after a subpar qualifying effort. Front-row starter Tim McCreadie, who lost a spot to Bloomquist on the sixth lap, got the fourth and final transfer spot. One caution slowed the action when on the second lap, third-starting John Henderson lost control in turn three and spun, collecting an onrushing Jason Feger, who started on the tail. Henderson's car was towed off and Feger's machine, which suffered heavy right-side damage, headed for the pits.

Outside front-row starter Brad Neat got the jump on polesitter Dennis Erb Jr. and cruised to an easy victory. Erb fought off stiff challenges from Jimmy Owens and edged away to finish second with Owens in third. Vic Coffey got the fourth and final transfer spot. Fifth-starting Tim Dohm got into the turn-four wall midway through the race and pulled to the infield.

Dennis Erb Jr. of Carpentersville, Ill., topped 35 qualifiers Friday night at Golden Isles Speedway in the second round of the Super Bowl of Racing VI. He'll start on the pole of the first heat race in preliminaries for the night's 50-lap Southern All Star Dirt Racing Series feature paying $10,000 to the winner. Other polesitters for heat races are Earl Pearson Jr. of Jacksonville, Fla., Jonathan Davenport of Blairsville, Ga., and Austin Hubbard of Seaford, Del. Last night's feature winner, Scott Bloomquist of Mooresburg, Tenn., was just the 30th quickest qualifier.

The top four finishers from each of four heat races transfer to the 24-car main event. Three cars apiece from each of two consolations and two provisionals complete the starting field. The National Late Model Series is also in action with the Limited Late Models running for a $3,000 winner's prize.

With rain in the forecast for Saturday, Golden Isles owner Frankie Lloyd is considering running an early afternoon makeup race Sunday. At the drivers' meeting, the reception of the possibility seemed mixed among teams, many of whom would otherwise head to a Sunday practice at East Bay Raceway Park in Gibsonton, Fla. Lloyd would likely make a decision on a possible Sunday makeup Friday night, said Southern All Star race director Kelley Carlton. ... Three newcomers joined the Golden Isles action, Jason Feger of Bloomington, Ill., Tyler Reddick of Corning, Calif., and Dillon Wood of New Smyrna Beach, Fla. (driving the No. F1 that Keith Freeman drove Thursday) .... Friday afternoon, Feger and Thursday's winner Scott Bloomquist chatted in the pits. "You got some horsepower," Bloomquist asked Feger. "Yeah, the same thing I had at Lowe's," replied Feger, who battle up front with Bloomquist at Concord, N.C., in November. "Then you've got it," Bloomquist said. ... Jonathan Davenport was the fast qualifier in NLMS time trials, but he was disqualified for using a tire softener.