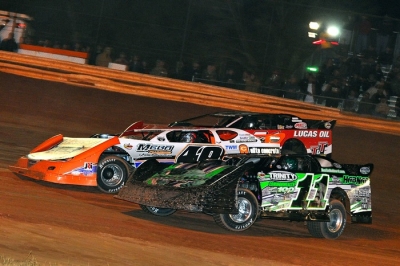 Austin Hubbard (11) makes a three-wide pass for the lead. (thesportswire.net)

So even though Bloomquist was rolling in the high groove Thursday while tracking leader Austin Hubbard, when he got the chance to make a low-groove pass, Bloomquist jumped at the chance at the 4/10-mile oval in southeast Georgia.

"It was the safest way to pass him," said the 46-year-old Hall of Famer from Mooresburg, Tenn.

The lap-26 pass underneath Hubbard heading into turn three gave him a lead that lifted him his seventh career victory in Super Bowl history and the 23rd of his Southern All Star Dirt Racing Series career. Bloomquist, who earned $7,500, has at least one victory in five of the six Super Bowls of Racing at Golden Isles, a track where his self-designed race cars shine.

"I'm telling you what, it's different every time you get on it, though," Bloomquist said. "We're doing different stuff than we were last year. We got our program really good. We struggled a little last year. We've tested a lot, learned a lot, I think we're ready for this year.

Fast qualifier and polesitter Jonathan Davenport of Blairsville, Ga., who led the first 10 laps before losing the point to Hubbard amid a three-way tussle including front-row starter Brad Neat, came back to finish second in the opening Georgia-Florida Speedweeks event. Hubbard, a 17-year-old from Seaford, Del., fielding his family-owned No. 11, was third with Neat, a Dunnville, Ky., driver making his first start with Bobby Labonte Motorsports, finished fourth.

Davenport had a half-straightaway lead after five laps, but Neat and Hubbard caught him amid traffic with Hubbard slipping under both cars to lead the 11th lap. Hubbard built a comfortable lead while the eighth-starting Bloomquist worked his way up to second by lap 19.

Five laps later, Bloomquist was flying in the high groove and plotting his lap-26 overhaul of Hubbard, whose soft-compound tires were giving up.

"I knew he'd pretty much committed to the bottom, and I knew I was going to go by him on the top, but I had such a run that lap, instead of getting beside him and him coming off the bottom — and taking a chance to get pinched in the fence like what happened to me last year — I decided I had enough of a run I was going to go ahead and take it," Bloomquist said.

Hubbard knew his tire choice made him vulnerable, but it was no less shocking when Bloomquist's No. 0 flashed past entering turn three.

"It was really just an explosion of the zero in my face — out of nowhere. He didn't do anything wrong. I didn't know he was there and I was just kind of riding along," Hubbard said. "My tires were chattering real bad and the oil light was blinking every now and then because of the tires. I was like, 'Oh my gosh.' I was just waiting it out and all the sudden he just shoots through.

"The car was great. We took a gamble. I really think it paid off. We might not have won, but we showed what we were coming here to do this week."

The race was slowed by four cautions, none for serious incidents. Neat's turn-four spin triggered a turn-four scramble on the first attempted start. Chris Ferguson spun in turn two to draw a lap-15 caution and was towed away. Fourth-starting Eric Jacobsen slowed in turn two for a lap-30 yellow and Steve Shaver spun in turn four on lap 36.

Super Bowl of Racing VI action for the Southern All Stars continues with a $10,000-to-win feature Friday and $12,000-to-win finale Saturday.

Notes: The winning Bloomquist Race Car is sponsored by Hawkeye Trucking, Sweet Mfg., and Allstar Performance. ... Randy Weaver of Crossville, Tenn., making his first start in a Bloomquist Race Car, rallied from 10th to finish fifth. ... The event drew a respectable crowd, perhaps the best of any weeknight crowd for the Super Bowl of Racing in the past three seasons. ... Tyler Ivey of Tallahassee, Fla., won the night's undercard, earning $3,000 for a victory in the National Late Model Series feature. NLMS drivers go for $3,000 each of the next two nights.

Third-starting Josh Richards slipped under polesitter Chris Ferguson on the sixth lap and led the rest of the 10-lap consy. Richards pulled away to win a straightaway ahead of Ferguson while John Henderson got the third and final transfer spot.

Outside front-row starter Justin Rattliff got a good jump at the outset and raced to victory, holding off a late charge from third-starting Vic Coffey. Coffey settled for second with polesitter Scott Creel getting the third and final transfer spot.

Eric Jacobsen outran polesitter and chassis builder Scott Bloomquist for a 10-lap victory. Bloomquist was all over Jacobsen in the early laps, but edged away after Bloomquist slipped briefly in turn two midway through the race. Third-starting Tim Dohm was third while Dean Bowen came up from fifth to get the fourth and final transfer spot over John Blankenship. Only six cars started after a pair of scheduled starters scratched.

Steve Francis outjumped polesitter and fellow front-row starter Dennis Erb Jr. and stayed in control all the way for a 10-lap victory. The top two finished a straightaway ahead of Steve Shaver, who was third in his debut with the K&L Rumley Enterprises team. Jimmy Owens endured a race-long duel with fellow Bloomquist Race Car driver Justin Rattliff for the final transfer spot, hanging on by a half-length on the final lap.

Outside front-row starter Brad Neat got the jump on polesitter and Bobby Labonte Motorsports teammate Earl Pearson Jr., and raced to a narrow victory in the 10-lapper. Pearson was all over Neat near the midway point before slipping up in turn four, allowing Neat to edge away. Pearson took one last stab on the final lap but fell short. Fifth-starting Randy Weaver slipped by Chris Madden and Chris Ferguson with a pair of late-race passes to finish third, while Madden got the fourth and final transfer spot. Ferguson will go to a consolation race along with fourth-starting Josh Richards, who never contended.

Fast qualifier and polesitter Jonathan Davenport cruised to an easy victory in the first heat, building a straightaway lead halfway through the 10-lapper and pulling away. Dan Schlieper, who inherited a front-row starter spot after Austin Hubbard jumped two starts, lost the runner-up spot to Hubbard on the final lap and ended up third. Tim McCreadie was the fourth and final driver transferring to the main event. Davenport's victory puts him on the pole for the 40-lap feature.

Jonathan Davenport of Blairsville, Ga., the last of 34 qualifiers, topped Southern All Star Dirt Racing Series time trials Thursday night in the first round of the Super Bowl of Racing VI at Golden Isles Speedway. Davenport posted a lap of 15.639 seconds on the 4/10-mile oval, which opened Georgia-Florida Speedweeks with a 40-lap event scheduled to pay $7,500 to the winner.

Davenport will start on the pole of the first of four heat races at the southeast Georgia oval. Other drivers starting on the pole of heats are Earl Pearson Jr. of Jacksonville, Ill., Dennis Erb Jr. of Carpentersville, Ill., and Scott Bloomquist of Mooresburg, Tenn.

The car count of 34 Super Late Models is 18 fewer than last year's lowest count. Last year's four races drew 58, 59, 60 and 52 cars. ... Fifth-quick qualifier Austin Hubbard will follow the World of Outlaws Late Model Series this season in the Dale Beitler-owned No. 19, but he's piloting his family-owned No. 11 at Golden Isles. ... Steve Shaver of Vienna, W.Va., was made his first career start for the K&L Rumley Enterprises No. 6, qualifying 11th quick. ... Casey Roberts scratched after breaking an engine and was apparently heading home. ... The 24-car feature lineup will be set by the top four finishers of each heat race, three cars apiece from two consolations and two provisionals starters (based on '09 Southern All Star points, or, if no series regulars are eligible for provisionals, they'll be based on the fastest qualifiers not already in the race). ... Fans can purchase tickets for two-seater rides on the Golden Isles oval on Thursday with Randy Weaver behind the wheel of a William Scogin-owned car. ... Part of Thursday's race meeting was made up of race director Kelley Carlton explain penalties and fines if drivers are caught using tires softened by illegal chemicals. ... Tires of the top eight qualifiers were to be checked in the infield after qualifying, and the feature winner's tires each of the three nights at Golden Isles would be impounded for inspection. ... The National Late Model Series for Limited Late Models is also in action for a $3,000-to-win event; 42 cars entered.